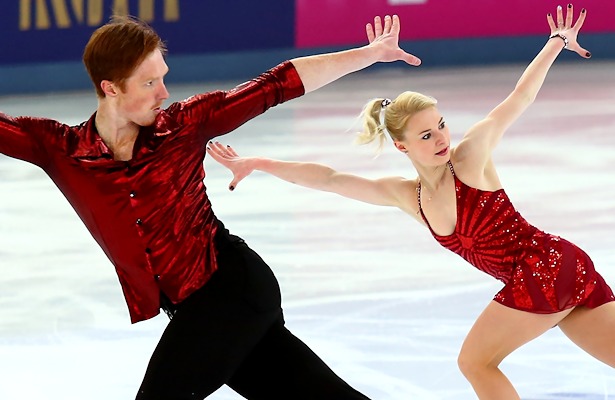 Evgenia Tarasova and Vladimir Morozov skated to the lead in the Pairs Short Program at the 2019 Russian National Championships on Thursday. Natalia Zabiiako and Alexander Enbert follow not far behind in second place, while Aleksandra Boikova and Dmitri Kozlovskii came in third. It was a high-level event with many strong performances.

“We skated well in the short program except for the little mistake in the spin. It was not so much a technical mistake, but a control issue,” Tarasova explained.

“A week ago, we came back from Vancouver (Grand Prix Final) and there is a big time difference,” said Morozov, “but we feel good and it didn’t affect our training.” He added that he felt a bit hot and had a slightly elevated temperature before the program today, but still feels fine.

Zabiiako and Enbert’s performance to “Alexander Nevski” was highlighted by a level-four triple twist, triple toe and beautiful throw triple loop. The European bronze medalists got level fours for all elements except for the death spiral that was a level three and collected 78.53 points.

“We are very happy with the result and with our levels,” Enbert commented. “We got what we’ve worked on, only the death spiral was a level three.”

Zabiiako noted that they overcame the jetlag quite well as they are already are used to overseas travels.

While it was clear that Tarasova and Morozov and Zabiiako and Enbert are currently the top two teams in Russia, a whole group of promising young teams fight for third place and for a spot at Europeans and Worlds. Boikova and Kozlovskii came out on top in the short program with a clean performance to a jazz version of “Dark Eyes.” The team from St. Petersburg completed a triple Salchow, triple twist and throw triple Salchow to score 74.98 points.

“We are staying calm and we don’t let the result affect us,” Kozlovskii said. “The judges decide everything, our job is just to skate.”

“After the Grand Prix in France, we’ve worked on technical details and I even managed to change my skating boots, since the old ones broke down completely,” Boikova added.

ISU Junior Grand Prix Final Champions Anastasia Mishina and Alexander Galliamov placed fourth with a clean program on 72.85 points. They upgraded their junior program by replacing the double Axel with a triple Salchow and the throw triple Salchow with a throw triple flip.

2018 World Junior Champions Daria Pavliuchenko and Denis Khodykin delivered a strong performance as well to come in fifth with 71.56 points, and are closely followed by Alisa Efimova and Alexander Korovin (70.61 points).