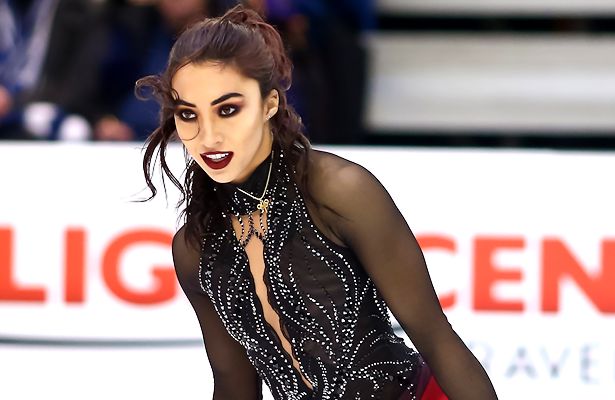 Any doubts about Gabrielle Daleman‘s capability going into the 2019 Canadian National Figure Skating Championships were quelled on Friday. After a disappointing sixth-place finish earlier this season at the 2018 U.S. International Figure Skating Classic, two-time and reigning Canadian women’s champion Gabrielle Daleman withdrew from the Grand Prix season due to a need to focus on her mental health and deal with the aftereffects of an initially-undiagnosed concussion.

The 20-year-old delivered a strong performance of her “Carmen” short program, leading off with her signature triple toe loop-triple toe loop combination, following up with a double Axel and triple Lutz. The skater showed strong level three footwork and was awarded a level 4 on all spins to finish first with a score of 70.18.

Daleman declined to speak to the media until after the event is concluded.

Overcoming the disappointments of the fall proved something of a theme at the event, as defending national bronze medalist Larkyn Austman entered the competition after having to withdraw from her scheduled Grand Prix event, the 2018 Skate Canada International, due to injuries to both of her ankles.

The 20-year-old from Coquitlam landed a triple loop-double toe combination, followed by a triple Salchow and double Axel. She received level 4 on all of her spin elements, as well as her step sequence, and earned 64.53 points for second place going into the free skate. Looking forward, she said she hoped to “just do what I do every day: skate a clean program and enjoy it.”

Véronik Mallet had a similar experience to Austman in the fall, withdrawing from Skate Canada International following issues with a right foot fracture that had kept her largely out of the previous two seasons of competitive skating. No such problems were in evidence in competition now. The skater executed her triple toe loop-double toe loop combination, triple loop and double Axel with aplomb, and received level 4 on all of her spin elements. She received a score of 60.55 points and is in third place going into the free skate.

Speaking afterward, Mallet said she had “a lot of fun” and was happy to be back at Canadian Nationals, her favorite competition. Having achieved her goal of getting back to nationals, she expressed the hope of going further, noting that she had never been to the World Championships before: “I’m hoping for that.”

In fourth place after the short, with a score of 60.10, is Alison Schumacher, competing at the senior level at nationals for the first time. The skater from Tecumseh landed a triple Salchow-triple toe loop combination, followed by a triple flip and a double Axel, and was awarded level 4 for all elements.

Schumacher commented that at the beginning of the season, her three junior-level events had been a “rough start,” but that she felt much better about her performance today: “Different, but a great experience.”

Alaine Chartrand, who finished fourth last year before having more promising results in her Grand Prix events in the fall, finished in fifth place (59.22) after an error on her triple Lutz attempt. She had previously performed a strong double Axel, and finished with a triple loop-double toe loop combination. The 22-year-old received a level 4 on two of her spins and step sequence elements.

“I think it will be easy for me tomorrow, because whenever I have a bad short, coming back in the long is my personality, kind of,” said Chartrand. “I’m better that way then maybe leading the short and having that pressure on me.”

Rounding out the final flight for tomorrow’s free skate is Aurora Cotop with a score of 58.98. The 16-year-old performed a clean short program with a triple toe loop-double toe loop combination, a triple Salchow, and a double Axel program.

Cotop, who finished fifth at this event last year, recently moved to Edmonton to train full-time with coach Ravi Walia. She revealed that the change in coaching arrangements had been complicated by a struggle with bone marrow edema, which has made performing her triple toe loop-triple toe loop combination difficult, and temporarily stopped her from including the triple Lutz in competition. The skater said she was “pretty happy with my performance overall” and that she enjoyed her new training environment.