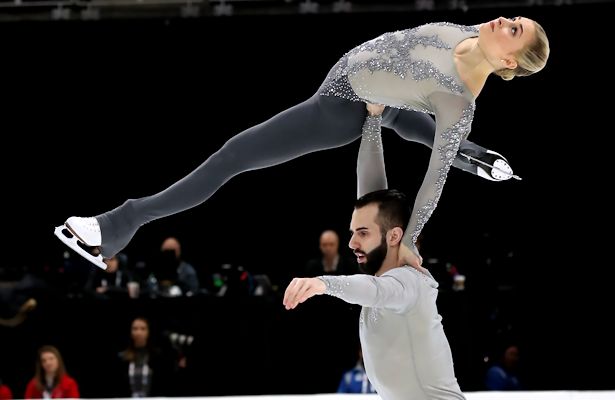 Cain and LeDuc gave a strong performance to music from the W.E. soundtrack, delivering a triple twist, throw triple flip and throw triple Salchow. The team also cleanly landed their  two side-by-side jumps: a triple loop and triple Salchow-double toe-double loop combo. Two of their lifts were graded a level 3, but the 2018 Four Continents silver medalists scored 141.89 for a first-place finish in the free skate and overall (212.36).

The victory was even sweeter as Cain suffered a concussion on the ice at Golden Spin in Croatia one month ago.

“I was in the hospital in Croatia staring at the ceiling thinking I need to remember this moment because a month from now, I want to be on top of the podium,” said Cain. “It shows that with hard work, you can get to this moment. My team never gave up on me, even when I was at my lowest of lows. I have been lucky, even with the concussion. I stayed pretty healthy throughout my career. I give credit to my team who helped me with that.”

Cain and LeDuc were fourth last year after winning the bronze medal in 2017 and will likely occupy the one U.S. pairs spot on the World Championships team.

“Everyone in the audience, as well as the judges,” said Cain, “they are all in this moment with us. They have all been through this with us, and it pushes us to want to strive to be better. I envisioned over and over the program, and I got to feel that moment today. We’re all at our strongest right now, and we all want to be the champions, but we all want to succeed and get the points for our country.”

“It was like building a castle, one brick at a time,” said LeDuc. “It’s been so inspiring for me to watch her push through this and give me strength. We are always trying to progress as a team, and this season, we took it very seriously and we wanted to step it up. We would love to be on the podium at Worlds, but our focus first and foremost is getting the spots back for our team.”

Denney and Frazier delivered a strong routine to music from selections from The Irrepressibles which featured a triple twist, throw triple loop, throw triple Salchow, and difficult level 4 lifts. Although mistakes were made on the side-by-side jumps, the 2017 U.S. national champions were otherwise solid and finished second in the free skate and overall (133.32/ 201.64).

“There were some things we left out on the table, and that’s what we are going to shoot for, to get better,” said Frazier.

Stellato-Dudek and Bartholomay received a standing ovation for their routine to selections from Whitney Houston. Their routine featured a level 4 triple twist, side-by-side triple Salchows and triple toe-double toes, and a level 4 lift. They finished third in the free skate and overall (131.74/199.92).

“We struggled a little bit earlier in the season,” said Bartholomay, “and we took things one thing at a time and are definitely improving. Today was definitely a fight, some things could have been worse than they were, but we are happy to be sitting up here. We all have our pressures with lifting and elements. Being so close after the short program put a lot of pressure on all of us (teams).”

Overnight leaders, Tarah Kayne and Danny O’Shea were devastated after a sub-par performance. The 2018 U.S. national silver medalists only earned a level one on their triple twist, and Kayne stumbled on the side-by-side triple Salchow combo. The team also had to abandon their final lift which received no points. They finished fourth in the free skate (126.81) and slipped to fourth overall (198.64).

“The program went how our year went, a lot of unplanned mishaps,” said Knierim. “A lot we had to change from the summer, and it’s hard to base everything on one event.”

Scimeca-Knierim mentioned that the team did not take a week off after the Olympics and Chris never was able to recover from a wrist injury. Now they can rest and prepare for next season.

The top three teams were named to compete at the Four Continents, while Cain and LeDuc earned the solo spot to the World Figure Skating Championships.