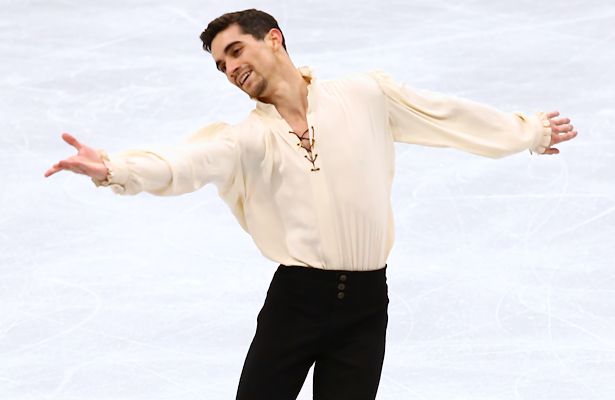 In what is to be his final competitive performance, Fernandez performed to “Man of La Mancha” choreographed by David Wilson. The 2018 Olympic bronze medalist landed a somewhat shaky quad toe-triple toe and later underrotated a triple flip, but was otherwise solid. He landed nailed a quad Salchow and two triple Axels, displaying good spins an footwork throughout. He finished first in the free skate (179.75) and rose from third to first overall (271.59).

“I feel amazing!” said the 27-year-old. “I knew that was going to be my last skate, although I don’t know about professional skating after this, but I’m super proud to have been able to skate like that today.”

“I hope people will think of me as a different type of skater, a more complete skater than the ones we are supposed to have,” he responded when asked how he want people to remember him. “Skaters are not just jumps, but they are about complete skating. There are some skaters I have seen, like this boy (Kevin Aymoz, FRA) who I see are like this and I am proud of them, it is unbelievable. I hope I have left something like that on figure skating.”

Performing to music from The Greatest Showman soundtrack, Samarin landed a quad Lutz, quad toe, and six triple jumps. His only major mistake was a two-footed triple loop and the 2019 Russian national bronze medalist was awarded a new season’s best of 177.87, a 17-point improvement from his previous score at 2018 Skate Canada.

“It is very hard to collect my emotions now and to tell how that was,” said the 20-year-old. “It was tough emotionally and mentally. Obviously, you want to be among the leaders and this is a big responsibility. I tolerated the physical pain until the end of my program.”

Rizzo performed to a Queen medley, opening with a strong quad toe. The 20-year-old went on to land eight more triples, however, nearly fell on a triple Axel. He earned level 4s on all spins and scored a new season’s best of 165.67 for a third-place finish in the free skate. With a total score of 247.08, he became the first Italian man to win a European medal in ten years (Samuel Contesti, silver in 2009).

“I feel really good,” said the 2018 World Junior bronze medalist. “It felt very emotional at the end. As I reached the end of the program I was really giving everything I had inside.”

Kevin Aymoz of France struggled on several jumps in his routine to “In this Shirt,” falling on his opening quad toe. Despite the mistakes, he managed to land five clean triples and earned a level 4 on two spins and footwork to finish fourth (158.32) in the free skate and overall (246.34). He was fifteenth in 2017.

“I am proud of myself, because I fought to the end even if it was difficult,” said the two-time French national champion. “I was more prepared for the short program than the free. The aim was to be in the last group for this competition, which I was, so I don’t regret anything. There were a few errors but it is all positive for the time being, even with the errors, it’s all good.”

“I fell on the Axel and it started to hurt,” he said of the pain in his left arm. “I don’t know what happened, but maybe it is broken. I broke my right arm about ten years ago when I slipped on the street after rain and it kind of feels the same.”

“No matter what happens, I wanted to skate the program to the end and show the maximum,” he continued. “I should have done the second quad toe instead of a triple.”

Italy’s Daniel Grassl and Michal Brezina of the Czech Republic both pulled up to sixth (236.70) and seventh place (234.25), respectively.

“It feels good to finally be finished!” said Grassl. “I was really excited for my first Europeans and I’ve really enjoyed it. Before the short, I was nervous, but today, I was a bit more tired after training yesterday. I had a problem with my back after the Junior Grand Prix and it has come back again so I need to get that looked at when I get home.”

Sweden’s Alexander Majorov finished in eighth overall, while Alexei Bychenko of Israel and Morisi Kvitelashvili of Georgia rounded out the top 10.

“I wasn’t at practice this morning. because we thought that might be better, but honestly that was a bad skate,” admitted the four-time Russian champion. “I wanted to do the most difficult version of the program. I didn’t want to make it easier.”