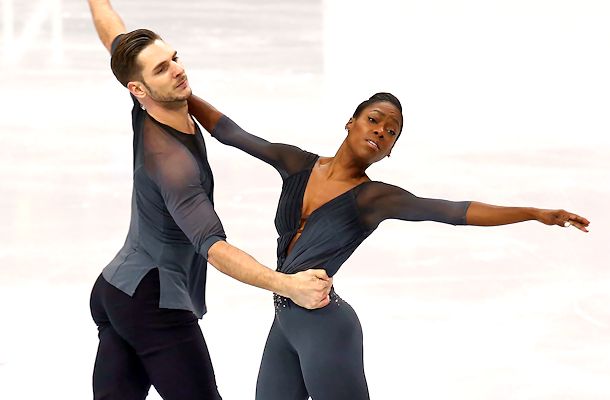 In their eighth appearance at the event, France’s Vanessa James and Morgan Cipres captured the Pairs’ gold at the 2019 European Figure Skating championships. Russia’s Evgenia Tarasova and Vladimir Morozov, the two-time and defending champions, took silver. Teammates Aleksandra Boikova and Dmitrii Kozlovskii edged out Italians Nicole Della Monica and Matteo Guarise for the bronze in their debut at this event.

Skating to “Wicked Game,” overnight leaders James and Cipres opened with side-by-side triple toe-double toe-double toes, however, James had a slight touch-down with her hand on the side-by-side triple Salchows. No matter, the 2018 World bronze medalists  pushed through, completing a throw triple flip and triple Salchow while displaying  level 4 lifts throughout their routine. The team finished first, earning a new season’s best of 149.11 to the delight of James, who screamed with happiness when the scores were revealed. They finished first overall with 225.66 points, improving their bronze-medal win from 2017.

They are the first French pairs’ team to win European gold since 1932 when the husband-and-wife team of Andrée Brunet and Pierre Brunet won in Paris, France.

“It is a dream come true,” said James of winning the gold. “We’ve dreamed of that forever. We’re so pleased to have skated like this for you (the audience)! I am so happy and proud, I can’t even find words to express how much.”

“We are indeed happy that we didn’t stop, but kept skating because we finally accomplished our dream after I don’t know how many years,” James added when asked about retiring.

“We sacrificed so much and did so many efforts,” said Cipres. “It was a dream when we were children to be here one day. It’s a moment of joy that I really want to share with the whole team, the federation, my family and my friends.”

Tarsova and Morozov appeared focused in their routine to “The Winter,” and the only error came when she underrotated and stepped out of the side-by-side triple toe-double toe-double toe combination. The two-time European champions were otherwise solid, landing solid side-by-side triple Salchows as well as a huge throw triple Salchow and throw triple loop. All twist and all lifts were graded a level 4 and they earned a season’s best of 144.92 for a second place finish in the free skate and overall (218.82).

“It’s hard to talk now and hard to draw any conclusions from that,” said Morozov. “We are obviously very disappointed by this defeat, by losing the gold medal. Like yesterday, the whole skate was good except one jump element [the combination]. Without that, all the rest was good. We gave it away ourselves today.”

Boikova and Kozlovskii, who were fourth after the short program, surprised with their routine to The Nutcracker. They landed clean side-by-side triple Salchows, a triple twist, throw triple Salchow, and throw triple loop. However, Kozlovskii struggled on the side-by-side triple toe-double toe-double toe combination. The 2018 Internationaux de France bronze medalists finished third in the free skate and overall with a season’s best of (132.70/205.28).

“We always try to support each other,” said Boikova on dealing with the mistake in the combination  jump. “Everyone has their challenges, and you have to survive them together; then forget them and move on.”

“It’s a miracle,” said Kozlovskii when learning of their bronze-medal win. “Fate has forgiven me today. It gave me a scare and then it has saved me. It is truly a miracle.”

“It’s no secret I made a mistake,” he said of the mistake on the combination jump. “People will have noticed of course, and I don’t know why I did it. It was unexpected and inexplicable, but we will learn a lesson from it and move on. I would like to say that my partner is amazing. She skated the program perfectly today and so overall, we can be happy.”

Della Monica and Guarise finished just off the podium by .14 point. Third after the short program, the Italian champions landed solid side-by-side triple Salchows and a level 3 triple twist, but Della Monica two-footed the landing of a throw triple loop. The team also struggled with the side-by-side triple toe-double toes when she put a hand down on the first jump, but they rallied back to land a throw triple Salchow, showing strong level 4 lifts throughout. They scored 131.44 for a fourth-place finish in the free skate and slipped to fourth overall (205.14) in their seventh appearance at this event.

“I think we had pressure, but you always have pressure,” Della Monica said. “We were sure we could skate a good program. Yeah, it was not perfect, but we skated a good program. I think the best so far anyway because we finished every jump. We were a bit nervous today, but I think we handled it very well.”

“It was a big fight I think,” said Guarise. “Today was not so easy, but we made it through to the end and I think we did pretty well. I’m a little bit disappointed actually, because we gave everything we had. It maybe wasn’t 100 percent, but I think it was very good.”

Guarise admitted that the throws and toeloop were a “fight” and could have been better. “A few elements I think we lost a tenth of a point, but in this case, 14 tenths is the difference. Even like 20 tenths is a lot.”

“I want to say a big thank you to everyone for the support,” said Pavliuchenko. “Not everything worked out, unfortunately. I wasn’t confident, especially in the second part of the program. I relaxed a bit mentally and the second half of the program came out not so well. I’ll calm down and will analyze what kind of mistakes I made.”

“This is a very valuable experience,” said Khodykin. “We were able to compete at many international events, like the Grand Prix Final and European Championships. I think we did well for this being our debut and coming from juniors. We got that chance. Obviously, you can’t get rid of nerves, therefore you need to learn not to try to get away from it, but to skate with it.”

“We were very concentrated today and tried to keep our focus until the end and it all worked out as we wanted,” said Hase. “It was our first clean free skate in competition this season. We got very good marks in the free and overall, so we reached all our goals for today.”

“Our goal was for sure to make another step forward on the international scene,” added Seegert. “Even though the field was smaller here, there were still many strong couples.”

“There are going to be many other strong pairs from China or Canada,” he said when asked about their goal for Worlds in March. “So, it’s going to be difficult to be in the top 10 there as well. But our goal is definitely to qualify for the free skate.”

Austrians Miriam Ziegler and Severin Kiefer who stood in seventh after the short program, withdrew from the free skate citing emotion distress. The team is mourning the death of their coach, Jean François Ballester, who unexpectedly passed away last month.

Ziegler and Kiefer was clearly emotional after their short program, later citing, “After attempting to get through practice this morning we’ve decided not to compete in tonight’s free program. We were very well prepared and felt strong enough to compete in Minsk. In the competitive environment at yesterday’s short program, which is emotionally stressful at times, we realized how little we have processed the loss of our coach and friend Jeff. The fact that he should have been here with us and we associate the competitive environment so closely with him made it particularly hard to deal with.”