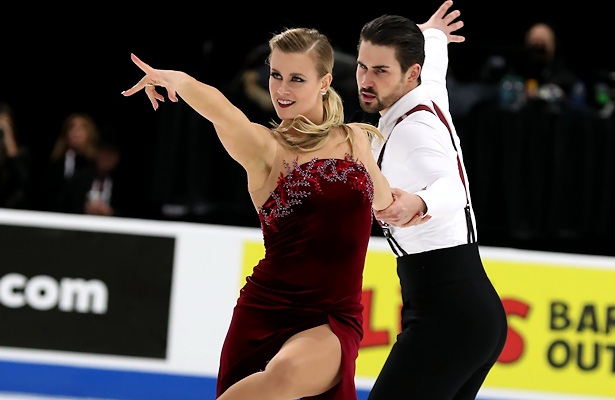 Defending champions Madison Hubbell and Zachary Donohue are currently if first place after the Rhythm Dance at the 2019 Geico U.S. National Figure Skating Championships. Madison Chock and Evan Bates are close behind in second, followed by Kaitlin Hawayek and Jean-Luc Baker.

Hubbell and Donohue looked quite at home in their sultry tango to “Alevare” and “Tangata del Alba.” Their stellar performance featured strong level 4 twizzles, as well as a level 4 curve lift and midline steps. All elements earned high grades of execution (GOE), and the 2018-19 Grand Prix Final champions scored 84.56 points for first place.

“It was great to be here in this beautiful arena,” said Hubbell, who with partner, is undefeated in all international events this season. “We were here in the spring for Stars on Ice, so we had a taste of what it would be like.”

All three teams in podium position train together with Patrice Lauzon and Marie-France Dubreuil in Montreal.

“The coaches are good at adapting each other’s strengths,” said Hubbell. “It allows us to support each other while still wanting to be the winner at the end of the day. We are who we are sitting here today because of a lifetime of experiences. Those experiences helped shape our partnership.”

Hubbell and Donohue, placed fourth in the Olympics and second at Worlds last year.

“We’re pretty lucky to be training with the best in the world,” said Donohue. “It’s such a unique experience. We all love each other, and we all push each other and want to beat each other.”

Chock and Bates took command of the ice, earning a level 4 on every element, while showing effortless transitions and good speed in their routine to “Assassin’s Tango.” The two-time two-time World medalists also met all eight of their key points, placing second with 82.33 points.

“We are so happy to be back in Detroit,” said Chock, the 2018 national bronze medalist, who is from Novi, Mich. “It wasn’t too long ago we moved from here to Montreal. It’s nice to share all of these big moments.”

Chock and Bates began full training this week for the first time in eight months, following the ankle surgery she underwent in April. Bates mentioned that Chock had been bothered by her ankle since August 2017, a span that encompassed the Olympics where they finished ninth.

“I feel like so much has happened in the past 10 months,” Chock added. “I was very fortunate to have such a smooth recovery. We wanted to take our time and feel the best I could possibly feel before I came out. Every time you compete, you learn more things about yourself and your programs. I am so happy to be doing what I love, and I am the happiest I have ever been. It’s just going to get better. We’re so excited about our skating, and we wanted to show that.”

Bates, who is from Ann Arbor, Mich., added that training with Hubbell and Donohue on the Olympic team in PyeongChang in private made him and Chock want to raise their game and sparked an interest to relocate to Montreal.

“Back stage, we were less relaxed,” Bates said about returning to Michigan, “and once we got out on the ice, that helped. We did exactly what we wanted to do.”

Hawayek and Baker produced solid level 4 twizzles right out the gate in their Tango to “A los Amigo” and “Vuelo al Sur.” The 2018 NHK Trophy champions showed good energy throughout, earning a level 4 on their curve lift and first pattern, and currently sit in third with 76.77 points.

“We all used to train here in Detroit,” said Hawayek. “It’s nostalgic to see so many familiar faces in the audience and that made it comfortable.”

Christina Carreira and Anthony Ponomarenko, who are making their debut on the senior level, produced a fiery and strong Tango, meeting all key points and earning a level 4 on every single element. The two-time World Junior medalists had the third highest technical score the group and finished a close fourth with 75.23 points.

Ponomarenko mentioned that the team is growing both physically and emotionally from the jump from juniors to seniors.

Close on their heels are Lorraine McNamara and Quinn Carpenter (74.42) and Rachel Parsons and Michael Parsons (72.52).

“We are very lucky to learn a lot from it,” said McNamara of competing with the older skaters. “We look up to a lot of those skaters, and it’s so much fun to be on the same ice as them.”

The Parsons and Parsons were third in the NHK Trophy and fifth at U.S. Nationals in 2018.