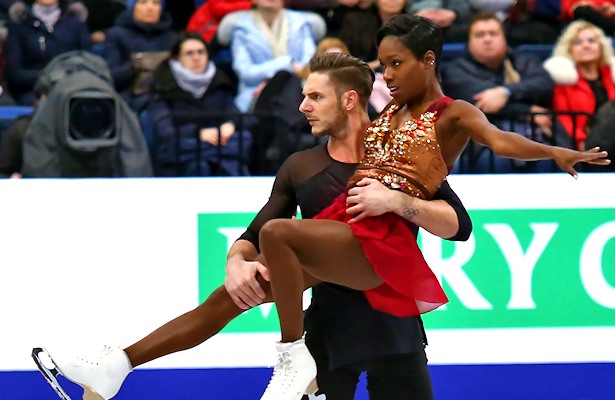 Vanessa James and Morgan Cipres of France took the lead after the Pairs’ Short Program at the 2019 European Figure Skating Championships on Thursday night. Russia’s Evgenia Tarasova and Vladimir Morozov are in second with Italy’s Nicole Della Monica and Matteo Guarise close behind.

James and Cipres appeared tentative, yet controlled in their routine to “Uninvited,” which was choreographed by Guillaume Cizeron. The 2018-19 Grand Prix (GP) Final champions had a slight “bump” on the landing of their level 3 triple twist, but otherwise showed solid side-by-side triple toes and a throw triple flip along with a level 4 lift. The spins and footwork were graded a level 3 and they scored a new season’s best of 76.55.

“It’s very promising going into worlds, because we lost a lot of levels,” said James. “We had level threes in everything and it should be a level four. It’s a season’s best and we’re very happy. I think it comes with experience. We are a team that’s been skating for eight years now. I think with a little bit of mileage and more experience getting a few medals has helped. I think any team needs time and experience knowing how to compete. We look different. We’re not the regular pair team.”

“We are happy with what we did today and we’re confident about tomorrow,” added Cipres. “We are used to skating in every position. To be honest, skating first in the short program (in the group) is kind of great. We don’t mind to skate first or last. In the long program, skating last is harder, but we are going to do what we have to do.”

“I think we work a lot,” he continued. “We work together a lot and our team, not only our coaches, but also our federation, everybody is taking care of us. Last month, we won the Grand Prix Final which was amazing. We have to remind ourselves that it’s just the beginning for us. It was our first Grand Prix Final, so we were really happy to be there and winning with a big fight in the long program was amazing, but now it’s done. We keep that in our mind, but we are thinking about worlds.”

Skating to last season’s “Piano Concerto No. 2” by Sergei Rachmaninoff, Tarasova and Morozov were solid except for an underrotation on the side-by-side triple toes. The two-time and defending champions showed a good throw triple loop and and level 4 triple twist, spins and footwork to earn 73.90 points.

“My mistake (on the triple toeloop) wasn’t anything to do with our preparation,” said Tarasova. “Our training was good and we wanted to skate well and clean, but I made this mistake. It was a bad mistake, and after that, we couldn’t really show the full set of emotions that we would have felt with a clean skate.”

Morozov agreed. “Overall, it wasn’t a bad skate,” he said. “The other elements, like the steps and lift, were ‘OK.’ Without the mistake, it would have been fine. It just didn’t come out as we wanted today.”

“Our coach wanted to change it,” said Morozov regarding the program change. We had some time after nationals, so we were able to go back to the old program. I wouldn’t say he insisted on it but he convinced us…OK, maybe he insisted!”

“We felt the program was more powerful to skate,” added Tarasova. “We really liked it more compared to the one from the start of this season, so that’s why we made the choice.”

Della Monica and Guarise had the second highest total element score of the group in their routine to “Never Tear Us Apart.” The skaters, who won silver at both GP events Helsinki and Moscow, delivered clean side-by-side triple Salcows, a level 3 triple twist, throw triple loop and earned a level 4 on their back-outside death spiral, lift, and straight-line footwork. They scored a new season’s best of 73.70.

“We did what we usually do in the public,” said Della Monica. “We just kept practicing like jumps and other stuff. For instance, during the last competition, I just repeated the jumps over and over for them to get stuck in my head. The secret for harmony in our couple is not to give up and every time to take what is good and learn from your mistakes. “What makes you go every time higher and higher. Today is very good, but there are still so many things to work on for our next competition.”

“Expectations were very hard,” added Guarise. “You definitely should take care of details and keep working at them, keep pushing and pushing and pushing. The shape and the good program will undoubtedly come. The top is very hard to achieve, so you shouldn’t just sit and do nothing. You stand up and keep going. From Nicole, I learned patience and how not to be very pushy.”

The 2019 Russian bronze medalists were very proud of their performance.

“It’s the first time we have got over 70 for a short program together at an international competition,” said Kozlovskii. “We justified all our work and preparation and we showed all the emotions necessary in that program. Now we just need to stay calm for tomorrow, because the free program is much harder, especially psychologically, so we need to be ready.”

“The atmosphere was amazing today,” he added. “We felt like we were skating at home with all the Russian flags in the tribunes.”

“Tomorrow, we will get to show our free program, the Nutcracker,” noted Boikova. “It’s a lovely classical program and we will hope to show our best skating with it.”

Teammates Daria Pavliuchenko and Denis Khodykin, who are also making their debut at Europeans, finished in fifth place with 65.89 points after their routine to “When Winter Comes.” Pavliuchenko put a hand down on the throw triple flip, but the 2018 World Junior champions otherwise put out solid side-by-side triple toes, and a level 3 triple twist.

The skaters, which placed third at both GP events in Helsinki and Moscow, were overall satisfied with their performance.

“There were some nervous moments during the training process when we felt quite reserved and cool on the ice,” admitted Khodykin. “However, the nervousness during the training came out during the performance. Taking part in the Grand Prix Final helped us a lot to get mentally prepared for this competition. Now, we didn’t do our best, but I’m sure we will improve after getting well-experienced.”

Pavliuchenko agreed, adding that their nervousness was probably due to their debut at this event. “We seemed to fail to keep up with the training pace and rhythm,” she explained. “I didn’t do some technical aspects of the performance quite correctly. We’ll work to achieve more.”