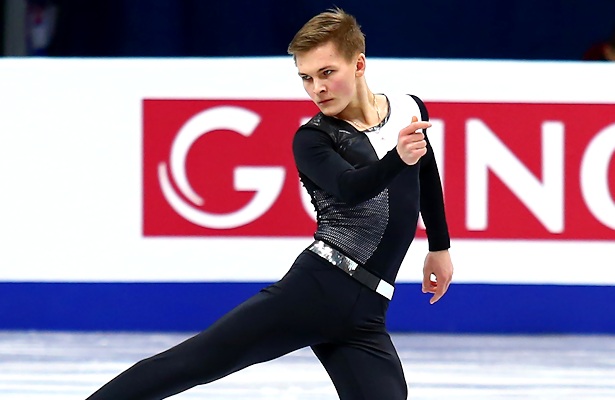 Russia’s Mikhail Kolyada took the lead in the Men’s event after the Short Program at the 2019 European Figure Skating Championships on Thursday in Minsk, Belarus. Teammate Alexander Samarin is currently in second, followed closely by Javier Fernandez of Spain.

Skating to music by Muse, Kolyada put out a solid routine which featured a quad toe-triple toe, triple Lutz, and triple Axel. All spins and footwork were graded level 4 with high grades of execution (GOE) and the 2018 World bronze medalist  finished in first place with a season’s best of 100.49.

“It is important now not to let out the emotions,” said Kolyada. “I need to keep them for the free. It was a good performance, not without small mistakes, though. It is definitely easier to skate when you’re healthy. At this point, I am pleased with what I’ve done today. The difference is that I am healthy now.”

Earlier this season, two-time European bronze medalist was plagued with severe sinus problems and had to undergo endoscopic sinus surgery in order to compete at Russian Nationals.

“The support is great and it is great to see a full rink on a week day afternoon said the 23-year-old.

Teammate Samarin two-footed a triple flip in his routine to “Cold Blood” by Dave Not Dave, but otherwise landed a solid quad Lutz-triple toe and triple Axel. The 2019 Russian national bronze medalist received level 4s for all spins and a level 2 on his straight-line footwork to earn a new season’s best of 91.97 for second place.

“I’m quite satisfied, but I wanted to show more,” said the 2018 Internationaux de France bronze medalist. “It seems today is not the right day. I didn’t plan to perform the quad flip, but after the holidays, I rested and gained enough energy. When training, everything went okay. I have a very strange feeling trying and mixing something new (flip).”

In his tango-themed routine to “Malagueña,” Fernandez landed a quad toe-double toe, but underrotated a quad Salchow and had a step out on the triple Axel. The 2018 Olympic bronze medalist scored level 4s on spins and earned the highest Program Component Score (46.64) of the group. He sits in a close third with 91.84 points.

“I think the program was great!” said the six-time consecutive and defending European champion. “The jumps were good even though the judges didn’t think so. I trained for three weeks hard in Toronto. The first week was a little hard.”

“I wanted to do the Europeans as my last competition,” said the 27-year-old who will be retiring after this event. “I didn’t want that pressure at the Olympics. The Europeans is more my house. It’s time for the next step in my life. Twenty-one years (of skating) 13 European Championships, six titles. In the free, nine points is nothing. I want to show I can do more than 91 points.”

Kevin Aymoz of France placed fourth after his routine to “Horns” by Bryce Fox which featured a quad toe, triple Lutz-triple toe and level 4 spins and footwork. The only error was a turn out on the triple Axel and the 21-year-old was awarded a new season’s best of 88.02.

“I am really pleased my skate,” said the French national champion. “I fought until the very end. This definitely takes some pressure away from me now. I did feel a little nervous before the program, but once my music started, I was in my element and it all got easier. The audience really pushed me also.”

“In the free Skate, I want to skate clean, just like today,” he added. “I’ll do one quad. Maybe I’ll do two of them later this season.”

Russia’s Maxim Kovtun, currently fifth, underrotated and fell on his opening quad Salchow, but then rallied back to land a quad toe-triple toe and triple Axel. The two-time European silver medalist earned a new season’s best of 87.70 for his routine to “L-O-V-E” and “Sing, Sing, Sing.”

“It was nerve-wracking,” said the four-time Russian champion. “It has been a long time since I felt these kind of emotions at such a high-level competition. I have been preparing very hard, very focused and I wanted to show my very best, which unfortunately didn’t work out.”

“The judges didn’t get the best impression of my program,” continued the 23-year-old. “After the fall, I went into battle mode, and it is a plus that I didn’t let go the rest of the program. I gritted my teeth for the remaining elements.”

“Tomorrow we have a day off and I think I will be more confident for the free skating,” concluded Kovtun. “I will try hard in the free skating to put out everything I have. Everything is still possible.”

Daniel Samohin of Israel, touched down with a hand on quad toe (in combination with a triple toe) and turned out the landing of a quad Salchow, but landed a triple Axel and earned a level 4 on his final combination spin. He sits in sixth place with a new season’s best of 86.48 points.

The 2018 World Junior Champion had two versions planned for his program content—one harder and one easier.

“I was happy to do a triple-triple at the end, but if I could do the quad-triple (toe), then I was going to try a quad Salchow,” said the 20-year-old. “In the warm-up, I wasn’t feeling my quads, but after I landed the toe, even though I put my hand down, I thought I would do the Salchow. It was definitely better than last year for sure. I’m maturing as I’m competing and that’s helping me a lot. I don’t let things get in my head and I just go for it.”

Israel’s Alexei Bychenko earned a new season’s best of 84.19 for seventh place, and is followed by Michal Brezina of the Czech Republic (83.66).

“Overall, I am happy,” said Bychenko. “I’m a little sad about the small mistake on the triple Axel, but besides this, it was a really good program. It could have been much worse, thank God it wasn’t! I felt a bit of pressure because I was thinking so much about a clean program.”

“It was fun,” said Brezina. “I was a little bit careful because it was the first time on this ice. I missed the practices that were on the main arena. I should have pushed all the way just like I did at the beginning of the program. The (quad) Salchow was pretty good and I think I relaxed a little bit. I made the big jump, then I relax a bit. Not so good.”