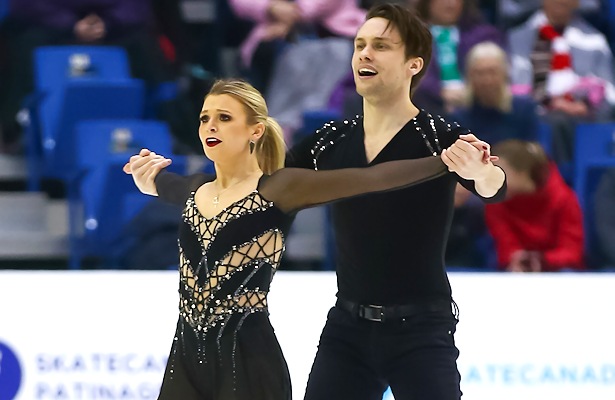 In 2011, Kirsten Moore-Towers stood atop the national pairs podium with then-partner Dylan Moscovitch. Eight years later, she and Michael Marinaro stepped atop it, having won a decisive victory at the 2019 Canadian Tire National Figure Skating Championships.

Already the winners of the short program, Moore-Towers and Marinaro‘s Pink Floyd medley free skate featured solid efforts on all elements, other than very slight negative GoE on their three-jump combination after a planned double toe loop was popped to a single. This minor loss of points did nothing to stop them, and they received 131.28 points for the free skate, and 202.75 overall. The throw jumps and side-by-side jump elements were landed, and all lifts went smoothly. And, true to Marinaro’s promise after the short program error, the free skate concluded with a strong death spiral, graded as level 4 by the judges.

Despite their win, the duo was not fully satisfied with their performance.

“A little bit harder out there than we had anticipated,” said Marinaro. “We had been training much easier than that.” He went on to describe it as being “labored right through the starting pose to the ending pose.”

Despite her long history in the sport, Moore-Towers noted that many of the pressures they faced in this competition were new.

“We’re veterans, but we’ve never done a lot of the things we did this week,” she said. “We’ve never skated last, we’ve never been the ‘favorites’, and we’ve never won the short program.”

Another factor in their stress going into the skate was the strong performance that immediately preceded them, as silver medalists Evelyn Walsh and Trennt Michaud skated superbly. Marinaro remarked that “it (the challenge) was fun. Evelyn and Trennt laying it down before us put some pressure on.”

“I would not say it was fun,” was Moore-Towers’ rejoinder. “Looking back, it’s really great for Canada, but in the moment it’s a lot of pressure. They skated great and we saw the whole thing.”

Walsh and Michaud’s own performance of their “Romeo and Juliet” free skate was their best of the season so far, earning them 124.67 points, for 189.87 points overall. Their only negative GoE came on the triple twist (graded as level 2) and an underrotation on their second side-by-side jump element, the triple Salchow. They achieved level 4 on all three of their lifts, as well as on their combination spin. Their death spiral was graded as level 3.

“We were so happy with our fifth place last year and we wouldn’t expect to be second this year,” said Michaud on how markedly their situation had changed in the span of a season.

The first full senior season had a rocky beginning at the Nebelhorn Trophy and Skate America Grand Prix.

“We do truly believe everything happens for a reason,” said Walsh, “and I don’t think we would be at this point. We would have worked so hard…if we didn’t have those other competitions.”

The result was all the more impressive given that she was afflicted with stomach flu a week beforehand, delaying preparations.

In third place overall with 166.84 points were Camille Ruest and Drew Wolfe, who finished fourth in the free skate with a score of 104.38. Ruest and Wolfe’s performance was, in her words, “bittersweet” with negative GoE on their triple twist, both side-by-side jumps, their throw triple loop, and their closing lift. They took four fall deductions across the program, two of those on the lift, a particularly harrowing moment caused by Wolfe’s blades clicking together.

“We’re still learning, and this is a new type of competition for us where we’re in this position,” said Wolfe. “It’s gonna be an experience to take forward.” Ruest agreed, adding that they could do better.

In fourth place with 163.28 points were Lori-Ann Matte and Thierry Ferland, who won the junior pairs event the previous year in Vancouver. Justine Brasseur and Mark Bardei placed third in the free skate (105.28 points), remaining in fifth overall with 162.26 points, while Mariah McCaw and Steve Adcock, who finished four in the junior pairs event in Vancouver, finished in sixth place in Saint John with 150.18 points.

Skate Canada is sending the top three teams to the upcoming Four Continents, while the top two earned a spot at the World Figure Skating Championships.