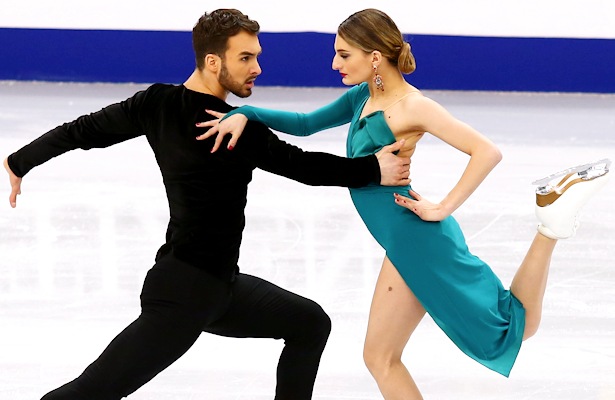 Gabriella Papadakis and Guillaume Cizeron of France took the lead the Rhythm Dance at the 2019 European Figure Skating Championships on Friday. Alexandra Stepanova and Ivan Bukin of Russia and Italy’s Charlene Guignard and Marco Fabbri are currently second and third, respectively.

Papadakis and Cizeron topped their personal best from Internationaux de France earlier this fall with a score of 84.79, breaking their own record for the highest score in the Rhythm Dance. However, his twizzles were only graded a level 3 and the team received a level 2 on the midline steps—leaving points on the table. The 2018 Olympic silver medalists otherwise showed a level 4 curve lift and and all elements were awarded high grades of execution (GOE) in their tango routine.

“It all went really well,” said Papadakis. “We are proud indeed of what we have done. Technique-wise, it was on point as well.”

“We were really concentrated on all the technical elements that we’ve been working on,” Cizeron added. “Indeed, it’s only the second competition of our season. For me, it didn’t feel like it was the best performance that we could show, but it’s interesting to know that even if we’re not at one hundred percent, we can still deliver.”

“We are really happy to have achieved what we achieved and to be in first place,” said Papadakis. “But even if it might seem easy from the outside, for us it’s not and we always fight. It (being the favorites) indeed adds pressure.”

Stepanova and Bukin earned level 4s on the twizzles, gaining a higher base value, along with level 3 midline steps that received high GOEs. Like the French, the 2018 European bronze medalists met seven of the eight key points in their pattern and also earned a level 4 on the curve lift. They were awarded a season’s best of 81.37 for second place.

“The assessment of our coaches is incredibly nice and it means a lot to us,” said Stepanova. “We loved the crowd that supported us so much from the beginning to the end. Ice dance is to us when you show your emotions, your theatre, your show and the technical part at the same time. This is what is our sport is about. We’re very happy to have surpassed the 80 points, especially at such a competition as the European Championships.”

“When you go out on to the ice, you’re a bit nervous anyway, but when the crowd starts to cheer, to support, then all your fear goes away and you’re feeling this energy,” said Bukin. “This is amazing, great. Everything comes with time, with experience when you start to understand how and what to show and do it the best way. The most important thing is not to overdo it. You need to do like in training, that is what you’ve been doing a million times. You don’t have to do more at the competition.”

Guignard and Fabbri, who were fifth last year, also earned a new season’s best of 79.05, a slight improvement from the 2018-19 Grand Prix Final where they finished third. The Italian national champions both earned a level 4 on their twizzles, met seven of the eight key points, and their level 4 straight-line lift and level 3 diagonal steps were awarded high GOEs.

“We didn’t think about it,” said Guignard when asked about hearing the scores of Stepanova and Bukin before they took the ice. “It changes every competition. Sometimes the couple before us had a high score, but maybe after we have a higher score. We don’t think about it. We just think about our performance.”

“I think we skated our best performance,” said Fabbri. “Scores don’t always well the truth. Sometimes you feel you skated better, but you get less. Sometimes you feel you didn’t skate that well and you get more points. This time we felt we skated our best. The best rhythm dance of the season and the best score so it’s great. We really felt comfortable, even if there was a little bit of pressure because we are in the medals.”

The bronze they one at the Grand Prix Final helped with their confidence.

Natalia Kaliszek and Maksim Spodiriev of Poland are currently in fourth with a new season’s best of 72.87. The 2018 Golden Spin of Zagreb silver medalists met all eight of their key points, and were the only team of the 25 to receive a level 4 on both patterns. Their twizzles and lift were also graded a level 4.

“I think it was quite good and we are really happy,” Kaliszek said of their performance. “I think it was a good place where we were, in the last group.”

“We worked on the clean elements and the second thing, to make it look easy, which is the most important thing in Ice Dance,” Spodyriev added. “And I hope it was good. We’ll look at more details after.”

Russia’s Victoria Sinitsina and Nikita Katsalapov found themselves in fifth place (70.24) after they had an uncharacteristic fall on the twizzles. He he lost his balance and she had to put a hand down to prevent a fall, resulting in two deductions. The 2018-19 Grand Prix Final silver medalists quickly recovered to meet all eight key points and earned a level 4 on their rotational lift and level 3 on the midline steps.

“We were well prepared and fully under control and together, but there was just this embarrassing and frustrating mistake,” said Sinitsina. “We had to switch our thoughts off and just keep going. Tomorrow is a new day and we will do everything we can then.”

“It wasn’t a technical mistake,” added Katsalapov. “I went in to the twizzles perfectly and confidently, I controlled the entry and rotation, but I just came down. I don’t know exactly what happened. I can’t excuse it or justify it. Maybe I hit a tracing in the ice, I’m not sure. I think we missed eight counts or so afterwards. I can only apologize for my mistake and thank the crowd. If they hadn’t supported us so well, I don’t think I could have come back from it. I’m so disappointed.”

Olivia Smart and Adria Diaz of Spain are currently in sixth (70.02).

“We felt really trained together,” said Smart. “We worked really hard the past three weeks since the holidays, after nationals. We felt really connected, really together. We did our job. We really enjoyed it. My thought halfway through the performance was, ‘Oh my lord, I’m at Europeans! Oh, I’m here! Get back into it.'”

When asked about the spot for Worlds, Diaz responded that the European results are part of it. “The federation will look at all the results of the season, who has the best chances for the best result at Worlds. It will be a decision of a lot of factors.”