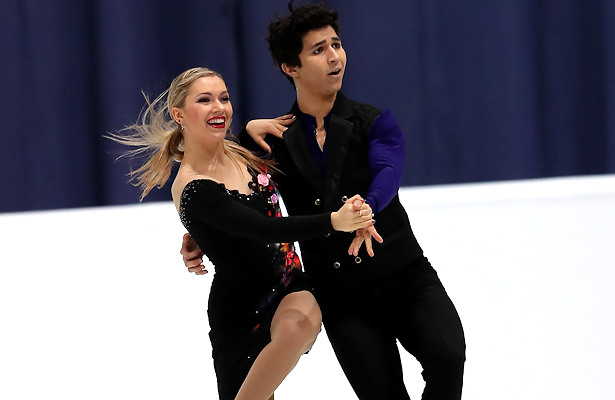 Marjorie Lajoie and Zachary Lagha of Canada took the lead in after the Rhythm Dance at the 2019 World Figure Skating Championships on Thursday. Russian’s Elizaveta Khudaiberdieva and Nikita Nazarov, Sofia Shevchenko and Igor Eremenko, and Arina Ushakova and Maxim Nekrasov are in second through fourth, respectively.

Lajoie and Lagha showed strong edges and flow in their quality tango to music by Otros Aires. Both ice dancers earned a level 4 on their twizzles as well as the first tango pattern and rotational lift. The three-time Canadian national junior champions also met six of their total key points and received a season’s best of 70.14.

“We feel pretty good and happy with how we skated,” said Lajoie. “For sure it is a stressful competition and we need to deal with the stress and I think we did that well today.”

Lagha agreed adding, “We came ready and I think we are able to do everything what we usually do in practice. And as I always say, as long as our coaches are happy,I am happy!”

After the Junior Grand Prix Final, the team worked mostly on the technical part of their routine as that is what they identified having the most trouble with.

“We have worked on the qualities that will make us a good senior team because junior and senior is very different,” said Lagha. “Not everybody who is good in juniors is good in seniors. It will be an important step.”

Khudaiberdieva and Nazarov were confident in their strong performance to “Tango Amore” by Edvin Marton displaying deep edges throughout. The 2018-19 Junior Grand Prix bronze medalists met six of the key points and earned a level 4 on their twizzles and lift as well, however, the midline steps were graded a level 2. The were awarded a season’s best of SB 68.69 for second place.

“We wanted to do the most powerful skate,” said Khudaiberdieva. “We worked on our technique, tried to work the tango to the fullest, make twizzles closer. We didn’t want to just skate clean, we wanted to make it memorable, the most emotional. To make the audience and coaches, parents, everyone who works with us and roots for us happy.”

“We came here with completely new feelings and don’t know anything,” said Nazarov. “There is a pressure cause it’s the final start and we have to show our maximum. There will be no such opportunity again.”

“We are just very happy to be here,” said Khudaiberdieva of their debut at this event. “Now to have won the small silver medal is very honorable for us and we are very pleased with our performance today. It is a good way to end this season’s Rhythm Dance. It was the best performance of our Rhythm Dance. We did our job, we improved our technical part, and the most important for us, the spectators have enjoyed our performance.”

“We have worked a lot on our technique, on the key points of the tango pattern dance and also on adding power and ice coverage,” said Nazarov.

Khudaiberdieva said they spent time on also skating in a “grown up” way in official practices and competitions. “It is very important to skate clean and with confidence,” she said. “It was very prestigious for Team Russia to have all three couples on the podium in the Grand Prix Final, so we as a team will try to repeat this here and wish good luck to everyone.”

The Russian national junior bronze medalists will be moving up to the senior level next season.

Shevchenko and Eremenko are third with 67.56 points, just a few tenths of a point below their season’s best in Vancouver. The 2018-19 Junior Grand Prix Final champions showed showed good edges and flow in their quality tango to “La Cumparsita,” which featured solid level 4 twizzles and a straightline lift. They met five of the key points, but their circular steps were graded a level 2.

“We are very happy to be here,” said Shevchenko. “This is a big and important competition for all junior skaters around the world. It’ s important for us, too. Our Rhythm Dance was really emotional and I will miss this dance – Tango. I like it a lot.”

“I would like to add that every couple had really high level, there was really beautiful skating, we loved everybody,” she added.

“It was our last Tango this season and we tried to do our best,” said Eremenko. “We’re happy to skate next to these guys in the junior season and we’re proud for our coaches.”

The Russian national junior champions will also be moving up to seniors after competing for five years at the junior level.

Ushakova and Nekrasov showed good detail in their transitions in their tango and flamenco routine, however, the 2018-19 Junior Grand Prix Final silver medalists only met two of their key points and their diagonal steps received a level 2. The twizzles were a level 4, as was the rotational lift, and they scored 65.96 for fourth place.

USA’s Avonley Nguyen and Vadym Kolesnik showed good speed across the ice as well as deep edges in their routine to “Vuelvo al Sur” and “Building the Bullet.” The 2018-19 Junior Grand Prix finalists showed a level 4 curve lift and twizzles and finished fifth with 65.18 points.

“We’re focusing more on the emotion and the passionate side of the dance,” said Nguyen. “We’ve had a lot of changes to this program and we hope the judges liked it. Of course it can always be better, but it was the best we could’ve done today.””

“It was our last rhythm dance this season and we just wanted to enjoy it and show everybody how good we can be,” added Kolesnik.

Teammates Caroline Green and Gordon Green had a slip during the second pattern which resulted in a base value score as well as negative grades of execution (GOE). They sit in eighth with 58.82.