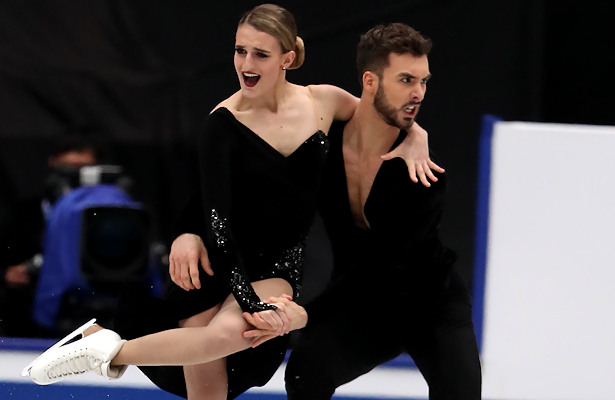 Olympic silver medalists Gabriella Papadakis and Guillaume Cizeron of France took the lead after the Rhythm Dance at the 2019 World Figure Skating Championships with a record-breaking score. Russia’s Victoria Sinitsina and Nikita Katsalapov are currently in second, followed by teammates Alexandra Stepanova and Ivan Bukin.

It was a stellar competition in which all teams performed well and were in top form. Many, including the top 10 teams, earned a new season’s best as well as improving on levels and key points in the Tango Romantica patterns. Grades of Execution (GOE) and Program Component Scores (PCS) were the determining the factor for the placements.

Papadakis and Cizeron topped their season’s best again with a record score of 88.42 after their innovated and superb Tango to “Oblivion” and “Primavera Porteno.” The defending champions showed keep knees and good connection, earning many high grades of execution (GOE) in all elements which inlcuded level 4 twizzles, curve lift, and midline steps. The team also met all eight of their key points in both of their level 4 Tango Romantica patterns.

“We were happy with the way we skated today,” said Cizeron. “I think it has definitely been our best performance in rhythm dance this season. It is our sixth World Championships together in senior skating. We are having a great time today on the ice. The audience was amazing. They were really supportive and we have had a lot of fun.”

“We love this program, we love the choreography, we love working on it,” said Papadakis. “There is a mandatory rhythm every year and it works for us every time more or less. Sometimes we have difficulty finding something that suits us perfectly. This time, the Tango theme was right up our alley, that is a theme that we love.”

The 2019 European Champions competed at the 2014 World Figure Skating Championships in the same arena where they finished 13th.

“I mostly remember the venue, the rink and the hotel,” recalled Cizeron. “I do not remember much what I had been thinking at the time. It is funny to look back five years ago and see how much progress we have made.”

The rest of the top 10 teams also earned a season’s best.

Sinitsina and Katsalapov redeemed themselves after a disappointing Rhythm Dance at 2019 Europeans where they ultimately finished fourth. In Saitama, the 2018-19 Grand Prix Final silver medalists gave an excellent Tango, displaying great speed and showing more control, earning high GOEs on all elements. They too, met all eight key points in their patterns, however, Katsalapov only received a level 3 on his twizzles—all other elements were graded a level 4. The Russian champions earned 83.94 for their performance to “Verano Porteno.”

“We are very happy with our performance today,” said Katsalapov. “We are grateful for the audience. We saw a lot of Russian flags, and we feel that their support helps us to skate. Hopefully, we gave all of our energy to them. We will just stay focused and keep calm, and do our best for tomorrow’s free program.”

“This is the World Championships, and everyone trained hard for this competition,” said Sinitsina. “It is one of the last events this season, and we have been running through our programs for a long time now. We wanted to show our best, and the crowd helped us a lot.”

Stepanova and Bukin finished a close third with a 83.10 points. The 2019 European silver medalists put out an interesting Paso Doble and Tango with a Flamenco flair, showing good interaction with audience while earning a level 4 on all elements and meeting all key points.

“We have made an attempt to fix the mistakes that we have made at the Russian Nationals and the European Championships,” said Bukin. “We wanted to skate heartily and enjoy our performance. This time, I felt less pressure than at the European Championships. I still was nervous, but the nervousness is for good. An athlete should be nervous before competitions. But when I start skating, I forgot all the anxious feelings and just enjoyed the performance.”

“In the beginning of the season, the Rhythm Dance was our weak point,” noted Stepanova. “We know that the key to success is hard work, so we did our best to increase our skills in expression and speed. We have accomplished our task for today. The coaches were pleased with our performance. Now we have to focus on the free program and switch to it.”

USA’s Madison Hubbell and Zachary Donohue are just a mere .01 point behind in fourth with 83.09 points. The defending silver medalists were also solid, showing good speed and attack in in their traditional Tango to “Alevare” and “Tangata del Alba.” They also earned a level 4 on all elements and met all eight key points in their patterns.

“We were very pleased today to give out a strong performance,” said Hubbell. “We got all level four which was our goal and it’s a great start towards the whole competition.”

Kaitlyn Weaver and Andrew Poje of Canada met all key points and were also awarded a level 4 in all elements. The defending bronze medalists sit in fifth with 82.84 points after their Milonga-style Tango to “Libertango” in which they displayed good lines and extension.

“A season’s best was definitely the goal,” said Weaver. “This season has been unconventional for us for sure, so we tried to simulate (competition) as much as we could, just at a very relaxed show atmosphere, which I think is what we did. We’ve been better since Four Continents. We knew that we skated with not as much courage as we would like at Four Continents. Today we felt like we were in the zone.”

“It was good,” added Poje. “We practiced and really worked on the tiny issues of the program and tried to bring that passion and connection to the program. When they announced our names, I was thinking about Saitama in 2014 (World Championships), just remembering those memories there and they are good memories. The last time we did a Tango in this building was then. It felt good to come back and do this program that we love we really tried to embrace the audience.”

USA’s Madison Chock and Evan Bates were also solid, meeting all key points and earning a level 4 on all elements. The 2019 Four Continents champions sit in sixth with 82.32 points after their entertaining story-telling Flamenco and Tango to “Dinner” and “Assassin’s Tango.”

“I can’t tell you how many times I told myself today to have fun in the middle of the performance,” said Bates. “Anytime I feel that my mind starts to wonder, especially at a big event like this, I tell myself to have fun. It just seems to go away and then all the technical stuff seems to take care of itself, so that is sort of our mantra right now, to have fun, enjoy this and today we had a lot of fun.”

“It is definitely great to have that Four Continents (title) under our belt,” said Chock. “Coming to the World Championships, we wanted to reset and we have made some changes to our programs, so we had a lot to focus on in that aspect when we were training. We feel refreshed and new and different, so for us, we were really excited to come here and show them. It just felt great to perform out there with the audience here today, there were so many people and the arena is huge, so it was great.”

Italians Charlene Guignard and Marco Fabbri continue to show improvement in their Tango, earning level 4 on all elements and meeting all key points in their patterns. The 2019 European bronze medalists are in seventh (81.66).

“As this is probably last Rhythm Dance (in this season), we are very happy, and got our season’s best today,” noted Fabbri. “This means we skated very well. Our main focus is to skate our best. I mean, we don’t like starting our competition with the result in mind, we just want to skate our best performance and just have fun, and make the audience fun. I think we succeeded today.”

“The Japanese audience is fantastic and amazing!” said Guignard. “The arena is so big and it is impressive to have with full of audience. We get power from the audience, and we are honored to skate here.”

“We have been together and dating since 2009, and this helps us a lot show our emotions on ice,” Fabbri added. “We trust each other and feel the connection.”

Piper Gilles and Paul Poirier of Canada earned a level 4 on all elements except for the circular steps (level 3) and also met all key points in the patterns for an eighth-place finish of 80.44 points.

“The changes we made to our rhythm dance payed off,” said Gilles. “We were above nines (in the components) and our component scores was just something we were pushing for this season. Since we we’re struggling with levels all seasons, finishing it off strong at the World championships is a compliment for us.”

“I think we were both a little bit nervous today, because this is a program that has been harder for us this season compared to the free,” added Poirier. “We focused our training the last month on really perfecting it and making it stronger. There were few little shaky moments between the two of us (tangled feet), the thing that happens in Tango, but I think we trained enough and got the score we were looking for.”

USA’s Kaitlin Hawayek and Jean-Luc Baker and Laurence Fournier Beaudry and Nikolaj Sørensen of Canada round out the top ten.

“I think it was a really good performance for us,” said Hawayek. “This program has come to be a special program to us. It was a new style that we have never done before and we really enjoyed the challenge of the new style. Our goal is to continue and push ourselves upward to the people that are ahead of us, gain momentum on them, and just show everyone that we are just as of quality and ability to be up with the best as well.”

“It is so much fun to perform in Japan,” added Baker. “I really love coming here. I think it is our fifth time now. We had a lot of fun here and we are really excited for tomorrow. Tomorrow we will show a lot of freedom. We really want to tell our story with our free dance.”

Fournier Beaudry and Sorensen had a small costume mishap.

“The short dance started very good, and then there was this little strap coming off,” said Fournier Beaudry. “We just kept it in, and I think that is the reason we could dance well.”

“I am not actually sure what has happened to my costume,” said Sorensen. “I think I kicked my boot on the swing, and the bottom is completely detached. It created a little bit more suspense that we wanted, but I think it was one of those little things that take you out of the moment for a little bit, but you still stay focused pressing for what you have to do.”

While Papadakis and Cizeron lead the pack with nearly a five-point lead, there is little separating the rest which will make for an exciting Free Dance on Saturday.