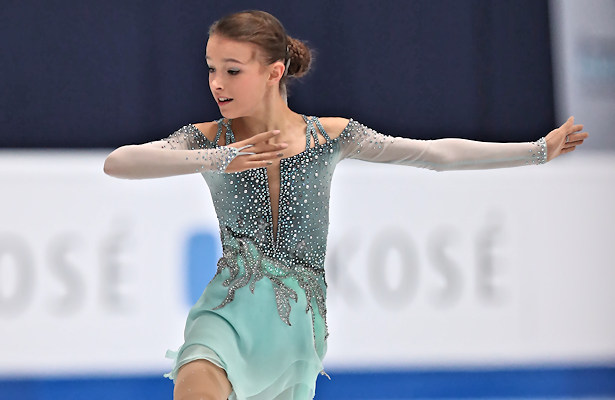 Anna Shcherbakova of Russia took a narrow lead in the Ladies’ Short Program at the 2019 World Figure Skating Championships on Friday. Training mate Alexandra Trusova is close behind in second, followed by USA’s Ting Cui.

Alena Kostornaia of Russia announced her withdraw due to “medical reasons” on March 4, 2019.

Shcherbakova put out a lyrical routine to “A Comme Amour,” which featured a solid double Axel, triple flip and triple Lutz-triple toe. The Junior Grand Prix finalist earned a level 4 on on all elements except the footwork, and was awarded 72.86 points for first place in her debut at this event.

The 14-year-old from Moscow is now focused on giving a clean performance for the free skate. “I have been training hard and now it is the time to show it.”

“On the one hand, it is a little bit harder because I have won before so I do feel some pressure and I want to do better than I did before,” she said of coming in as the defending champion. “On the other hand, it is easier because I have been here before and know what to expect.”

Trusova brought her dog “Tina” to the event. “She is helping me a lot when I have her with me. She brings a lot of warmth and comfort to the hotel room.”

The 14-year-old is keeping it “secret” on the number of quads she has planned for the free skate.

Skating to Rhapsody on a Theme of Paganini, Cui produced a solid double Axel, triple Lutz-triple toe and triple flip. The 2018 Tallinn Trophy silver medalist earned a level 4 on all elements except for the change combination spin to receive a score of 67.69.

“I am happy with what I did today, because even though things were not perfect, I am happy I fought on each jump and tried really hard to land it,” said the 2018 Tallinn Trophy silver medalist who was seventh last year. “I am really excited about my placement going into the long. It is the first time for me that I am in the top three, so the goal is to stay focused and to try my best.”

While she doesn’t have any quads in her repertoire, the 16-year-old from Colorado Springs, Colo., hopes to a do clean free skate.

“I think it is really exciting that ladies do quads and I think it is really cool that we are getting close to the men,” Cui commented. “Ultimately my goal is to land a quad too, so that is just a work in progress. My personal goal is to skate well and do programs I am proud of. I wasn’t really thinking on where I would end up, but it is exciting to get a small medal. I hope to stay here for the long.”

USA’s Hanna Harrell improved her season’s best by over 10 points with a score of 62.68 for fifth place after her energetic routine which featured a triple Lutz-triple toe, double Axel, and triple flip. The 2018 Egna Spring Trophy junior silver also earned a level 4 on her footwork and flying camel spin.

Yuna Shiraiwa of Japan delivered an upbeat routine to “Nightmare” by Mizter Koffy and “All Aboard” by Club Des Belgas, landing a triple Lutz-triple toe and double Axel, but her triple flip was under-rotated and received an edge call. The 2019 Bavarian Open junior champion is currently in sixth with 62.08 points.

“My flip was downgraded, but I felt like it was okay, so I don’t care too much,” said the 2018 Asian Open silver medalist. “I competed as a senior previously. As a senior I want to express my passion and show a senior level performance. Hopefully I can go up to the podium tomorrow.”

Anna Kuzmenko of France landed a triple Lutz-triple toe, double Axel, and triple flip and earned a level 4 on all spins in her debut at this event. The Moscow-born skater, who started representing France last season, is in eighth place with a new season’s best of 59.20 points.