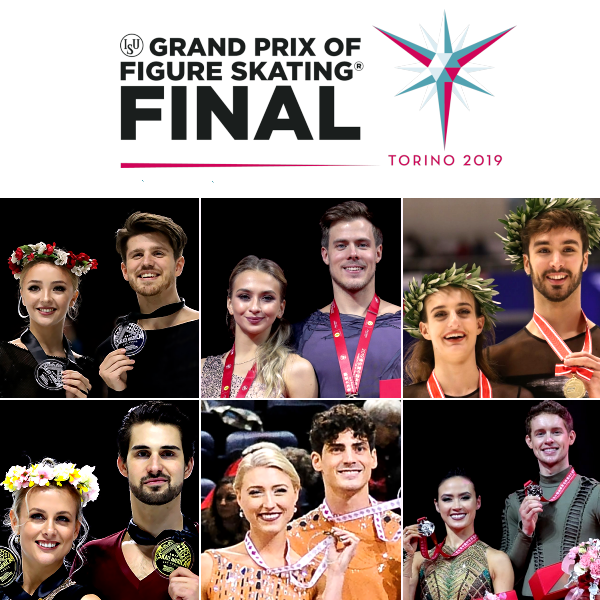 Close battle ahead between top teams

All six teams in the Ice Dance event have competed before in the ISU Grand Prix of Figure Skating Final, but only three were there last year. Madison Hubbell/Zachary Donohue (USA) are the defending champions while Victoria Sinitsina/Nikita Katsalapov (RUS) are the reigning silver medalists. Alexandra Stepanova/Ivan Bukin (RUS) finished fourth a year ago. With Gabriella Papadakis/Guillaume Cizeron (FRA), Madison Chock/Evan Bates (USA) and Piper Gilles/Paul Poirier (CAN) back this year, the Final should be an exciting and close battle for the medals as all six teams are podium material.

No doubt, the four-time World Champions are the hot gold medal favorites in Torino, Italy. The French champions proved their superiority once more by setting new record scores in the Grand Prix series. Papadakis and Cizeron continue to push the limits and their Free Dance is very avant-garde. In the Rhythm Dance, the five-time European champions show a very different side of themselves, upbeat and fun. They missed the Final last year as they withdrew from their second Grand Prix event due to Cizeron suffering from back pain.

The U.S. champions have established themselves as a top team and qualified for their fifth consecutive Grand Prix Final—more than any of the other ice dance teams heading to Torino. However, the competitors are catching up and the 2019 World bronze medalists need to be on the watch and have no room for error.

The 2019 European silver medalists celebrated a break-through in the past season by making the Final and finishing just off the podium at Worlds. They started a bit later into this season as Stepanova had injury problems, but they looked ready at the NHK Trophy and want to attack in Torino.

The Russian champions proved in the Grand Prix that their World silver medal last March was not a fluke. They gave consistent performances. Their Rhythm Dance is delightful, and in the Free Dance, they stay true to their classical style. Sinitsina and Katsalapov are targeting the top of the podium, but it won’t be easy.

Piper Gilles and Paul Poirier (CAN)

The 2019 Four Continents bronze medalists return to the Final after a five-years hiatus. They qualified once before in fall 2014, however, since then, the Canadian silver medalists have gone through many ups and downs and have faced tough challenges. With a Skate Canada win under their belt and a silver from Moscow, the team now seems to be on their way up again.

The 2019 Four Continents champions sat out the Grand Prix last season as she was recovering from ankle surgery, but then the team came back very strong. Back on the Grand Prix, they especially drew attention with their innovative Free Dance.