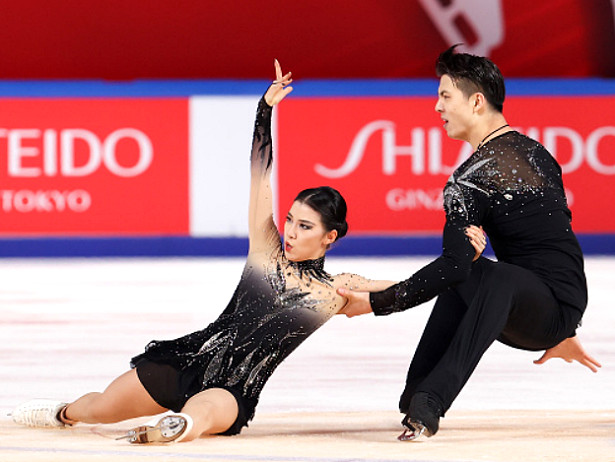 Shiyue Wang and Xinyu Liu perform their free dance at 2020 Cup of China in Chongqing, China.

Shiyue Wang and Xinyu Liu maintained their overnight lead to win the gold in Ice Dance after the Free Dance took place on Saturday at 2020 Shiseido Cup of China. The silver and bronze went to teammates Hong Chen/Zhuoming Sun and Wanqi Ning/Chao Wang, respectively.

In their sixth appearance at this event, Wang and Liu delivered a dramatic routine to selections from Black Swan which featured level 4 twizzles, combination spin, and lifts – all of which received many high grades of execution (GOE). The diagonal steps and one-foot steps were graded a level 3, and while the 2019 Finlandia silver medalists took a one-point deduction on a costume failure, they still earned a decent score of  122.61 in the free dance and overall 206.84.

“We are pretty happy with today’s performance,” Wang said. “Because of Liu Xinyu’s hand injury, we had a rushed preparation, but we did what we were able to do in practice. After he fully recovers, we hope to polish the program. Compared to last year’s Cup of China, I feel we have matured and have become more experienced.”

Chen and Sun earned 115.69 points for second place in the Free Dance after their performance to “I Will Wait for You.” The two-time national silver medalists earned many positive GOEs for all elements, including level 4 twizzles, lifts, and the opening combination spin. Their total score of 192.26 was a whopping 30-point improvement from their last Cup of China event, and they pocketed their first Grand Prix medal.

“For today, we were able to perform like we do in training,” Sun said. “We used the same music (for the Free Dance like last year), but we made a new program via online classes with our overseas coaches. For the future, we hope to bring more emotions into the program.”

In their Grand Prix debut, Ning and Wang took the bronze after scoring 102.83 points in the Free Dance and 171.90 overall. Their modern routine to selections from Mozart, l’opéra rock featured level 4 lifts and combination spin. Her twizzles were graded a level 3 while his a 4, and the diagonal steps were a level 3.

“It was good and we feel we have made progress compared to last year,” Wang said. “We hope to learn from this competition and we will focus on the levels in the elements that we did not get here to achieve them next time.”