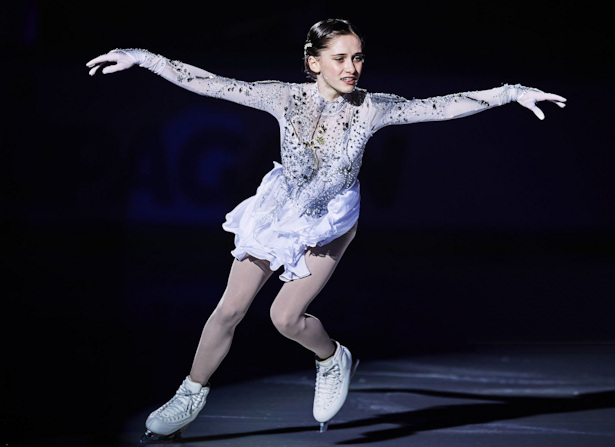 With World bronze medalist Alysa Liu retiring at age 16 from competitive skating, the hopes for the future of the American women rest mainly on newly-minted World Junior Champion, Isabeau Levito. The 15-year-old became the first American female skater to win the World Junior title since Rachael Flatt in 2008.

In Tallinn, Levito put out two excellent performances and edged South Korea’s Jia Shin for gold by half a point. “My hope was that I would skate clean and that I would land the elements that I recently put into my program, my loop combos. I was excited to do them for the first time internationally,” the 2021 U.S. Junior Champion said.

With no Russian skaters allowed to compete, the student of Julia Kuznetsova, two-time Olympic Ice Dance Champion Evgeni Platov, Slava Kuznetsov and Otar Japaridze, as well as Zhanna Palagina, was suddenly the top favorite for the title and she was able to deal with this pressure very well.

“I learned a long time ago by experience that I really need to not think about that because then it puts more pressure on yourself,” she observed. “You need to just take everything one step at a time, one element at a time, one second at a time, and it makes it much easier.”

The skater got the right advice from Kuznetsova, who had traveled with her to Estonia.

“She mainly told me just to focus on myself and to focus on my program and to skate clean like I always do in practice and attack everything 100%,” said Levito.

Levito’s programs to The Swan by Camille Saint-Saens and to Tchaikovski’s “Russian Dance” from Swan Lake had a balletic style, which was actually something new for Levito. In the past, she was known for doing “hard” or “sassy” Spanish-themed programs.

“That’s like one of my personalities, so it suited me very well. But this year was like a new thing. It was a different thing for me. And I loved it, of course, too. When I was younger, I wouldn’t have liked this music as much. I would have pretended that I was falling asleep to them or something. As a child, I would always hear this music and start imitating someone snoring. But this year (season), when we selected this music, I was very excited for it,” the teenager shared, laughing.

Levito has now embraced the new style, working with ballet coach Zhanna Palagina, as well as Otar Japaridze and Evgeni Platov to “make it look good on ice.”

The skater’s first memory on the ice was not noticing others around her. She just enjoyed gliding around . Her mother took her ice skating after they watched the 2010 Olympic Winter Games and little Isabeau started to imitate Johnny Weir’s moves.

“I remember doing a spiral and thinking about being in a jungle or something like that,” Levito recalled.

“I’ve been with her since she was little, for the first time on the ice,” Kuznetsova said. “She was very little. She always wanted to skate, always wanted go with the speed, never look around. But she was enjoying every moment, she loved what she was doing.”

When Levito was about eight, the coaches realized that they had a special talent at their rink.

“By that time, she started to land the double Axel,” said Kuznetsova . “For little kids, this is big, especially when we in the United States don’t have a group system like we do in Russia. When was eight years old, she did the double Axel, all double-doubles, started to compete very strong, was not afraid, and had very good performances since she was very young. That’s when I understood perhaps we have to keep an eye on this one.”

One of the thing that attracted Levito to figure skating was it’s versatility.

This goes very well with the fun, upbeat and open-minded personality of the young skater that has many different interests.

“When you first meet me, I am likely going to be shy for the first maybe ten minutes, and then I’m going to start being crazy,” Levito said. “I think I like to overshare sometimes because I want to break the ice.”

Off ice, Levito is interested in different languages and cultures. She enjoyed traveling abroad and seeing other countries such as France, Austria and Estonia this past season. She speaks Italian as her mother is originally from Italy and taught her to speak the language. The teenager tries to pick up other languages, too, such as Russian and Korean.

“I kind of hope five years from now that I know a little bit of every language,’ she said. “I feel like it would be so useful to know at least like 10% of a language, of every single one.”

“One of my goals in life is to hug Evgenia,” she shared. “I love her so much! I grew up watching her. I didn’t watch every single skater, so the skater that I did give 100% all my attention and that I was devoted to was Evgenia Medvedeva. I absolutely loved her and adored her.”

Little Isabeau admired Medvedeva for her artistic expression and for pushing the limits at the time by starting to put triple-triple combinations in the second half of her program and adding difficult transitions.

“Then I love Elizaveta Tuktamysheva,” she added. “She’s an Empress! I bow to her! The next one is Kaori Sakamoto, because to me, she’s like this gladiator. She is strong. She’s fierce. She’s powerful. I love her face before she competes, especially at Worlds, before her long program. You could see in her face she was just going to win. She was going to skate clean and she was going to devour the competition.”

Depending on the decisions of the ISU Congress later this year, Levito, who turned 15 in March, can move up to the senior level or has to stay junior if the age limits are raised. The skater probably would move up to the senior level internationally as she has already competed in seniors at Nationals where she won bronze. However, she’s not concerned if it’s found that she has to stay at the junior level and stated she would be “happy either way” and “just go with the flow.”

“I don’t really think about the level I am competing at,” said Levito. “I focus more on my training and my elements and my presentation, and overall, just skating my best.”

Nevertheless, Levito is hoping for a long career. In fact, many are. With her quick success on the scene, she is being touted as America’s new hope for the women’s discipline.

“Your mom said (stay for) three Olympics,” Kuznetsova interjected. That drew a surprised look from her student. “That’s a long time!” responded Levito, who is definitely eyeing the 2026 Olympic Winter Games.