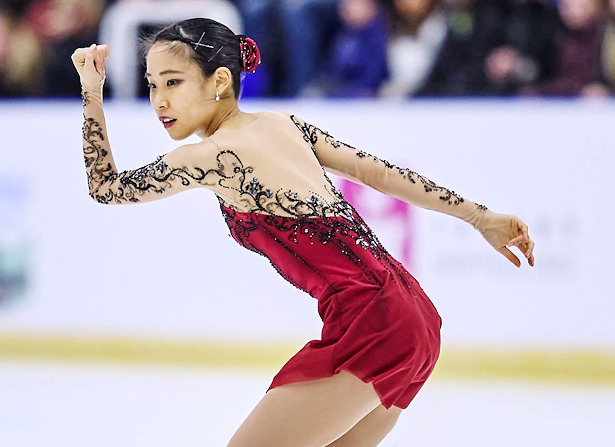 Mihara gave a very good performance with her her routine to “El Amor Brujo,” landing a triple Lutz-triple toe and three other clean triple jumps. The only mistakes were a slightly underrotated triple flip (edge call) as well as the back-end of a double Axel-triple toe. The two-time Four Continents Champion racked up many high grades of execution for her level-four spins and footwork, and finished first in the free skate with 145.20 points. The overnight leader (72.23) scored a total of 217.43 to maintain first overall.

The 23-year-old said she has been fourth so many times, but that her coach told her during practice that a medal was possible and even aim for the top level.

“I couldn’t believe it, but I so happy that I’m hear now!” said Mihara. “Receiving a gold medal today might be the biggest result, the biggest achievement of my life. I still cannot believe it!”

It was noted that Mihara didn’t get a bonus for her triple Lutz-triple toe in her short program.

“The reason was because the very fast music, the piano part, actually didn’t come in…it was a technical problem I think,” she explained. “There was like one or two seconds before I started. I had to start because I was confused. I was thinking, ‘what shall I do,’ but I just started my performance. That is the reason that my combination jump was slightly early than (after) one minute and 20 seconds. Those things happen and it was one of those days, so I just put it aside and at the next competition will be more careful.”

🥇#MaiMihara 🇯🇵 #三原舞依 217.43: “I am really, really happy because I finished forth so many times and now I am first and I am just so, so happy!”#MKJohnWilsonTrophy #GPFigure pic.twitter.com/Wc1ITlGmG7

Levito hung on to her opening triple Lutz-triple loop, but later received an edge call on both triple flip jumps. She was otherwise solid, landing another three clean triple jumps while showing strong level-four spins and footwork throughout her routine to “Dulsea Si Tandra Mea Fiara.” The 2022 World Junior Champion, who stood in second (72.06) after the short, finished second in the free skate and overall with a two new personal best scores (143.68/215.74).

With two silver medals, it’s most likely the 15-year-old will qualify for the Grand Prix Final, but will have to wait for the other skaters to compete in the next two individual events in Japan and Finland.

“That was my goal,” said the 15-year-old, who names Evgenia Medvedeva and Elizaveta Tuktamysheva as her biggest idols. “I was slightly disappointed as I have yet to see how my first jump went, but I know that it didn’t feel perfect and I know I can do my triple Lutz-triple loop good. I got a little upset about that. But it’s ok, I love the rest of the program and I feel like I did really good the rest of program.”

“I’m slowly working my way up to performing overall the way I want to as a whole,” Levito added. “I feel like today was just another level up.”

🥈#IsabeauLevito 🇺🇸 215.74: “I am very happy to make it to the final. That was my goal for the GP series. I still have to check on my first jumping pass 3Lz3Lo, it didn’t feel 💯 and I want it to be perfect.” #MKJohnWilsonTrophy #GPFigure pic.twitter.com/Eyy6LJHzVb

Gubanova, who stood in third after the short (66.82), finished fifth (126.29) in the free skate. Her routine to “Latika’s Theme” featured five clean triple jumps, including a triple Lutz-triple toe. Her only mistakes were a slightly underrotated triple loop and triple flip (in combination with a double toe-double toe). The 2022 Finlandia Trophy bronze medalist was able to maintain third overall with a total score of 193.11 points to win the bronze in her Grand Prix debut. In doing so, she became the first Georgian woman to win an International Skating Union (ISU) medal.

“I’m very pleased with my performance today and very happy to be here and glad I could do my job,” said the 19-year-old. “I’m happy that my work has paid off!”

Gubanova chalked up her success to gaining a lot of experience during the second half of last season where she competed Europeans (7th), Olympics (11th) and Worlds (6th).

“That was good, because here was my first senior Grand Prix,” she noted. “I can basically say it was quite calm.”

#AnastasiiaGubanova 🇬🇪 193.11: “This is a dream come true to leave my first GP I never would have believed this would be possible two years ago. I want to thank my Federation and everyone who supported me because without them it wouldn’t have been possible.”#MKJohnWilsonTrophy pic.twitter.com/WltCfFt0fi

Young You of South Korea rose from sixth (61.21) to fourth overall (191.36) after finishing third (130.15) in the free skate. The 2020 Four Continents silver medalist put a foot down on the landing of a slightly underrotated a triple flip, but was otherwise solid, landing a total of six triple jumps in her program to The Four Seasons.

The 18-year-old said she was sick ahead of the competition with a high fever and had considered withdrawing. While she feels better, she wasn’t “fully recovered,” and said she was just going to take it easy and not focus on the result. Nevertheless, she earned a new season’s best in both the free skate and total score at this event.

#YoungYou 🇰🇷 #유영 191.36: “This season it was very hard to come back to the ice as I had a rough time during the Olympics. My father passed away during the Olympics that also prevented me from praticipating in the Gala.” ⬇️⬇️#MKJohnWilsonTrophy #GPFigure pic.twitter.com/R9Mfu5yCLK

Poland’s Ekaterina Kurakova struggled on her two opening jumping passes, slightly underrotating both in her skate to music from the Up soundtrack. The 2022 Lombarida Trophy bronze medalist recovered to land four clean triple jumps and displayed level-four spins throughout to finish fourth (126.98) in the free skate. Her total score was a new season’s best of 190.44 points for fifth place overall.

“I was so happy when I head the loud cheers for #YoungYou 🇰🇷 #유영 and I was so happy that she had a good skate but it also meant that I would have to skate well and I am so glad I did!” She has her next competiton already next week at Warsaw Cup! #EkaterinaKurakova 🇵🇱 pic.twitter.com/7AKXMAGiBs

Levito added 13 points to her Grand Prix standings for a total of 26. You now has 20 points.

Mihara picked up 15 points and will compete next in Espoo, Finland, along with Gubanova (11).