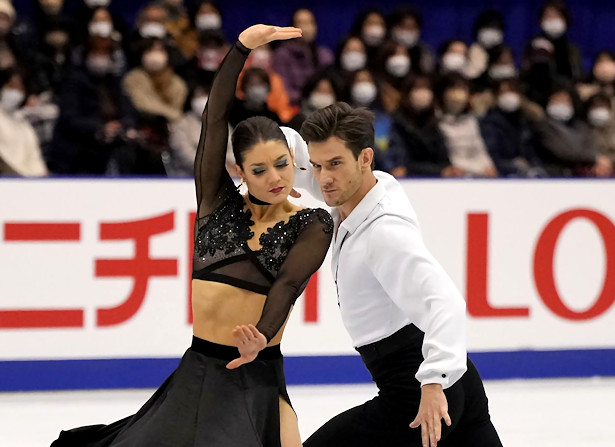 Fournier Beadury and Soerensen were first (85.66) going into the Free Dance

The 2022 Grand Prix de France silver medalists delivered an ardent routine to music by by Ennio Morricone which featured creative lifts and difficult footwork. The team picked up a level four for the twizzles, lifts and dance spin, while the midline step sequence garnered a level three. The only mistake was a one-point deduction for an extended lift, and they also earned the highest component scores. The Canadians earned finished first in the free dance and overall with new personal scores (124.75/210.41).

This was a poignant moment for the team who has been competing on the Grand Prix circuit for seven years.

“It is a dream come true and something we have worked for for a very long time,” Fournier Beaudry said.

“There are a lot of emotions and a lot of thoughts,” added Soerensen. “We were just extremely proud of being able to deliver these two performances that brought us to the top of the podium today. Thinking back, it’s been a long journey and I wish that I just could tell everybody that starts somewhere that you can make it anywhere you want to go if you commit properly. Thinking back and getting to where we are right now is just amazing.”

“We had a couple of great days of training back at home where we did the necessary work in order to perform here today,” he said. “We are just so happy with the way we skated. The crowd was really with us the entire time and made the experience so much more enjoyable.”

When asked how they set themselves apart from other ice dancers, Soerensen said: “I think Laurence and I just try to stay authentic to ourselves. We really love the connection that we have on the ice together. We live together, we work together, we train together,  and do everything together. I think it’s something that we like to bring to our performances, our strong connection and relationship. That’s really what it’s all about. To stay true to ourselves.”

🥇#FournierBeaudrySoerensen 🇨🇦 210.41:
Nik: “There is a lot of emotions and thoughts but were were just extemeley proud of what we accomplished today. Thinking back it’s been a long journey and I wish I could tell everyone you can probably get everywhere you wanna go.” pic.twitter.com/DZGo5DIOxq

Like the Canadians, the American team earned many positive grades of execution (GOE) for all elements. The lifts were all graded a level four, but she received a level three on the twizzles. The diagonal steps were a level three, while the dance spin received a level four. The two-time Four Continents Champions placed second in the free dance and overall (124.13/209.13)—just 1.28 points shy of the top spot.

“We are incredibly proud of what we’ve accomplished in the last two weeks since Skate America,” Chock said. “We’ve made some big renovations on both programs and we are very pleased with how we were able to perform this week. We know it’s just the beginning of the season and we are looking forward to elevate both programs.”

“We’ve done some evolving of our concept and our character since Skate America,” she added. “It’s about the relationship of the spirit of fire and spirit of air and how one cannot survive without each other. They have the ability to rebuild, devour and produce life to each other and things around them. We wanted to express that relationship. It’s something we have connected with and are excited to keep exploring.”

The US Champions are very much aware of the expectations

“I think we set high goals for ourselves this season and with this comes some pressure that we put on ourselves,” said Bates. “Additionally, there is some pressure from outsiders, who might look at past results as an indicator of what could potentially happen in the future. But I think following that could be a trap. We discussed what the season will look like for ourselves and I think each season always offers new adversity and new obstacles. And this season is no different.”

“Our goal remains the same: we want to win Worlds this year,” he added. “The best way for us to achieve that goal is to look on ourselves and develop ourselves and our skating. To stay true to our strength and our faith in each other and our coaching staff. It’s never a linear path straight to the top, especially when the world champions from previous seasons are no longer competing. This season is just a new territory for everyone. Competition will be fierce and we just have to be the best.”

Madison feels that what sets them apart from others is that they believe in their unique and genuine friendship.

“Our birthdays are one week apart, that’s really funny,” she said. “What sets our skating apart I think is our determination. Our ability to overcome adversity throughout our career and keep evolving. I think that’s our main drive in our skating, to push ourselves and evolve and create something new and different for us. Hopefully it’s a style that is new and refreshing.”

#ChockBates 🇺🇸209.13 🥈
Evan: “Our goal remains the same: we want to win Worlds this year.
It’s never a linear line to the top.
This season is just a new territory for everyone.
Competiton will be tough and we just have to be the best.”#NHKTrophy #GPFigure pic.twitter.com/PCLUngMRI0

The 2022 Four Continents Champions were third (77.00) after the rhythm dance. Today’s performance featured level-four twizzles, lifts and spin. They also picked up many positive GOEs throughout their routine and scored 114.10 for fourth place in the free dance. With a total score of 191.10, they managed to secure the third spot on the podium.

“Caroline and I are very happy about how we skated here,” said Parsons. “Of course we can be a lot better in terms of execution and the technical score. We have a lot to work on, but that’s been the theme of our season. We are just learning as we go, every competition we learn more. It’s an honor to learn from the best teams in the world. We are very happy this week.”

Their goal as a team this season is to “broaden the difference dance style.”

“We are experiencing and experimenting with the types of music we use,” said Green. “It isn’t necessarily the direction we continue with, it’s just something new we wanted to try and something we look forward to develop as a team. We are exploring different types of music.”

Green and Parsons feel their biggest strength is the combination of artistry and athleticism that they have together as a team.

“In a discipline like Ice Dance, it’s such a great opportunity to combine the artistry of ballet and dance with athleticism in 4 minutes and 10 seconds,” said Parsons. “I really like how we work together on and off the ice towards those goals to become better artists and athletes. We keep working towards that and improving every day and learn from our competitors. It’s that combination that sets us apart.

🥉#GreenParsons 🇺🇸 191.10
Michael: “Caroline and I are very happy about how we skated here.
Every competiton we learn more.
This season is about a fresh start and a learning experience.
It’s an honour to learn from the best teams in the world.”#NHKTrophy #GPFigure pic.twitter.com/OqW6A0lgHV

With 28 points in the Grand Prix standings, both Fournier Beadury/Soerensen and Chock/Bates have qualified for the Grand Prix Final in Italy next month.