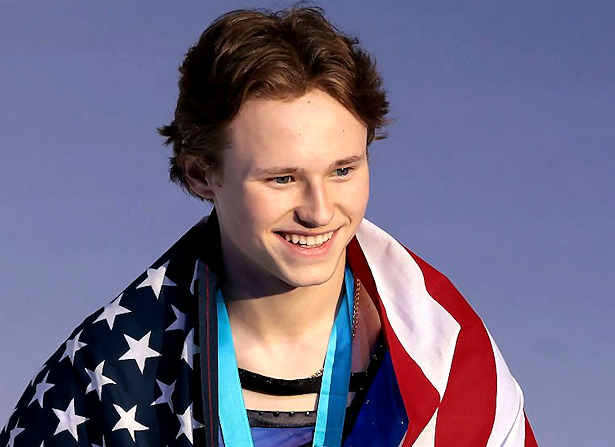 Ilia Malinin, the 2022 World Junior Champion, will be taking the ice for the Men’s short program at the 2023 Toyota U.S. Figure Skating Championships on Friday. And he’s ready.

“I’m definitely preparing, he said of the event, which will take place at the SAP Center in San Jose, Calif. “I’m always making sure I’m healthy and always staying on track, practicing my program and making sure that everything is going to plan. I ‘ve been sticking with what I’ve been doing and I’m very looking forward to this. It’s been a year since I’ve been to [nationals] and I’m hoping that in San Jose I’ll have a fun time and that it’ll be the best!”

Reigning champion Nathan Chen has dominated U.S. Nationals since 2017, but is currently taking a break from competitive skating after taking Olympic gold in Beijing. Malinin aspires to do the same.

“When I was visiting him when he was preparing for Worlds, I saw how much he was putting into practice,” said Malini. “He was doing a lot of programs and was just there and working as hard as possible to perfect every little detail. I feel like I took inspiration from him. I’m trying to focus that on myself, especially with these next few years. Just making sure that I’m taking every detail that I need to work on and just making sure that everything is comfortable as possible. With this plan, I’m hoping it will go the best and that I’ll be on the top like Nathan was.”

Malinin, said it would be “a dream” to achieve the same longevity and success that Chen has had at nationals.

“It’s impressive for him to be winning  those,” he said. “I’m always determined to push myself, and I hope I can put in that work and effort to be there, as well.”

Having landed the quad Axel several times in competition, one would wonder if the skater feels a “burden” or is expected to execute the element at every competition. Malinin said his priority is just to focus on what he’s been practicing and to make sure he’s sticking with what he’s been doing.

“I have been sticking with it,” he said of the quad Axel. “I am planning to attempt it there (San Jose), but again, it all depends on the situation. It’s always a huge risk to go for it when I’m not feeling the best. To me, my main focus is to prioritize the rest of the program and make sure that everything else is consistent and is clean as possible. We’ll see how that week will feel during all the practices. I hope that I’ll be feeling pretty confident going into the free skate.”

However, landing a clean quad Axel comes with risk, especially in terms of reward. For example, the base value for the jump (clean) is 12.50, while the quad Lutz is 11.50. Although Malinin is currently the only skater who has landed the element in competition to date, he feels the base could be higher. In 2016, the base for the quad Axel was 15.00, while the quad Lutz was 13.60—a 1.4 difference versus the one-point difference today.

“I’m not sure what made it change. I think maybe it’s because people didn’t want other people to try it,” he opined. “I think I was looking for a challenge. With (Yuzuru) Hanyu and other skaters attempting it, that gave me the motivation to try it. I think that even with how low it (base value) is, I will definitely keep trying it through this season. When the base value is higher, I’ll have it in pretty good condition and pretty consistent.”

The skater admitted to having a quintuple Axel in the back of his mind.

“It’s very hard to think of it at this moment since it’s still the middle of the season, Malinin said, smiling. “I have a lot in front of me, and now the main goal is to stay healthy and stay in as good shape as possible. After the season, I’ll think about it. We’ll see.”

Malinin recently went to California to work with Rafael Arutyunyan and choreographer and Shae-Lynn Bourne, who choreographed his free skate to “Euphoria” by Labrinth. The main purpose was to ensure everything was “working” in the program. A few tweaks were made so the routine would feel more comfortable and be bit more fluid. With Rafael, he focused on the technical side, as well as “mental training,” to be prepared for nationals.

While Malinin has the Technical Element Score (TES) in the bag, he feels that he could improve on the Program Component Scores (PCS). He observed that the PCS has not been as high as he’d like over the past few years.

“Me, my coaches, and the team I’m working with, we’re always trying to take the time to improve as much as possible and really focus on the artistry and creativeness,” he explained. “All those little details that come with skating. I think with having the jumps, it’s really hard to match both of them, but I’m always working to improve. I’m definitely proud of myself with how much I’ve gone this past year, even this season in general. I think I’ve made a huge step and there’s always more years to come before the Olympics. I’m hoping that I’ll have both the jumps and the choreography, artistry, and PCS as high a level as possible.”

Malinin shared that he’s been spending more time daily on his artistry. Prior to his warm-up, he takes the time to do more run-throughs without jumps; focusing on spins, choreography, and other details.

“During the warm-up, I spend a lot time with just having nice lines and simple steps so that it looks good,” he relayed.

The 18-year-old, who is coached by parents Tatiana Malinina and Roman Skorniakov, confessed that he hasn’t pushed to get his driver’s license due to time constraints. When he starts college in the summer, he’ll revisit.

“Right now, it doesn’t seem that necessary,” said Malinin. “The only places I’m really going is to school, the rink and home, but my parents are already going to the rink. I think that’s just a bit more work to have an extra car there. It works out that they (his parents) are always there and I’m there. It’s really convenient for me. Now I have my learner’s permit, so I’ll start driving with my parents. I’m really looking forward to it and it’s going to be a fun experience.”

Malinin is currently a senior at George C. Marshall High School, located in northern Virginia. The skaters said going to school, versus online, has definitely helped his social life.

“If I did school online, I’d be at the rink every day and it would be really hard for me to make new friends and even have time to just go outside,” he said. “It’s definitely helped me to open up to try new things and just find what other people do in their daily life and try those things as well.”

When asked the proper way to pronounce his name, he said in Russian it would be pronounced “Ma-leen-ian” and in the U.S., “Ma-linen.”