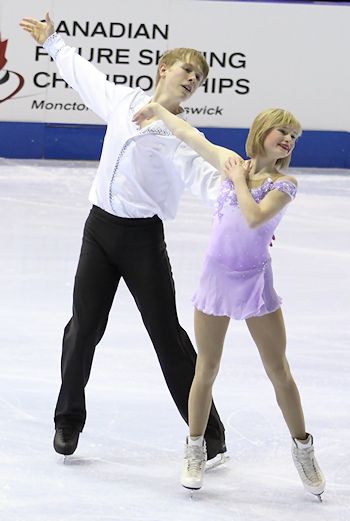 Hayleigh Bell and Alistair Sylvester of Central Ontario perform their long program to “Liebestraum” at the 2012 Canadian Figure Skating Championships.

Bell and Sylvester won Central Ontario’s third gold medal of the day with a nearly clean free skate set to Liebestraum. Only a small struggle with their side-by-side double Axels marred an otherwise lovely performance. The pair smiled throughout the entire program and were obviously thrilled at the end.

“I’m really happy,” Bell said after their skate. “We skated really well and got a personal best by about ten points.”

“I always get nervous,” Sylvester said, “but particularly today, because it’s a big day. I’m super excited and really happy.”

Both Bell and Sylvester, like many of the competitors in the novice pairs event, are double-entered in these championships. Bell finished 18th in novice ladies, and Sylvester is still to compete in junior men.

“I have my events spread out over four days,” Sylvester said, “so it’s more of a marathon than a sprint. But as long as I’m able to find time and Hayleigh’s able to find time between events to get away from all the stress, it usually turns out okay.”

The strategy is clearly paying off for them, as Bell and Sylvester are already setting themselves up well to move up. Their side-by-side double Axels and throw triple loop would place them well in the junior level.

Their Central Ontario teammates, Conway and Sherriff-Clayton, stayed in second to win the silver medal, scoring 105.90.

Conway and Sherriff-Clayton also went for a throw triple – a Salchow, but fell on their attempt. They also struggled with planned side-by-double Lutzes, receiving credit for only singles, but their pair elements were excellent. High Grades of Execution (GOE) for their pair spin and spirals helped them to secure a silver medal – two places higher than their finish last year.

Conway and Sherriff-Clayton clearly have an excellent rapport with each other and Ballet Egyptien was a lovely and original choice for this year’s free skate. Sherriff-Clayton will compete in junior men, so he will go head-to-head with Sylvester once more this week.

Although the pair from Québec struggled with their side-by-side jumps, the pair elements were strong and they remained calm throughout the program. Their skating had good flow, and their total of 93.88 meant that they edged onto the national podium, matching their ranking from Skate Canada Challenge in December.

Madelyn Dunley and Wesley Killing (WO) maintained fourth place in the free place and ended up with 91.50 points overall. Dunley and Killing were the only novice pair to try two triple throws, toe loop and Salchow, and they landed both of them beautifully.

Unfortunately, Dunley and Killing struggled with several of the other elements, including side-by-side double Axels, two lifts, and a pair spin. Dunley barely had enough time to cool down, change costumes, and warm up again with her partner between winning the novice ladies title and competing in the novice pairs free skate. While a second medal would have been a terrific prize, her effort is still quite commendable.

Slipping two places after the short program, Jordyn Harper and Shaquille Davis (CO) ended up fifth. Harper and Davis went for a throw triple Salchow, but could not land it cleanly. They also struggled with their jump combination, receiving credit for only a single flip-double toe loop, but their double Lutzes were solid and they displayed a nice performance quality in their “Sheherazade” program.