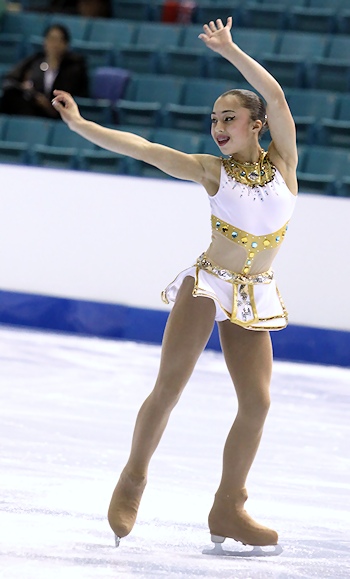 Gabrielle Daleman of Central Ontario performs to music from the “Sahara” soundtrack at the 2012 Canadian National Figure Skating Championships.

With the only clean triple Lutz in the event to her credit, Gabrielle Daleman (CO) won the short program on Monday evening. Daleman’s big-ticket jump was the opening element in her Sahara program, and she went on to complete a triple Salchow-double toe loop combination, as well as a gorgeous double Axel.

Daleman’s solid spins also helped her to secure a score of 47.59, giving her more than four points over her closest competitor heading into Wednesday’s free skate.

“I want to skate clean [in the long program], have fun, and hope for the best—a junior national title,” Daleman said following her short program.

Julianne Séguin of Québec finished second with a score of 43.10. After opening with a nice triple Salchow-double toe loop combination, Séguin soared through the rest of her elements, including two level four spins, a level three footwork sequence, and a lovely double Axel. Her jazzy short program was full of charm, and the recent Skate Canada Challenge champion was happy with her effort.

“I’m very proud of myself,” Séguin said. “I’m happy with what I did and I’m just excited to do my long.”

An edge call on her double Lutz was the only error in Véronik Mallet’s (QC) lilting short program to music from Memoirs of a Geisha. Last year’s Canadian bronze medalist on the novice level hit a solid double Axel and a triple Salchow-double toe loop combination at the top of her program.

Mallet has 42.88 points heading into the free skate, and for her, that is still well within striking distance of the title. Last year, she jumped 15 places between the short program and the free skate to win her bronze medal, however, the skater is not trying to focus too much on her placement.

“I just want to have a beautiful performance,” Mallet said about the upcoming free skate.

Natasha Purich (AB/NWT/NU), the only junior-level lady at the Canadian Championships who competed on the international circuit in singles this season, delivered a strong short program that was ranked fourth. Although she had to fight for a couple of landings, Purich’s feisty spirit kept her on her feet and propelled her through the program. With 42.41 points, she is less than a point from second place and will certainly be in the fight for the medals.

Roxanne Cournoyer’s (QC) short program to music from Pearl Harbor was marked by smooth skating, although her double Lutz was just a little tight. The 41.52-point effort opened with a strong double Axel and finished just as well, with a lovely level four combination spin.

The junior ladies event will conclude on Wednesday evening.