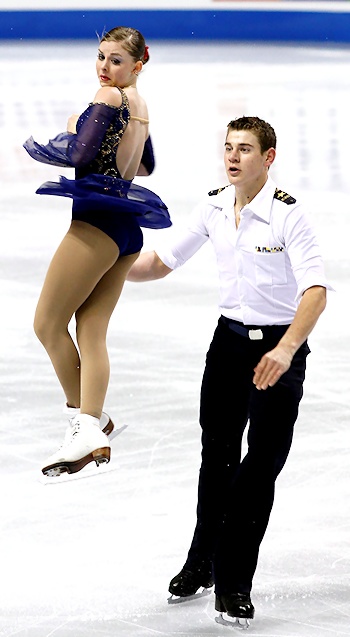 It was a huge day in the lives of Delilah Sappenfield and her son Larry Ibarra. The tandem, who coach out of the Broadmoor Skating Club in Colorado Springs, Colo., swept the top three spots of the podium of the junior pairs competition at the 2012 U.S. Figure Skating Championships this afternoon in San Jose, Calif.

“I don’t know that I’ve fully gelled with this yet,” said Sappenfield. “My kids skated so well, and that’s the most important thing. They were training well in their preparation for this competition, and I am just so proud of them.”

Sappenfield characterized each of the teams in one word, each different from each the other—Explosive. Lyrical. Classical.

Leading the charge for team Broadmoor are the ‘explosive’ team of 16-year-old Haven Denney, and her 19-year-old partner Brandon Frazier.

“It was just like at home,” Frazier said of their Pearl Harbor free skate. “It felt like any other run through at home. We were very prepared.”

The gold medalists opened with the only split triple twist of the day, setting the tone for a very strong outing. A fall late in the program on a throw triple loop kept Denney and Frazier from winning the free skate, but their lead from the short program yesterday kept them in the top spot.

“Truthfully, I’m just really happy that we stuck with the plan that (Sappenfield) laid out for us a month ago,” Frazier explained. “We had some good days and some bad days, and no matter what, she still inspired us. We were able to just let our bodies take over and do the job for us today.”

Denney and Frazier earned 148. 84 points in the competition, and are looking forward to competing on the senior level next season.

“Haven is my future,” Frazier said. “Is that okay with you, Haven?”

Denney laughed and nodded in agreement. “Of course!”

Team ‘lyrical’, Britney Simpson, 15, and Matthew Blackmer, 20, moved up from third place after the short program, to win the silver medals. The duo placed first in the free skate.

“We did everything that we could do,” Simpson said. “It was just like training at home.”

“This is my first nationals on any level other than Junior Nationals,” Blackmer explained. “I am glad that we did so well, but I’m also happy that I can relax now and really enjoy the rest of the competition this week.”

Simpson and Blackmer have a great shot to be named to the Junior Worlds team as well, and look forward to competing next season again on the same level.

“We are staying junior,” Simpson confirmed. “We already decided before coming here.”

They earned 146.43 points in the competition.

Team ‘classical’ – 18-year-old Kylie Duarte and 20-year-old Colin Grafton, finished with the bronze medals. In their ninth season together as a team, the duo agreed that sticking together has made all of the difference in the world.

“Every day brings something new,” Grafton said. “We take everything step by step, and over time that has served us well.”

The bronze medalists, who will compete on the senior level next season, skated to Dr. Zhivago. They attempted some of the most aggressive technical content of the competition. A throw triple loop and a triple toe loop-double toe loop combination were perhaps the biggest highlights.

“We drew from last year’s experience of skating last, and it made it a lot easier,” Grafton said.

They finished the competition with 144.35 points, and hope to be named to the three-teamed Junior Worlds team as well.

Slipping from second in the short program to fourth overall were Jessica Noelle Calalang, 16, and Zach Sidhu, 20. Two falls marred an otherwise good program, and they finished with 134.84 points.