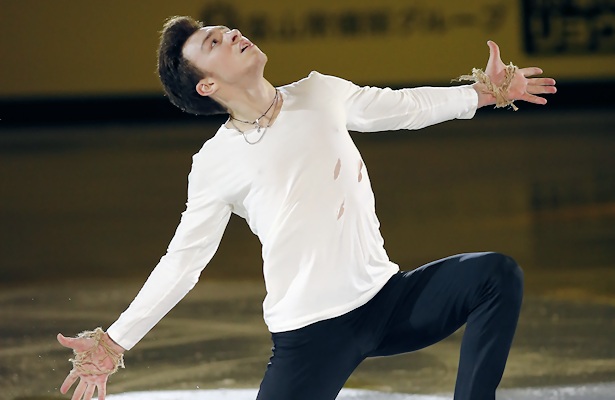 Dmitri Aliev, who turned 18 on June 1, had a successful junior year with a gold medal at the 2016-17 ISU Junior Grand Prix Final and a silver medal at the 2017 ISU World Junior Championships under his belt. In previous years, he used to be mostly a strong jumper, but he has improved a lot in the components.

“Last season, the goal was to improve the second mark,” he offered. “We put a lot of effort into it and we achieved some results in this direction.”

Mikhail Kolyada and Maxim Kovtun were the top Russian men last season and had some good results, notably silver (Kovtun) and bronze (Kolyada) medals at Europeans. However, heading into the Olympic season and with two spots for Pyeongchang on the line, Kolyada and Kovtun will need to watch out for the next generation of Russian men that is coming up from the junior ranks—especially for Aliev.

The two-time Russian Junior champion, together with his coach, Evgeni Rukavitsin, and choreographer, Olga Glinka, have been working non-stop since the end of the season.

“This season, while we continue to work on perfecting the quality of my skating, the goal we set is to make the program content significantly harder,” the skater noted, who has already tested the senior waters at three Challenger Series events. “It (going senior) is not a challenge. It is the next, responsible and important stage for me. Each athlete gets there that moves up from the junior level.”

Glinka feels that her student has changed a lot over the past year and thus is ready to move up completely to the senior ranks. She describes him as a very interesting person, wise beyond his years.

“He thinks deeply and out of the box,” she explained. “He has grown up, matured and strengthened his character. Last year in July, there were problems for him with the triple Axel in the second half of the program. Now the triple Axel is just another element. Sometimes the coaches let the skaters do a run-through without elements, but for Dima (Dmitri), now this always means a run-through with triple jumps.”

Coach Rukavitsin is very pleased as well with the athlete’s development and stated the past season was very successful for them despite some difficult competitions which “only pushed him to develop actively.

“Dmitri has fulfilled several tasks,” said Rukavitsin. “He has worked a lot and actively on his skating skills and the choreography so he can move to the senior level with a certain, broader base of movement. Experience plays a huge role in our sport.”

“Dima appeared relatively late at the international stage and significantly later than his peers and competitors in the Russian team,” he further explained. “You have to recognize that he is developing by leaps and bounds, even though not everything works out at the first attempt. But Dima is able to analyze and he learns from his mistakes—even from the mistakes of others. This is a guarantee for success.”

“The first camp (in Italy) was at high altitude, which was new for me,” he offered. “The first camp in Latvia focused on athletic off-ice training with some on-ice training, while the second camp was precisely about training on the ice. Overall, the preparation goes as planned and there are no critical changes in our way to work. We are trying to pay attention to details with maximum of control. Now it is the off-season and we are trying to learn everything that is necessary for victories at major events.”

“I felt confident that I was able to do it and it became even consistent,” said the World Junior silver medalist. “It was even easier for me to do than the quadruple toe loop. It felt comfortable.”

He did quad Lutz-triple toe-triple loop combinations in practice. “So, I just have to continue working on it and then try to include these jumps into the program,” he added.

At Junior Worlds, the Russian led after the short, but slipped to second after almost falling on the lone quad toe, while USA’s Vincent Zhou pulled off a quad Lutz and two quad Salchows.

“I knew with one quad it would be difficult to compete with the American,” Aliev admitted. “When I did the quad toe, I thought for a split of a second, ‘you’re not first anymore.'”

Nevertheless, the skater was still pleased with having won the silver medal.

The Russian looks up to skaters such as Olympic champion Yuzuru Hanyu, Four Continents champion Nathan Chen and two-time World bronze medalist Boyang Jin—all of which perform multiple quads in their programs.

“Figure skating does not stand still, “Aliev observed. “You can see that it is progressing day by day. When Boyang Jin tried to do five quads (in one program in 2015-16), it seemed incredible. Now Yuzuru Hanyu, Nathan Chen, Shoma Uno are trying it. Athletes are learning new quads—Lutz, flip, loop—and they land them. Everyone is upping the ante. Everyone is trying, because at the Olympic Games, you need to surprise and somehow beat your competitors.”

The new programs have been mounted with choreographer Olga Glinka. While Aliev is not ready to share the music choices yet, he shared some information about the programs.

“For the short, we picked a classical piece and deliberately increased the tempo and speed of my skating,” revealed the 18-year-old. “The long is a lyrical style. We’ve made both programs significantly harder.”

Aliev was thinking of trying a different style, but after reading a lot of positive comments from fans stating that the lyrical style suits him very well, he decided to stick with it this season.

The skater feels that expressing emotions on the ice is one of his strengths.

“I am a very emotional person and I take everything close to my heart,” he said. “When I am on the ice, I am trying to unfold so much that it transfers to the audience and that the spectators and judges feel it.”

The reward for this was a rising component score in the past season. In fact, he had the highest program components at Junior Worlds.

“To be honest, I love jumping in practice, however, in the past few months, I really like to skate my programs,” he admitted. “I think I am something in between a technical and an artistic skater.”

Aliev, who comes from the northwestern Russian republic of Komi from a family of competitive skiers and now lives and trains in St. Petersburg, sets high goals for this upcoming season.

“My plan is to put forward my best side right from the very beginning of my senior-level career,” he said. “Obviously, I want to go to all high-ranking competitions in the season. The season will be very important for all athletes on the national team. My goal is to give my maximum and to perform at the Olympic Games.”

The coaches see a bright future for their student.

“We have significantly increased the technical difficulty of his programs, and the task of the season is to show in competition everything he is capable of at this moment,” Rukavitsin commented.

“His abilities are so unlimited that he is capable of achieving the biggest results and victories in the future,” choreographer Glinka stressed. “Everything will come at its time. It is essential to work smartly in order to master step by step all intricacies of your game. The most important thing is that you love what you are doing.”

The World Junior silver medalist has been scheduled for his home Grand Prix Rostelecom Cup in Moscow, as well as the NHK Trophy in Japan. Additionally, he plans on competing at the two Challenger Series events—Nepela Trophy in Slovakia in September and Tallinn Trophy in Estonia in November.

Aliev just graduated from high school this spring. He had stayed enrolled in his school in his hometown of Ukhta, 1800 kilometers from St. Petersburg, and had been studying by correspondence.

“I got my diploma (from school) and now I will attend the school of Olympic Reserve and later enroll in the institute (of physiculture),” he said.