2019 World Synchro Skating Championships | Golden Skate
Menu
Log in
Register
Navigation
Install the app
More options
Contact us
Close Menu
You are using an out of date browser. It may not display this or other websites correctly.
You should upgrade or use an alternative browser. 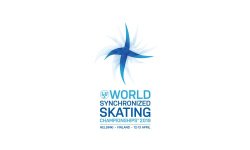 
The ISU Channel is covering the event:

2019 WORLD SYNCHRONIZED SKATING CHAMPIONSHIPS - HELSINKI
This live stream is not available in Japan, Italy and Finland
Click to expand...

NBC Sports Gold is covering the event in the US.

Which if you can believe Google translate is
"In Finland, the Yle television formation is the MM-kisan ja katsottavissa and can also be watched @yleareena Sta."


I just read the tickets were sold just in about one hour, 12 000 all event tickets, only very few places very up are left. They tried to find larger arena but it was not possible. Synchro is very popular in Finland. There are 182 synchro teams in Finland

Stayed up to 2am EST to purchase tickets. Didn't get tickets in the sections I wanted but just thankful I got a pair. Booked my flights this week, and so the countdown begins. I'm coming from Canada.

I just added a lot of info to the OP that I hope will be helpful.

Does anyone have any info on TV or livestream in Japan or Italy?
J


Synchronized Skating viewers have the possibility of watching the Championships on the following Channels:
JSports in Japan
Rai in Italy
YLE in Finland
ISU Skating Channel for the rest of the world
S

I am so excited for the next two days!

I’m still beyond elated for Nova Senior’s win at the Canadian championships last February, earning them their first ever trip to senior worlds, after only three seasons competing in the senior category. While I also absolutely adore and respect Nexxice Senior and Les Supremes Senior so very much, what Nova pulled off was one of the most beautiful synchro free programs I’ve ever seen in senior level synchro.

In case you missed out on the amazingnees: https://youtu.be/ssDbNPrcFQA
J

I think Canada could do extremely well at Worlds. Nexxice always has phenomenal skating skills and superior edge quality in the no hold. I like how they are skating last in the short as I think those superior skating skills will really stand out after having seen the rest of the teams prior to them. One of my favourite things about Nexxice is their precise execution. It's exactly what I want to see in synchronized skating. Every movement matches. In their short, the extension and the matching quality of the spiral positions in the moves element is amazing and I like how in their preparation for the intersection, as the 2 groups circle around each other, it precisely matches the build in the music. Very cleverly choreographed to set that element preparation to that point in the music. I like the expressiveness to their artistic wheel in the free. It adds nicely to the interpretation and mood of the program. The transitional section after the wheel is neat where the 2 lines glide past each other to match the rise and fall in the music.

The team I'm really excited about though is Nova Canada. After defeating the defending World Champions at the Mozart Cup as pretty much an unknown team, I can't wait to see how Nova Canada does at Worlds this weekend. What an exciting team with excellent programs. In their short, I really like how the music builds throughout with the tempo constantly increasing. It's a dynamic and convincing program. You have to be a fantastic skater to be able to perform the intersection and the twizzles at the fastest points in the music at the end of the program. I also like how they use their whole bodies to express the character of the music and highlight original transitional moves using different levels, particularly into the travelling wheel and prior to the intersection. I hope their components in the short aren't impacted by skating early or by not having an established reputation at Worlds. I think they are going to shock the world here with how incredible they are.

Their Halo free program is my favourite of the season. It's the program I watch over and over again. I absolutely love the trendsetting lifts that are used not only to highlight their artistic elements (wheel, block, and circle) and their creative element (stunning!), but they are also used as unique, transitional choreography. I don't think I've seen a Canadian team approach the back to back intersection with the speed that they do, performing turns all the way through without hesitation. The transitional section that connects the artistic block to the pair element is really cool. The arm movements and body lean express the feeling of the music beautifully in such a nuanced way. I hope they have an excellent starting order in the free program to potentially bring down the house with this program.
S

Happy to see the tech box also in synchro! Makes it easier for me to follow the elements. Like for new fans of single/pairs and especially dance(for me) figure skating I guess.

Marigold in not so nice skirts

Happy to see the tech box also in synchro! Makes it easier for me to follow the elements. Like for new fans of single/pair sand especially dance(for me) figure skating I guess.

Marigold in not so nice skirts

Who can challenge Rus/Fin after Sweden quit?
S

This won't be a surprise given my post upthread, but I think you could make a very solid case that Nova should be a few places higher, 4th at the very worst in my opinion and certainly ahead of a team falling on their no hold. I get that it's human nature to feel you shouldn't be giving out last group GOE and PCS early on in an event, but if you skate that exact program 10 spots later, I bet that you would see many more +4's and components firmly in the 9's. Kudos to the American judge for giving them components that put them among the other podium contenders. I'll be hoping he's drawn on the panel again tomorrow. It would have been nice if the Canadian judge had been drawn for the short, but at least she will get to do the long program tomorrow.
S

I had to miss the live stream of the entire short program today. I didn’t outright forget, I just had so much keeping me busy over the last 24 hours, which included driving my parents to the Toronto airport to attend my eldest aunt’s funeral in Newfoundland. :sad21:

Some of you may recall me mentioning my aunt in the Canadian skating thread within The Edge, in reference to Kaetlyn Osmond. My aunt was a Roman Catholic nun, who, for the last five years, had a pastoral posting in the tiny hamlet of Rushoon, population: 250, just outside of Marystown. This is the town where Kaetlyn spent her early childhood years and took up figure skating, after seeing her older sister starting to become serious herself about the sport. The family headed to Montreal at age nine, then to Alberta a year later to train competitively with Ravi Wallia. My aunt didn’t know KO, but she knew her grandparents and several other relatives. A handful of them left beautiful tributes on her obituary’s guest book. Lovely people, those Newfies.

Anyway. I must apologize for the

topic: hijack of this thread. I realize I have a an infamous habit for general thread derailment around here laugh2: understatement of the century), but seeing how I’m also the self-crowned uberfan and expert of all things synchro at GS, it likely would come across as weird to you guys when I miss a live synchro event, especially if it’s worlds. So there’s ,y excuse, I think it’s more than valid.

So my main point here involves this question: would anyone know of a working link or two for any of the short programs? I searched both YouTube and Dailymotion, sans success. Please please please, help out your homegirl SS if you have the magical key to view them.

It would be extremely appreciated. I’d like to catch up before the free skate event start later this morning. I have a VPN if there’s potential country blockages.

ISU has it for everywhere but the USA, Italy, Japan and Finland

It's several months late, but better late than never...

No short programs were aired on Canadian television.
You must log in or register to reply here.