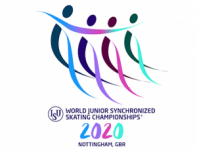 ​
The 2020 ISU World Junior Synchronized Skating Championships (WJSSC) will be held March 13-14, 2020, at the Motorpoint Arena in Nottingham, Great Britain. The WJSSC were held for the first time in 2013 and held biennially until 2017. The WJSSC is now an annual event sanctioned by the International Skating Union.

I am sad to see that the US Junior teams who were scheduled to compete, Skylines and Teams Elite, did not go, I presume due to travel issues due to coronavirus.

Results of the SP:

Btw, the video is still available, and the FS is at 10:30 AM EDT
Live stream link:

In Finnish Figure skating association's page was told that US teams were already in the town, but they turned back home before the competition started. Japan, France and Italy did not go at all.
Team Mystique (FIN) is has been coached by the coach who is in the middle of scandal I wrote in another thread. They did quite well at their first big competition despite that confusion.
N

dorispulaski said:
Btw, the video is still available, and the FS is at 10:30 AM EDT
Live stream link:

This was awesome! Loved the comeback kids from Finland and their reactions upon winning. Somewhere, SarahSynchro is smiling

And the video for the FS is aso still available.

The free skate video is still up!
You must log in or register to reply here.

Provisional allotments of ISU Championships 2022 and 2023
2