2021 Finlandia Trophy: Men's Short Program | Page 24 | Golden Skate
Menu
Log in
Register
Navigation
Install the app
More options
Contact us
Close Menu
You are using an out of date browser. It may not display this or other websites correctly.
You should upgrade or use an alternative browser.

Seven Sisters said:
I have seen him skate really well in the SP before—only to have a less than stellar FS
Click to expand...

But he skated poorly in the SP here

elektra blue said:
so the only one who didn't mess things up was...Messing?
Click to expand...

I started to say something about Jason not really messing up - but then I got the pun! LOL

now I am breathing again.

Sinnerman, what a masterpiece, oh Jason please skate this for the rest of your days

and in the style of hyphenations, go Alaskan Canadian Keegan

sorry the rest was a bit of a splatfest. But that’s the men

sworddance21 said:
I started to say something about Jason not really messing up - but then I got the pun! LOL
Click to expand...

i know i know, i'm an idiot what can you do? i couldn't resist

time for me to go and drink my feelings, see you tomorrow for a brand new emotional train wreck. love you all

Kolkada in 3rd? What am I watching?
K

Not Jason skating to SL after Kolyada's SL tomorrow...

Well, lets get one thing straight. Despite being wobbly, Misha is still third behind Jason and Keegan who had a field day. Misha's done actually okay, it's Dima and Zhenya who should be a bit deflated, whereby Zhenya is also still starting out in the Senior ranks. So, I'm actually not too down.
The pairs put me in a great mood right from the start.

For those who still have problem to open the official results page: 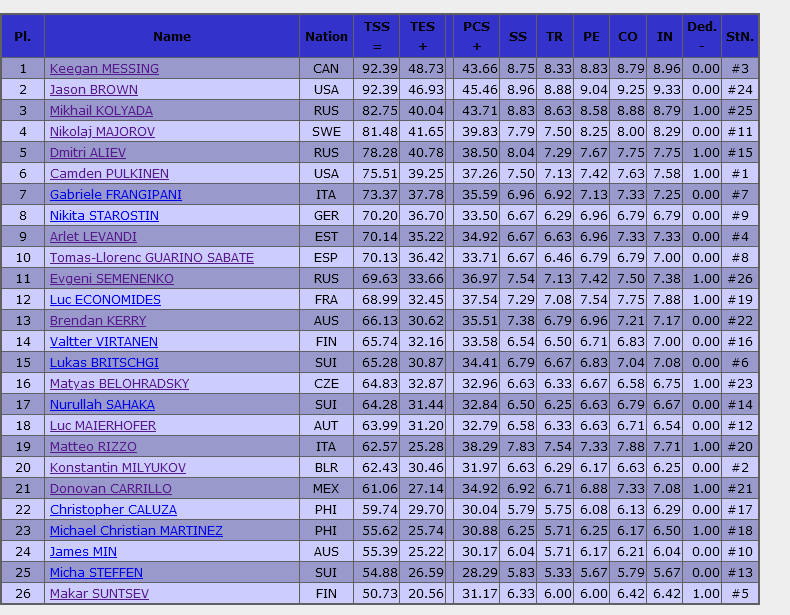 I saw Camden skate a gorgeous SP live! In 2018. It definitely feels like it's been a while. Majorov got a medal at the 2020 Nebelhorn Trophy, didn't he? He's had some solid outings. 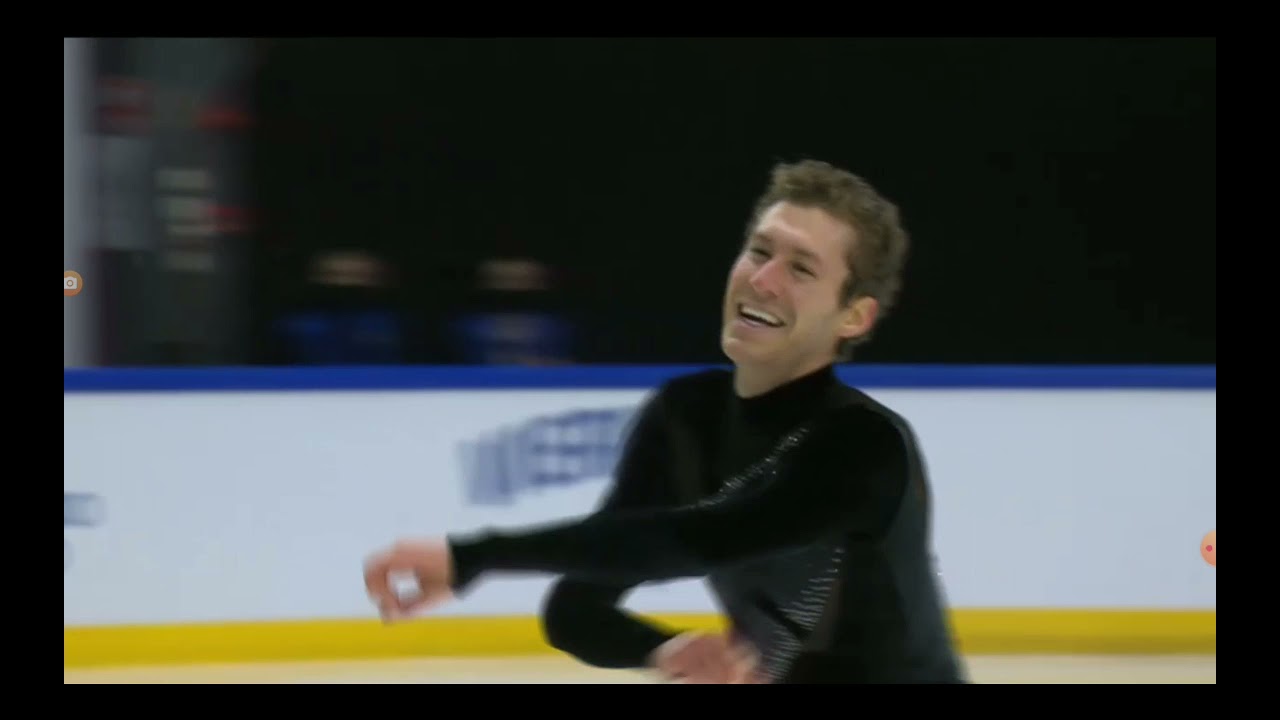 Here is his skate

Oh my, just arrived here and watched Jason. It made me cry, it was so good. I'll go and watch some of the other guys now....absolutely (and pleasantly) surprised that Nicolaj did so good. While Keegan and Jason scoring the exact same number of points (but technical points make the difference in the SP) is just so surprising.
S

Novalis said:
I'm constantly also chatting with some friends. So very little time for this
Click to expand...

I didn't mean to imply you should constantly give us updates! Just that, if you want to, you could give us a in-person review after the competition ends.

Seven Sisters said:
If you can, please have someone attend to Aliev's facial hair with, at least, equal haste!

The lads must have all made a bet or something—nobody shaves until they land all their jumps
Click to expand...

Keegan has a new baby at home, so he gets a pass for me. It fits the exhausted dad look.

LadyB said:
Well, lets get one thing straight. Despite being wobbly, Misha is still third behind Jason and Keegan who had a field day. Misha's done actually okay, it's Dima and Zhenya who should be a bit deflated, whereby Zhenya is also still starting out in the Senior ranks. So, I'm actually not too down.
The pairs put me in a great mood right from the start.

Well, Dima actually had a higher tech score than Misha. It was PCS that made the difference (which I don't totally agree with).

Keegan skated well...another of those great split jump guys but he does look a bit tired. Kudos! He just got himself deservedly in first.

Poor Donovan. He's my hero. Falling like that (it was a nasty fall, and he was bleeding) and still continuing in his wonderful musical style. Another kudos!

Nicolaj: Yay, yay!!!!!! He hasn't got the PCS, but he definitely had something really interesting today. I've never seen him skate so wel before. Go, go, go! We want you at the OG (I haven't seen anyone who doesnt), and this is the way to go! And, yes, Nicolaj won a medal at Nebelhorn last year but that was in a much depleted field due to our favourite pandemic. This is just awesome.

I do love Mikhail. He may have missed his combination and have a fall, but he still remains beautiful to watch. I love his style.

Poor Dmitri. Not so hard a fall as Donovan but it seems he got a bit lowballed on the PCS. He is also one of those beautiful skaters, and even a fall shouldn't distract from that.

Well, I'm glad of course Jason skated well and moved me - as he usually does. No man can skate to Sinnerman but Jason!
Last edited: Oct 7, 2021

It was so cool to watch the first group of men warming-up already - I had forgotten the speed, the busyness of the 6 min period. Camden's cool and calm 4T as the first jump in the competition got me almost to tears, I had missed this so much... He was also otherwise nice to watch, the first time live after years of seeing him in juniors. Pity about the 3A. Even watching Keegan was ok altough his entrances into jumps are still among the ugliest. The highlight of the first group was Arlet Levandi's step sequence - I like the version of Habanera, I like what Benoit dreamed up for Arlet and I like the dedication and commitment he has for those steps.

In the second group I was curious to see what Gabriele Frangipani would look like. I had not seen him live before and in his case at least this competition suggested that he is one of those who look better on camera. It was surprisingly small and not awfully impressive despite the fact that I like that program and the way he has good upper body and arm movements. Tomas-Llorenc was good and am happy for team Spain for that!

The high point of the third group was Nikolaj Majorov and especially his step sequence. He really got the slowly growing audience going! The music and program are a good fit for him and he really gave those steps his all! I hope he gets to to the Olys in the end... Dmitri Aliev did not bring his quads with him to Espoo, but he looked ok despite that (the 3A was absolutely fine). Still some of the best body movement and arms around. I was not sure about the program based on the Russian test skates, but it looked better than ok live.

Last fall I went to Espoo to watch a nationals selection comp and for the first time ever somehow thought that Valtter Virtanen looked good. I repeated that experience today which fills me with disbelief and bafflement. If only he could jump the big jumps. The skating and movement is good, he has a feel for the music and all. Christopher Caluza's reaction to his performance was just Luc Economides had some of the coolest dance moves of the night. Then I was expecting Matteo Rizzo doing Johnny Cash and did not get any. I guess it was Måneskin, but I was not sure if they had kept the Cash choreo coz very little of what he was doing seemed to have anything to do with the music. It was just a big mess in every possible way.

For the last group I was present only partially - I had to witness Javier Fernández's first appearance as a coach from the JGP at Linz live... But I liked Donovan Carrillo's costume from the front, not sure about the wings (?) at the back or of his skating or the program.

Got back to Espoo just in time for Jason. Now, I was expecting this with great curiosity as I have only seen him live in 2017 at the Worlds and was disappointed at how somehow unimpressive he was live (despite the nifty transitions). I have really liked the Sinnerman on camera and was expecting a kick from it also live. He did make an impression with his super silent blades during the warm-ups. The jumps looked also good and confident. I watched and really liked the transitions to the spins, I thought some of the other detail was cool and interesting. But I find it hard to describe how I felt afterwards, because I think I did not feel anything. It was all fine, great skating, but I just did not get anything from it. Just felt... indifferent? Like "ok that was fine, what's next?" So I guess Jason live still has not made an impression on me. I wonder if he will ever do?

Kolyada next up. Another silent skater. The wooden Nutcracker is a role he can almost do. But I do wonder if he will end up like in 2017-8 when he was trying to solidify 2 new quads into his programs. This time maybe only 4S in addition to the 4T, but as neither worked... Semenenko seemed less like a dutiful civil servant live than on camera, but it was pretty bland.

I would have loved to see the free tomorrow, but unfortunately have to skip it...

@eppen, to be honest, I don’t think this was one of Jason’s best performances- he looked tired or nervous or both - so that may have impacted your enjoyment. But it also sounds like you watched him with a lot of expectations and were trying to analyze him while watching as well. If that’s true, it’s perhaps not surprising that you didn’t feel carried away by it. I did notice that most people in the audience really seemed to love it.

I got carried away by Jason...but then I always do (I am a fan). So when ever someone else doesn't, it just happens. I'm just jealous of anyone who could watch Jason live. Good for you @eppen. And that we don't agree? Oh, well, I think we will agree on other skaters (like Javier). We don't all have to like the same thing. How boring that would be - and I should know what being boring is. Just go and read the Pairs thread.

However, my beloved (new) pairs couple were not boring at all! Good for you Spanish fans. It's such a joy to have a Spanish Pair doing so well.

SnowWhite said:
Well, Dima actually had a higher tech score than Misha. It was PCS that made the difference (which I don't totally agree with)
Click to expand...

Sure, you're right. Maybe it was misunderstanding, but I only wanted to respond to those who sounded like Misha had completely messed it up, which in my book wouldn't have landed him on a potential medal spot. I'm a big time Team Russia fan, the more of them as high up as they can, the better. In any order.
You must log in or register to reply here.