2022 Olympics Team Event: General Info | Page 20 | Golden Skate
Menu
Log in
Register
Navigation
Install the app
More options
Contact us
Close Menu
You are using an out of date browser. It may not display this or other websites correctly.
You should upgrade or use an alternative browser.

Jasira said:
Galliamov said after the FP that he was so tired he had to take some vitamins. I hope the team doctor didn´t give him something else

I don't want to speculate either, and I don't think it's that.

But yes, Galliamov seemed really fatigued during the team FS (and not just because of the lift error).
S

I certainly didn't expect this news when I signed on the Internet today. Although on second thought it's not that much of a surprise. I hope it gets sorted out correctly and as quickly as possible. If it is Kamilla since she is a minor she may not have even known she was taking a banned substance. What a mess indeed.
C

museksk8r said:
I am reading so many reports and allegations and yes, this is rapidly getting very messy. Figure skating has had such a tarnished image and history already in the Olympics and this is shaping up to be another scandalous chapter added. I don’t agree with the idea of stripping medals from athletes, usually minors who have no knowledge, who tested positive when these sins are being committed by adults who should know better. There has to be a way to punish the adults who are actually at fault without shattering these athletes’ hard work and dreams.
Click to expand...

Very messy for figure skating indeed. And if it's Russia that would just be so disappointing (albeit unsurprising) because they've literally had their name changed the last 3 Olympics because of doping, and most of their athletes have been clean.

I suppose we were due for a figure skating scandal, but not this way.

I just read 5 minutes ago that Kamilla is not allowed to skate in the womens event… maybe it ist still a rumor?
K 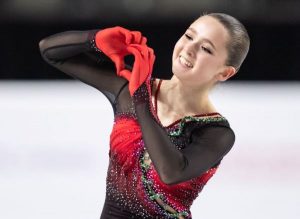 Valieva will not be allowed to the individual event, and the team event’s medals will be taken away from the entire Russian team

As it became known to SE, Kamila Valieva, who is suspected of violating anti-doping rules, will be suspended from the competition and not allowed to participate in the individual tournament.
fs-gossips.com
B

Stephine said:
I just read 5 minutes ago that Kamilla is not allowed to skate in the womens event… maybe it ist still a rumor?
Click to expand...

where did you read that

Gossip is gossip. Not fact.

This entire situation is awful.

Bad for the Olympics, bad for Kamilla and the Russian team, and bad for figure skating.

The ISU/IOC need to get hold of this story NOW. Whatever it is, get the facts out, because the speculation is worse. The longer this goes unaddressed, the wilder the gossip, the speculation about coverups, the suspicions cast on others. This is quickly spiraling out of control.

And once the story is out, let the chips fall where they may.
C

Until there is an official IOC report, the rest is gossip/speculation.

This is starting to get messy and falling on Valieva which is unfair and can actually disrupt her and the other team Russia skaters from skating their best in the individual.

CanadianSkaterGuy said:
Until there is an official IOC report, the rest is gossip/speculation.

This is starting to get messy and falling on Valieva which is unfair and can actually disrupt her and the other team Russia skaters from skating their best in the individual.
Click to expand...

Agreed. No official statement has come out. But sometimes I worry cause sometimes insiders are right....

dorispulaski said:
If it is indeed Russia, it is very odd because all the Russian team members competed in both the short and the long programs, and nobody failed any drug tests after the short program.

The identity of the team is just rumor so far.

I hope no one took an over the counter drug for symptoms of COVID or other disease. In fact if I were to guess, that would be what I think might have happened. Elena Berezhnaya & partner were suspended for a season for taking a cold remedy once.

I am guessing it was not any of the men, since they were allowed to skate in the SP, except of course, Vinnie did not skate. I hope it is not poor Vinnie. He has had enough bad luck.

In fact, looking at the scoreboard, surely the whole team should only lose the points of the one person/couple who failed the drug test. So at most, if it is Russia, the most it should lose is 20 points, for a score of 54 points, and that still is ahead of Canada.

And if it is Vinnie, the US would lose 8 points, for a score of 57, still ahead of Canada.

So clearly, this is All very puzzling.
Click to expand...

I believe that in addition to ROC losing Kamila’s 20 points, each of the other teams in the final would gain 2 points as each female skater would now place one position higher in each segment after Kamila’s results were removed.

I am just aghast given history that the irresponsible adults at play would allow something like this to happen again. Unbelievable!

Valieva will not be allowed to the individual event, and the team event’s medals will be taken away from the entire Russian team

As it became known to SE, Kamila Valieva, who is suspected of violating anti-doping rules, will be suspended from the competition and not allowed to participate in the individual tournament.
fs-gossips.com
Click to expand...

Editorial staff of "SE" apologizes to the athlete and readers for the unverified information, "- said in the publication. link
G

How convenient this positive test result turned up after ROC couldn't replace Kami anymore. The result is from 12/2021.
M

( this is very sad. I really hope that this doesn't involve any under 18s. If this does relate to Valieva (obvs we don't know), she is just 15 and probably unknowing/pressurised - shame on the adults involved who should have protected her. I really hope none of the athletes get hate because almost certainly even if they weren't explicitly pressurised, the Russian federation have created a very pressurising environment. A really sad shadow cast over this Olympics
A

If I believed in conspiracy I would say that is one ... but let's analyze the facts:

_ Any women in the ROC team would be first, no matter who would be chosen ... so why risk it?
_ ROC is under a magnifying glass for doping ... they aren't stupid .. to put an athlete with doping in the team event when they have other 2 for the win.. doesn't make sense.
_ Eteri doesn't care who wins .. can be anna, sasha, kamila... why risk Kamila
_ Kamila already had the judges and everyone on her side .. why make an stupid decision
_ Eteri wouldn't risk her reputation for anyone ... she has the gold medal in the team who cares about her name

When I read the news I thought maybe Nikita or Galliamov ... one because of his back pain (and it easy to take something for the pain) and the other because he looked exhausted ... I never thought about the girls or mark ( he wouldn't risk his title at the europeans and he is at the begining of a lot)

So sorry but I don't believe this .. I think it's more to ruin the Eteri's team

Artemisa said:
So sorry but I don't believe this .. I think it's more to ruin the Eteri's team
Click to expand...

You believe this whole thing has been manufactured to hurt Eteri? Really?

None of us know the truth yet, but I seriously doubt this is it.

I was thinking before the Olympics that Kamila should be very careful about who she is around because there are people who would be jealous of her accomplishments. It reminds me a bit of Tonya-Nancy scandal and I think it could be a sabatoge attempt.
S

Without speculating is it too late to sub Liza in if for whatever reason one of three ladies for russia can't skate in the individual event.
You must log in or register to reply here.