Daniil Samsonov | Page 3 | Golden Skate
Menu
Log in
Register
Navigation
Install the app
More options
Contact us
Close Menu
You are using an out of date browser. It may not display this or other websites correctly.
You should upgrade or use an alternative browser.

It seems he will skate at the Denis Ten Memorial Challenge. Would like to know where the entry lists are?

The LOC is probably still finalizing the entries, there are many divisions. And travel arrangements need to be made for the foreign competitors.

Hopefully KAZ federation will keep their event in the ISU calendar and make it a regular worth of attending by skaters from all over the world.

Little Boss Man now has a 4F [emoji1377]
https://www.instagram.com/p/B3d6lqzlUOI/?igshid=r5ynayxtwir4
If he skates clean with this layout I won’t be surprised if it hits 180!

Congratulations to Daniil on his bronze medal at the Youth Olympic Games. I really enjoy his skating. Will post the official videos if they become available.

Pity he wasn't drawn for the team competition.
F

Pity he wasn't drawn for the team competition.
Click to expand...

I'm so excited about the prospect of Daniil smiling on top of the podiums in the future, which I'm sure will happen

Seeing him skate clean is of course such a beautiful and exciting thing, but seeing him completely happy after a performance will be even better

Daniil Samsonov: In the Tutberidze group they say: “We don't jump doubles here”

After the short program, our skaters were in the lead: Andrey Mozalyov had 79.72 points, and Daniil Samsonov had 76.62 points. Japanese Yuma Kagiyama, who had 72.72 points, stepped on their heels. It seemed that gold would not leave us, and one of our skaters would definitely rise to the top step of the podium. Alas, both of our skaters fell in the free program, and this was enough for Kagiyama who skated cleanly, to get around both.

The Japanese performance was the last this evening. When he completed his program, our guys were giving interviews in the mixed zone. And then announced the assessment of Kagiyama. The roar in the palace rose such that there was no doubt - the gold of the Youth Olympics is sent to Japan.

During his interview, Mozalyov glanced at the monitor, where Kagiyama's scores appeared (the Japanese ahead of Andrey by 1.23 points), and barely held back tears from resentment.

- I had mixed feelings: the joy of not performing badly, grief over not winning a medal, it’s sad because I became second, although I wanted to be first,” said Mozalyov. - The key mistake was the fall. On it, I lost much more than two points, which were not enough. I have not yet understood myself why I fell. I seemed to have pushed out, I opened up, and suddenly - I'm lying. Very disappointing. But the final result, it turns out, is fair.

ETERI GEORGIYEVNA KNOWS - I CAN DO MUCH

Samsonov answered questions from television reporters in detail and moved to the written press area. For some reason, no one showed interest in the 14-year-old child prodigy. Therefore, we managed to communicate face-to-face.

-- Did your coach Eteri Tutberidze set you any tasks for these Games?

- Eteri Georgiyevna does not set us a task for every start. She knows that I can do a lot. I set myself the task - to show clean skating. So that they could count on me in the future.

-- As a result, you are the third, Andrey - the second. How do you rate your performance and how can you characterize Yuma Kagiyama?

- A good incentive to strive for first place, to always cleanly skate out programs. And Yuma - well done, during the short he did not calculate a jump and flew off into the boards, but he gathered himself for his free and skated cleanly.

-- You fell almost at the very beginning of your program. Very upset at this moment?

- Immediately I tried to get myself together and decided to rebuild the program a bit to win back the points that I lost in the fall. And, frankly, I did not worry much. One must always fight to the end.

-- Does Daniil Gleikhengauz stage programs for you?

- Daniil Markovich played a big role in my life. Thanks to him, I ended up in a group with Eteri Georgiyevna. He stages the programs, but not only to me, but to our entire group. Daniil Markovich also wants me to show clean skating, because he knows that I can do everything.

I SAW THIS HUGE PALACE, I WANTED TO SHINE

-- Remember your first training in the Tutberidze group?

- They met me well. At the very first training session, I tried to show my entire technical set, jumped doubles, which I only knew how to jump then. But they told me: “We don't jump doubles here, only triples.”

-- How much time did it take you to master triple jumps?

- I came in March, and after summer training I already mastered the triples.

- No. But, I think, she was pleased with my progress.

-- She is very strict. Are you afraid of her?

- I was afraid for the first days, then I got used to it. And the guys supported me, they said: "Do not be afraid, everything will be fine." Eteri Georgiyevna is not strict, she is demanding. She wants us to show our maximum.

-- During the European Championship in Moscow in 2018, Tutberidze put you up for demonstration performances. Did your knees tremble when you first came out in front of the full stands of this grand palace?

- I saw a huge hall full of spectators, and I just wanted to shine in my performance. I really liked how the audience supported me.

-- Before the New Year 2019, a video appeared on the Web with you jumping quads in training. The clip had some impact. What was the reaction of your friends and acquaintances?

- Friends wrote to me - well done. And there was nothing else like that.

-- Which of the girls in your group communicate best with?

- I can’t single out someone, we all communicate well in our group. And I have close friends outside the ice.
-----
From: https://www.sovsport.ru/figure/articles/2:930636

Second in SP, second in the free, but first at the end. Junior russiasn champion for the second time :agree:

Daniil with other boys from the team:
https://www.instagram.com/p/CDWXON4JEg_/

Daniil not left abandoned by his fan group.
An interview is expected and looked forwards to.

This is such a funny photo...

Danya with Seva and Mark at draws for junior nationals (3rd picture):

Daniil spoke about the Osgood-Schlatter (text in russian and english):

So I was thinking if it was a doll that he got from a fan and looks like indeed it is a doll... 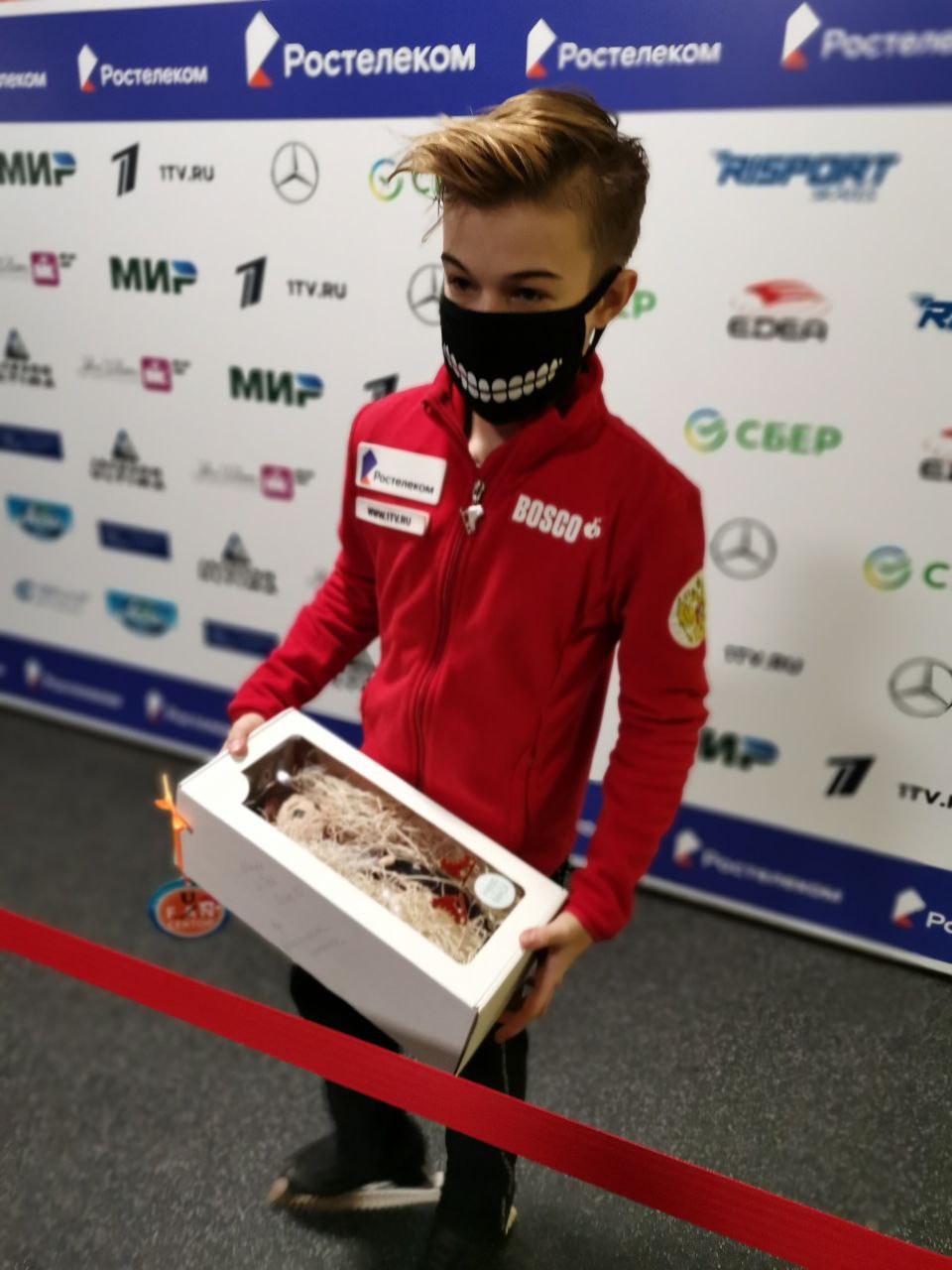 Daniil Samsonov wrote very nice and mature words on his first appearance in a competition in a year:

(Google translate) This period without competition was very difficult, of course not everything worked out, but we will get better I would like to sincerely apologize to viewers and fans for the fact that "the first pancake turned out to be lumpy." I want to say a huge thank you to all those who helped and helps me to go through this difficult path without losing faith in me

I want to say a special thank you to Daniil Markovich and Sergey Viktorovich for being with me at these competitions and finding the strength to support me. Eteri Georgievna thanks for all the advice and guidance We work further.
Last edited: Feb 5, 2021
You must log in or register to reply here.