Good Vibrations (2012) | Golden Skate
Menu
Log in
Register
Navigation
Install the app
More options
Contact us
Close Menu
You are using an out of date browser. It may not display this or other websites correctly.
You should upgrade or use an alternative browser. 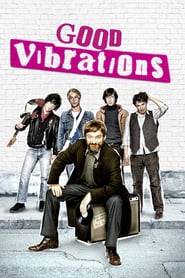 
Tagline: Are teenage dreams so hard to beat?

Plot: The story of music legend Terri Hooley, a key figure in Belfast's punk rock scene. Hooley founded the Good Vibrations store from which a record label sprung, representing bands such as The Undertones, Rudi and The Outcasts.

Finally watched this film last night, and absolutely loved it!!!

Although a lot of you won't have heard of him, Terri Hooley is an absolute legend of the music industry here in Northern Ireland. This film is a dramatisation of his story.

At the height of The Troubles, he decided to open a record shop (called Good Vibrations) on Great Victoria Street, one of the main streets in the heart of Belfast. Now, for those of you that are unfamiliar with Belfast geography, also on Great Victoria Street is the Europa Hotel, which is famous for being the most bombed hotel in Europe. So, this gives you an idea of the risk he was taking.

From this, he got into music management, and single handedly made Belfast the centre of the Punk Rock universe. All while The Troubles were going on around him.

Terri was brilliantly played by Portadown actor Richard Dormer. Now, because of my age, I mainly know Terri as an older man. So, it was fascinating to get an idea of what Terri was like in his younger days.

Terri's wife was played by Jodie Whittaker (yes, the same one that is currently playing Dr. Who!) I have to be honest, I didn't recognise her with a long dark hair and a broad Belfast accent. It was a real shock when I saw the credits and saw who played Ruth. To the extent that I wound back to have a good look at her. And it was her face alright! For somebody who does not have any family connections to Northern Ireland, her accent was really convincing. I would have sworn that it was a local actress.

Somebody who I did recognise despite them having long dark hair was Enniskillen actor Adrian Dunbar. His role was relatively small. And I have to admit, given that he does have a background in music, I was disappointed that he didn't have a singing part.

My jaw dropped when I saw the guy playing Feargal Sharky (Bangor actor Kerr Logan). He looked so much like Feargal that it was scary! That said, we didn't get to see much of him. Although Terri is most famous for bringing The Undertones to the outside world, the band only featured briefly in this film. The focus was more on Terri's other acts, particularly bands Rudi and The Outcasts.

Naturally, there was a lot of music featured during the film. And I have to admit, it did surprise me just how many of the songs I knew!

As somebody who was growing up during the final decade or so of The Troubles, the backdrop of the film brought back a lot of memories. Wee details that I had fogotten, like the fortifications built around pubs. (I remembered them around buildings connected with the state, such as police stations, courthouses, benefits offices, etc. But I forgot that they were around pubs too).

And seeing again the way things used to be made me realise that this is probably why we in Northern Ireland are broadly more accepting than other places of the restrictions that have been brought in to combat COVID-19. Because we were used to living under the restrictions that were in place during the bad old days. So, we have just flicked a switch and reverted back to our old habits.

Getting back to Terri Hooley, I remember when the Good Vibrations record shop finally closed in 2015. It was a big story in the news over here, because it truly was the end of an era.

Here is how it was reported in the Belfast Telegraph:

As for the film, I would definitely recommend it. Whether you are a music lover, or somebody who is interested in Northern Ireland during The Troubles, or you just like films with a feel good story. This film has everything.

A fitting tribute to a true legend.