Irina Slutskaya | Golden Skate
Menu
Log in
Register
Navigation
Install the app
More options
Contact us
Close Menu
You are using an out of date browser. It may not display this or other websites correctly.
You should upgrade or use an alternative browser. 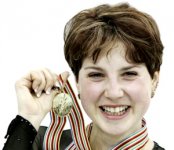 Slutskaya, known for her athletic ability, was the first female skater to land a triple Lutz-triple loop combination (2000 Grand Prix Final). She is also known for her trademark double Biellmann spin with a foot change, which she also invented. She was the first Russian lady to ever win the European title and currently holds the record of seven. Slutskaya is generally considered to be one of the most successful ladies' singles skaters in Russian history. She retired in April 2007.

2014 - Professional
We are the Champions (Fire Within by Birdy)

2004–2005
SP: Ballet Suite No. 5 (from The Bolt) by Dmitri Shostakovich
FS: Croatian Rhapsody by Maksim Mrvica / Whisper From the Mirror by Keiko Matsui / Wonderland by Tonči Huljić performed by Maksim Mrvica
EXH: It Must Have Been Love / Catwoman

How great. She was the next on my great retired list whose fan fest I was going to open. I really liked her and I was moved by her tears of disappointment in Salt Lake City.

As I've often mentioned one of my enduring memories of the Olympics and skating is her in her unitard with the golden sun detail on it. I thought it was so cool

She's also be doing a lot of stuff lately with Russians with disabilities. Nice.

I am so happy to see Irons has a fan fest now!

She radiated such energy and joy when she skated!

I always liked Irina! I remember fondly the competitions with Irina, Sasha and Michelle, they dominated the Ladies
back in the day!

I've just added a detailed results table with the links to almost all the competitions.
A

Congratulations to Irina!
You must log in or register to reply here.