After Chubu SP he tweeted:
“I’ve been wearing a face mask hiding my sour face [laughter]
But, what a joy it is to be able to compete at an event.
I feel fine competing without spectators, as TP is like this [laughter].” (t/n: I searched the net but could not figure out what TP is. I’m guessing it means a test skate behind closed doors.)

Before Chubu FS he tweeted.
“I’m feeling a little unsettled in my iffy state of after competition and still before competition [laughter].
I want to relax today and devote myself to FOD and the last performance (FS).
Thanks to my part time job (t/n: at Howa), I have strong feelings about this event [laughs].
Good luck, everybody!” 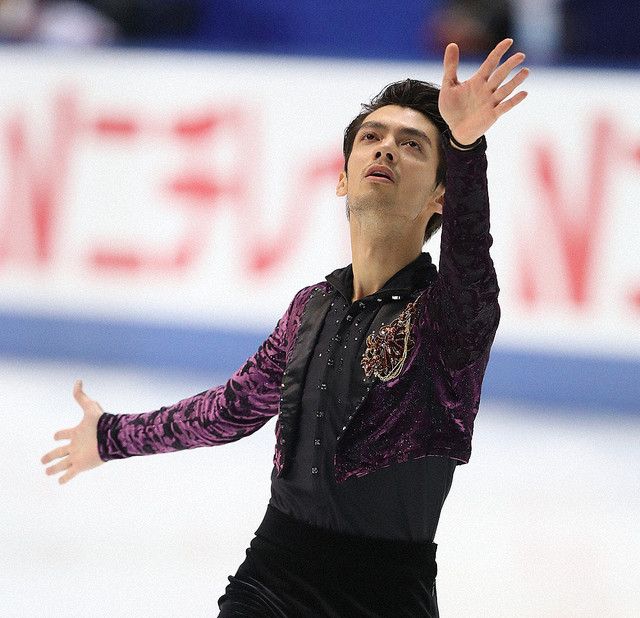 news.livedoor.com
Is Ryuju saying he plans to retire this season or the next? I suspected he would but still. -_- I hope he can still skate to Gettysburg as he wanted but the article is saying something about keeping the FS if he decides to compete?
R

surimi said:
Is Ryuju saying he plans to retire this season or the next? I suspected he would but still. -_- I hope he can still skate to Gettysburg as he wanted but the article is saying something about keeping the FS if he decides to compete?
Click to expand...

Translation of the above article:

His free program this season is the soundtrack of “The Truman Show.” He chose this piece as his last FS music. “I will retire after this season or next season; either way I will keep this free program,” he expressed his intention of retirement.

When asked why he started to think about retirement, he noted “Maybe fatigue. Since novice days I have been working hard at practice and competitions. For about 20 years I have been doing figure skating every day. I’ve seen almost all skaters my age and younger quit skating at the time of graduating from college, and I feel lonelier than ever being left out. I feel I’ve reached the limit of my physical strength. I told myself this would be my last, and the best I can do is to continue working hard for one or two more years, since I am nearly at the end of my rope, physically and mentally.

This competition has spectators. At the end of this online interview, he expressed his strong feelings for his fans. “Thank you very much for cheering for me for many years. When I got notified of Japan Open, I seriously asked them ‘Huh??, What am I supposed to do??’ I had never imagined myself being a participant. When I was told that I could skate there, I was really surprised and happy as well. Now that I will skate on such a big stage, I have to give a 100 percent, 120 percent. I’ve been preparing for that, and I will give my all until the end, whether my jumps fail or not. I would appreciate your support,” he spoke his enthusiasm.

Here's Ryuju's JO protocol: https://jsfresults.com/InterNational/2020-2021/japanopen/data0105.pdf
He did fall, 3 times, the poor thing, but I hope he was true to his word and gave it his all, and hopefully enjoyed it. Now that he is preparing to take his bows in a year or two, some falls don't really matter (as long as he doesn't get hurt). They are not what his fans remember, and I hope he knows that. I feel so sorry to hear he's so exhausted in body and mind.
Any videos? I cannot find either the FP or the gala :[
R

Ryuju tweeted after JO and CaOI: https://twitter.com/Vnagar_juna/status/1312693909009518592/photo/1 (Chukyo skaters posing with fingers making the "C" shape.)
"I'll do my best to fix the issues I've found this time by the Western Sectionals so that I can step up my performance. These five skaters are particularly tired! (lol)" <--- They skated at JO & CaoI one week after the Chubu regionals.
Last edited: Oct 6, 2020

Ryuju is in 4th after the SP. He received a score of 71.75. I couldn't find a video, but here are at least his thoughts: https://www.sponichi.co.jp/sports/news/2020/10/30/kiji/20201030s00079000218000c.html
He says 「もう少し高いレベルの構成でやりたかった」と振り返った日野だが、「6分間練習で、ちょっと無理そうでレベルを落とした。ジャンプで大きなミスなく終われた」Wildly guessing with google translate's help, he says he wanted a higher level for his program, but in the warmup he couldn't perform it, so he decided to lower the level, and finished without a major mistake in the jump passes?
Pity people are not uploading Ryuju, I would really like to see this SP. Especially since the article mentions he wants to retire this season or the next.

Ryuju's free skate: https://www.youtube.com/watch?v=EdTENTNMBG4
He finished 5th with a score of 199.45. Here are his thoughts: https://news.yahoo.co.jp/articles/554e425b28b91b819bcb69b4f45785448f840b23 (in Japanese) Does it say anywhere when exactly he is planning to retire? It sounds like it is this season, presumably after Japan Championships?
It's a pity because I find his FS especially, quite nice to watch. It's such a peaceful tune, it makes me calm to watch him skate to it. And he does a good job, too. There was one fall which looked painful, but apart from that I really enjoyed the program. I think he hasn't been this clean for a couple of seasons?
ETA, his latest tweet leaves me puzzled though. What does he mean? and I had no idea one can use tabun at the end of a sentence... I see my textbooks are woefully inadequate...
Last edited: Oct 31, 2020
R

surimi said:
He says 「もう少し高いレベルの構成でやりたかった」と振り返った日野だが、「6分間練習で、ちょっと無理そうでレベルを落とした。ジャンプで大きなミスなく終われた」Wildly guessing with google translate's help, he says he wanted a higher level for his program, but in the warmup he couldn't perform it, so he decided to lower the level, and finished without a major mistake in the jump passes?
Click to expand...

He said he paid attention to details and did not attempt a quad aiming for clean skate.
His overall skate was solid except for the 3A fall and he got level 4 on all his spins. Weighing the positive outcomes and issues to resolve, he said “I feel that my moves should have been a little faster, so I want to prepare for the Nationals aiming for well-balanced skate.”

His goal at the Western sectionals was to be on the podium. “Of course, I wanted to take at least 3rd place. When I learned other skaters’ scores I felt that I had a shot at the podium finish, but I guess today was not my day. It happened.” He commented calmly.

He will enter the Japanese Nationals in December for 12 years in a row. He said, “I’m simply glad I can compete there again. My 10th time (14th place) and 11th time (13th place) didn’t produce desired results so I want to redeem myself this year,” he said and announced that his goal is to be in the top 10.

Recently he has changed his practices schedule from 4-5 days to 6 days a week. He noted, “I get tired if I keep this schedule and it may be better to take a little rest in between. It is hard to find the balance, but this competition made me realize that too much practice is not good.”
R

About his latest twee, he said
何か今日妙に難しかった笑
良かったところも多分。。ある。笑
I feel like things were strangely hard today (LOL)
There are something good (in my skate) ... perhaps. (LOL)
You must log in or register to reply here.