Schitt's Creek | Golden Skate
Menu
Log in
Register
Navigation
Install the app
More options
Contact us
Close Menu
You are using an out of date browser. It may not display this or other websites correctly.
You should upgrade or use an alternative browser. 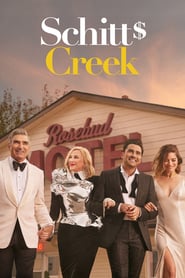 I absolutely fell madly in love with this show. First few episodes I was a bit unsure when I first started watching it and after that I was hooked. OH MY GOD!!! I CANT BELIEVE ITS OVER!!!! 6 SEASONS!! not nearly enough for this show. I can't even believe its a Canadian show. Nothing this good has come from Candian comedy shows in as long as I can remember. For those of you who are not aware of the show.. You can watch it on Netflix, or on Pop Tv in the US or CBC in Canada. It won Emmy nominations and awards. The cast is probably the best cast you can ask for to play their own characters. The mother Moira Rose is played by Catherine O'hara (mom in Home Alone series) and actually won the Emmy for " Best Performance by an Actress in a Continuing Leading Comedic Role" on the show. Dad is Johnny Rose played by Eugene Levy (dad in American Pie), their son Daniel Levy is David Rose in the show, the daughter in the show is Alexis Rose played by Annie Murphy (HILARIOUS rich girl diva spoiled attitude), Davids best friend Stevie Budd is played by Emily Hampshire, Jocelyn Schitt (mayors wife..who is one of my favourite characters) is played by Jenn Robertson, Jocelyn's husband and mayor of Schitts Creek is Roland Schitt played by Chris Elliot, Twyla Sands is the cafe employee and all around sparkle of joy in the show is played by Eugene's real life daughter and Daniel's sister; Sarah Levy.

Basic plot of the show is the Rose family is a rich family living in the US who loses everything and is placed in a town in Ontario called Schitt's Creek that they bought as a joke years ago and hold the deed to. They end up living in the towns motel with adjoining rooms. Davis and Alexis The characters are just so funny, each one so different and they just blend so incredibly well. The humor is literally laugh out loud. They give you time to comprehend what was just said too.. its very well timed. The wardrobe, specifically for Moira Rose is just out of this world. Oh my gosh.. I cant tell you how many time I've just laughed at the outfits she puts on. The show is able to take real life issues and play them out as a family may play them out. Its not in your face but more just wound in the shows plots. I wont spoil anything for you if you haven't seen it but I will definitely say stop reading here because I guarantee comments below will spoil things for you.

this show is SO funny! i absolutely love the sarcastic humor. David is my spirit animal.

i also had no idea this was a family affair! how cool. i literally had no idea Twyla and David are brother/sister in real life and are the kids of Johnny. i only wish Moira was their real mom now!

Yah!! it really is!! its definitely a special show in that way, it was all family produced etc. A fantastic achievement. Shows like this do not come very often. And to find people that play their parts all so incredibly well.

jersey1302 said:
Yah!! it really is!! its definitely a special show in that way, it was all family produced etc. A fantastic achievement. Shows like this do not come very often. And to find people that play their parts all so incredibly well.
Click to expand...

i think Catherine O'Hara deserves an award for playing Moira (an Emmy, is it?) this is the only role she's played that makes me forget she's Kevin's mom in Home Alone, as that's how i've always identified/remembered her. no one else could have played Moira like her, she fits that role like a glove!

macy said:
i think Catherine O'Hara deserves an award for playing Moira (an Emmy, is it?) this is the only role she's played that makes me forget she's Kevin's mom in Home Alone, as that's how i've always identified/remembered her. no one else could have played Moira like her, she fits that role like a glove!
Click to expand...

10000% Agreed. She was nominated in 19 for primetime emmy outstanding lead actress in a comedy series but didnt win.

Has anyone seen the 6th season? Its out on Netflix. I had PVR'd it on TV so I watched it prior to the netflix release. UGH THEY NEED TO DO MORE SEASONS!!!

And how about them at the Emmy Awards.. First show ever to sweep the category they were in. They won every single Emmy they were nominated for in the prime time award show including Best Comedy Series ( they beat Modern Family and a whole load of others) Best actor, actress, supporting actor/actress, costume, writers.. I think I am missing a few. What is even crazier is its Canadian. No Canadian show has ever done this before
S

Thanks for the synopsis. With hardly any skating to watch, I'm going to need to immerse myself in something else in order to get through the winter. This show sounds promising.

I too love this show! I'm saving the last season for a rainy day!

Just fold in the cheese. LOL

Moira - "Turtles pets do not make!"

TV show information provided by The Movie Database
You must log in or register to reply here.