Tiny Pretty Things | Golden Skate
Menu
Log in
Register
Navigation
Install the app
More options
Contact us
Close Menu
You are using an out of date browser. It may not display this or other websites correctly.
You should upgrade or use an alternative browser. 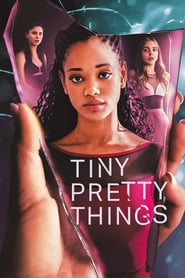 Overview: When an attack brings down the star student at an elite ballet school, her replacement enters a world of lies, betrayal -- and cutthroat competition.

This came up in my Netflix recommendations today. It is apparently some kind of unsolved murder mystery/thriller taking place in a ballet school setting. Might be worth to check out if you are into these things (ballet and mysteries), I'll definitely give it a try!

I watched it and am of the few who actually liked it overall:

I loved the cast diversity. I think it tackled the issue of racial tokenism (when a school uses a black student to promote they're sO dIvErSe) very well which is something I've noticed rarely gets talked about. And the guy who had the southern accent (forget his name) making all the racial stereotypes is something that I also often see not talked about (especially in the dance world). I'm surprised they didn't mention the skin-tone tights and pointe shoe issue with such a diverse cast.

While I'm glad they had a male with an eating disorder (instead of it being a rich white female ballerina it's a rich white male ballerina omg so progressive) they made it his only personality trait for over half the show and then it just disappeared. And when he fainted (or literally any medical issue, such as Bette's foot) where was literally any adult to be like "hey are you okay?" For Oren it was only his friends that happened to find him freakin passed out on a bench. For Bette it was only Oren and then her new boyfriend. IDK if either of them were my friends and I found out they'd get a hell of a lot more help than "are you okay haha?" Especially when it got so bad Bette couldn't really walk well.

Professional ballet dancer, Tristan Simpson, has a video about the accuracy of the ballet terms:

https://www.youtube.com/watch?v=kLuQBG1ch80
I think it's important to note that this isn't a ballet documentary. It's a mystery/drama show that happens to take place at a ballet school. The ballet is not going to be accurate because that's not the point. It reminded me of Spinning Out where the skating wasn't the main plot line; her Bipolar was.

Overall: Skins + Pretty Little Liars + Dance Academy = Tiny Pretty Things, in my opinion.
TV show information provided by The Movie Database
You must log in or register to reply here.