Zen | Golden Skate
Menu
Log in
Register
Navigation
Install the app
More options
Contact us
Close Menu
You are using an out of date browser. It may not display this or other websites correctly.
You should upgrade or use an alternative browser. 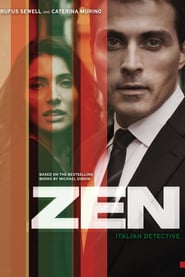 Overview: Zen is a British television mini series produced by Left Bank Pictures for the BBC, co-produced with WGBH Boston for its Masterpiece anthology series, Mediaset and ZDF. It stars Rufus Sewell and Caterina Murino and is based on the Aurelio Zen detective novels by Michael Dibdin. The series was filmed on location in Italy, but the dialogue is in English. The series, which comprises three 90-minute films, was broadcast in the United Kingdom on Sunday evenings from 2 January 2011 on BBC One. The three films were based on the books Vendetta, Cabal and Ratking.

I love everything with Rufus Sewell

I read most of Dibdin’s novels; the TV adaptations are, to my mind, better than the books. Likely this series is possibly the best work Rufus Sewell has done but it was cancelled by the network!! Go figure.. Rufus just shines as Aurelio Zen who hails from Venice - hence his name - which is treated like an alien land by the Romans and the rest of Italy. Police detective Zen has a impeccable reputation for honesty - “.. a vicious slur..” his boss chides - in an otherwise corrupt institution. The only other Dibdon novel I would have liked to see on film is Dead Lagoon which returns Zen to Venice, his boyhood home... in the dead of winter, a gothic but no less romantic landscape.
A

gsk8 said:
I love everything with Rufus Sewell
Click to expand...