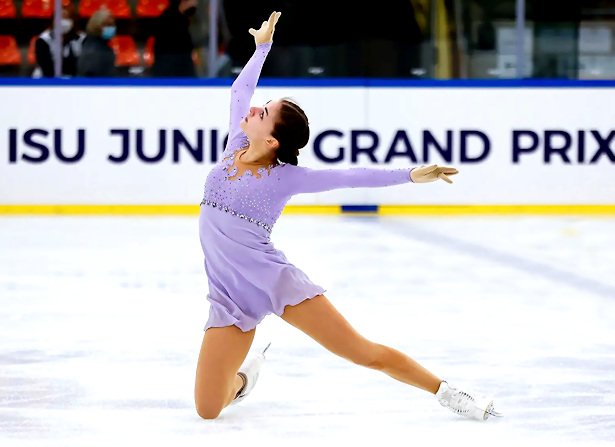 Ukraine’s Mariia Andriichuk performs her Free Skate at 2021 Cup of Austria in Linz.

As of Aug 24, 2022, the Office of the UN High Commissioner for Human Rights (OHCHR) recorded 13,718 civilian casualties in the country: 5,587 killed – including 362 children – and 7,890 injured. OHCHR notes that the actual figures are likely considerably higher. In addition, over 6.6 million people remain displaced by the war. The estimated number of internally displaced
persons in Ukraine has increased from 6.645 million to 6.975 million.

Mariia Andriichuk, the 2021 Ukrainian National bronze medalist in figure skating, was asleep at home in Bila Tserkva — a city 50 miles south of Kyiv — when the invasion began.

“It all started at about five in the morning,” she recalled. “At first I didn’t understand what had happened and I still wanted to sleep, because I had to train in the morning. But then my parents told me to pack my bags to leave the city to a safer place until we could figure out what to do.”

Andriichuk, who was 17 at the time, left for Hungary with her mother, brother, aunt, and 6-year-old cousin.

“We got there by train,” said the 18-year-old. “It was very difficult under the sirens and stops. We slept in the aisle because there were eight people in each compartment. First, we went by train to Uzhhorod, stayed there for the night, and then crossed the border on foot. In Uzhgorod, we stayed with friends for one Sunday and then my mother and I went to Debrecen. I trained there for a a month while we decided what to do next. A few weeks later my coach, Vadym Chestakhovskyi, arrived and we found an arena in Riga, Latvia, and went there.”

All of her family members are back in Ukraine, with the exception of her sister, working. At first, the skater trained at the Kristal Ice Club, but now she and the rest of the team under Chestakhovskyi are training in Mārupe. She is very thankful for the some of the free time and discounts she received in Debrecen and the Kristal Ice Club. As a result, Andriichuk feels she has been able to “restore” all the elements she had prior to the war.

“I find solace in training,” said Andriichuk. “Sometimes I like to draw, but training is where I find a bit of peace for myself.”

“I am always improving my skating skills and learning new elements,” she said. “I feel I have improved on the jumps and spins and have become more consistent with my triple-Lutz-Eueler-triple Salchow, triple Lutz-triple toe and triple flip-triple Salchow combinations.”

This season, the skater is keeping her short program from last year to “Caught Out in the Rain” by Beth Hart. Her new free skate is a lyrical piece to “On the Waves” by Evgeny Grinko. The free skate was choreographed by Chestakhovskyi, while the short program was put together by both Chestakhovskyi and Mark Nechiporenko.

“My coach found this music by accident,” said Andriichuk said of her free skate. “We listened to it and we both liked it. At first, I tried to skate my old free program layout to this music. I performed a trial program at the Kurbada Cup in April of this year and my coach and I liked it. Ultimately, we decided to do a new layout. I really like the flow of the music which allows for nice hand movements and steps!”

Andriichuk debuted on the Junior Grand Prix last season, competing at both Ljubljana, Slovenia, and Linz, Austria. This season she will be making her international senior debut in the Challenger Series at Finlandia Trophy later this fall.