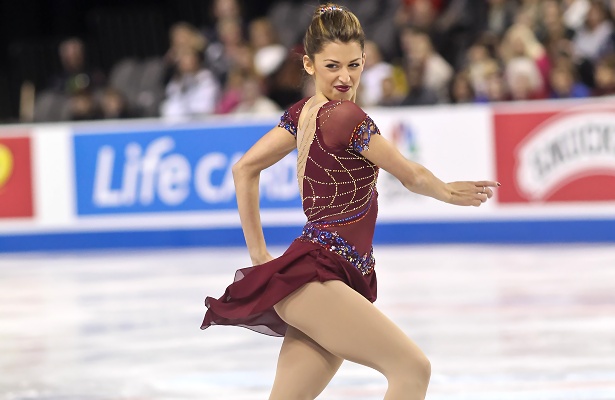 USA’s Samantha Cesario recently finished fourth at 2014 Skate America—her first Grand Prix event of the season. She was fifth at the same event last year, when she debuted as a senior on the circuit.

“I am very happy with the way I skated and how I fought for everything,” she said. “I do realize that my spin and footwork levels need a lot of improvement, and I know I lost a lot of points there. I thought some of my component scores could’ve been a little higher, however, this is figure skating and I try to only focus on what I can control.”

“These were my first competitions of the season, and I think the main goal was to get two good programs out there and see what feedback I would get,” said Cesario. “I was happy with my free skates in both of those events. After Finlandia, I got a lot of constructive criticism on my short program and I tried to apply it the best I could for Skate America one week later.”

The skater definitely feels the changes she made were a big improvement, and is happy with how her season is going so far.

“I think each time you go to an event you gain more experience in front of a different crowd and panel of judges,” she noted. “I always try to apply whatever feedback I get for my next event, and continue to improve each time I step on the ice.”

Cesario’s main goal for this season is to increase her technical capabilities and become more consistent with her triple-triple in both programs. She is using a triple flip-triple loop in the short, and a triple loop-half loop-triple Salchow for the long.

“Due to the struggle I face with my knees and the direction of my landing edge, adding a triple toe to the end of another jump is extremely difficult for me,” the 2013 U.S. Classic bronze medalist explained. “I have worked very hard on the triple flip-triple loop combo, and hope to have that in the free eventually as well, but the loop-Salchow is a strong three jump combo that I feel very confident in.”

Cesario, who was diagnosed with mononucleosis in May and lost two months of training, is also aiming for a top three finish at the US Championships, as well as a Grand Prix medal this season.

“I started skating again in July, and it definitely had a big impact on my training over the summer,” she said. “For the next month or so, I was completely exhausted on the ice, and it made pushing through programs a nightmare for me. Luckily, in August, I started to feel more like myself.”

Although Cesario has a bad facet joint that has given her a lot of trouble in the past, she is no longer in any serious pain, and is working on getting her levels up on her layback spins in both routines.

“To be honest, I’ve been feeling really good and I’m just really trying to work on increasing the overall speed of my layback spin,” she explained. “The addition of the difficult entry feature has been a big help to me and makes it possible for me to get a level 4 without forcing me to hold any one position for eight [revolutions]. I hope to achieve that level at my next event.”

The skater, who earned a new personal best in her Short Program and Total Score at Skate America, has been steadily improving since last season.

This season, the Finlandia silver medalist is skating to “Danza Mora” by Dr. Samy Farag for the short program, and is keeping last year’s long to Carmen. Both routines were choreographed by Inese Bucevica.

Cesario wanted something “ethnic” for her short program that would be enjoyable and entertaining, yet show a more mature side to her skating.

“We are going for a Moroccan feel with this program, and I think each time I go out, the character develops even more,” she said. “It’s definitely something new for me, but I think it challenges me and will develop into a really fun program as the season progresses.”

It was an easy decision for the skater, who is coached by Mary Lynn Geldermann, to stay with Carmen for another season.

“I felt a strong connection with the music, and I felt like I could really develop the character even more,” explained Cesario. “I know many skating fans think Carmen is overused, but I think it’s a really classic piece of music that I hope I can bring a fresh flavor to.”

“I don’t want to just skate to Carmen like everyone else,” she added. “I hope the audience can really see me as ‘Carmen’ and believe the story I am trying to tell.”

The three-time Junior Grand Prix bronze medalist made several changes to the routine, especially in the middle section.

“I really wanted to take a moment in the middle of the free to stop the crowd and make them fully appreciate the music and the character,” explained Cesario. “I felt like last season the middle of the program got a bit slow and boring, so I wanted to add some classic Carmen flavor to this section.”

Cesario does not plan on making any significant changes in her programs prior to her next event at Trophée Éric Bompard in Bordeaux, France, but would like to get her spin and footwork levels up.

“I have had some pain in my ankle and I’m hoping to clear that up so I can really work hard on picking up speed in the spins and making sure I get the levels,” she said. “I will also continue pounding the triple-triple combos so that I have even more confidence in them the next time I go out. I would love to earn a medal in France, but I really want to just focus on clean skates and making every element count.”

It is not lost on Cesario that she will be competing again alongside two-time and current World Junior champion Elena Radionova, as well as 2014 World silver medalist Julia Lipnitskaya (RUS), and teammate Ashley Wagner—who took second at 2014 Skate Canada.

“I think Trophée Bompard is going to be a really great event,” said Cesario. “Every Grand Prix has an extremely high level of skating, and I realize the competition in France will be no different.”

“I have always been the kind of skater that thrives on competition and really enjoys the whole atmosphere, she pointed out. “I set high expectations for myself and I try to accomplish the personal skating goals I set for each event, regardless of who I am competing against. I want to focus on improving upon what I have done so far this season and continue to push myself to be the best I can be.”

Over the summer, the skater from Oceanside, NY, moved to a new training facility called Twin Rinks in East Meadow that is only 20 minutes from her home.

“It is a beautiful new building with two ice surfaces as well as an additional recreational outdoor rink,” said Cesario, who trains on ice three hours a day and five days a week. “I also started a new off-ice training program designed to help me build the strength I need to complete the harder elements I have been working on. It is very different from what I am used to, and I’m hoping it gives me the edge I need to get me to the top.”