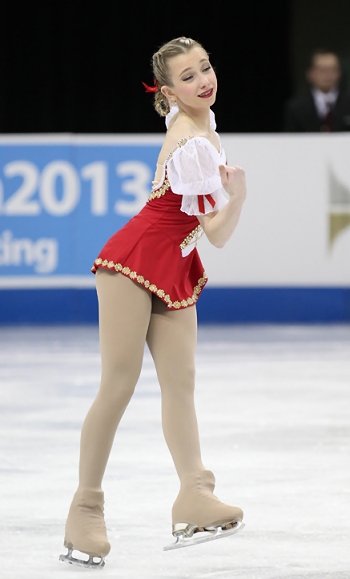 Tyler Pierce performs her Long Program at the 2013 US National Figure Skating Championships.

Tyler Pierce, a 14-year-old blonde pistol of a performer, ran away with the Novice Ladies title at the 2013 Prudential U.S. National Figure Skating Championships, maintaining her lead after yesterday’s short program.

“I feel amazing,” she said after the competition. “It’s so exciting.”

The Norco, Calif., native landed two clean triple jumps and a double Axel-double Axel sequence in her “Korobushka” program, and scored a total of 128.96 points in the competition.

“I really focused on my skating today, and tried my best to do all of my jumps,” Pierce explained. “I got a little swing on some of my jumps, and didn’t stick with the landings on some of them, but overall I think that I was able to do well.”

Pierce earned a level four on her closing flying camel spin, and garnered a level three on her other spins in in the program. She was especially excited to share the podium with her training mate and friend, Amy Lin, who captured the silver medal behind her.

“I’m so thrilled and honored to be here, and I’m thrilled to have my friend standing beside me on the podium, too,” she said with a big smile.

Lin, from Fremont, Calif., missed qualifying for last year’s championships, and was thankful for the opportunity to redeem herself after that disappointment.

“I’m thinking that it hasn’t just been that it’s the physical side of my skating that has progressed this year, it’s the mental side, too,” Lin admitted. “The outlook that I have on skating has changed. It’s more positive, and I know how to focus when I jump and move on to the next one even if I have a mistake.”

Lin opened her Spirited Away program with a triple Lutz—her first in competition, and landed three clean triple jumps in all. Her total of 126.57 is a new personal best, a fact that was not lost on the 13-year-old.

“This is my first time doing the triple Lutz in competition, and I’m very happy to include it,” she said. “Even though I left out some of my combinations, I’m happy with my score, and happy to have skated two good programs.”

Finishing in third place and winning the bronze medal was 14-year-old Bradie Tennell, from Carpentersville, Ill.

“Well I didn’t really expect (to win a medal), because I only have the first two triples, and there are kids here that had all of them,” she said.

Skating to music from The Nutcracker, Tennell opened with a triple Salchow, but then fell on a triple toe loop attempt.

“I thought it was going very well. After I fell, I knew that I just had to move on and not get hung up on it,” she said. “It was kind of a blur after that, but the second toe (loop) was really good because I have been having trouble with that.”

Tennell landed three triple jumps in all, scoring a total of 116.91 points in the competition. Though she was fourth in the free skate, she was able to hold off the pewter medalist, Morgan Flood, by more than four points.

Elizabeth Nguyen, 13, who trains with Pierce and Lin, finished in fifth place, while 15-year-old Emily Mei-Lin Chan finished in sixth.