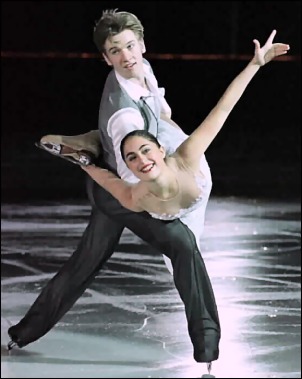 The 2002 U. S. junior ice dance champions are Loren Galler-Rabinowitz and David Mitchell, who represent the Skating Club of Boston. The talented dancers, who are in their fourth season together, have been moving steadily up the ranks, winning the novice dance title in 2000 and finishing fifth in juniors last year.

This season, the duo also won the Joe Carrol Trophy in junior dance at the Lake Placid Dance Competition, the Eastern Sectional Championships, and their first international dance competition at the North American Challenge in Canada. They competed in the Junior Grand Prix series, but were restricted by the September 11 tragedy from completing a full Junior Grand Prix season last fall. They represented the U.S. at the 2002 Junior Worlds in Hamar, Norway in March, where they finished in twelfth place. The couple hopes to compete at the Olympics and Worlds.

Loren and David are coached by Barret Brown, Tom Lescinski and Karen Cullinan. They are very involved in choosing their own music and in the choreography. They both love many kinds of music, especially classical and Latin. The dancers really liked learning Flamenco this year and working with a flamenco artist on perfecting the style in their original dance. This year they are skating to “Seduction” by Oscar Lopez for their original dance and Prokofiev’s “Cinderella” for the free dance. This is Loren favorite fairy tale, and, like Cinderella, she has two sisters, who also skate.

Loren started skating when she was only two. “My mother skated and I just loved watching her,” she said. I started dance when I was nine and loved it.” David didn’t begin skating until he was eight. “I was always stranded at the rink while my sister, Kristen, skated,” he said, “so I started in basic skills lessons and kept on going. I competed in freestyle up through the novice level, but I enjoy competing dance more than freestyle.” He has since passed his Gold Test in freestyle. David began dancing at ten. He admires Jayne Torvill and Christopher Dean because they were so inventive, while she prefers Shae Lynn Bourne and Victor Kraatz for their athleticism and originality.

Loren and David start at five in the morning and train for about four hours a day on ice and seven hours a week off ice during the school year. They increase their practice time during the summer. Off ice conditioning includes strength training and balletics. Loren started ballet when she was four and danced with the Boston Ballet School for three years, but had to choose between ballet and skating. “I still take private ballet lessons,” she added. Loren’s other sports interests include swimming and tennis, while David leans towards football and golf.

Both of the dancers are talented musicians who play the piano. Loren is something of a prodigy, who began playing when she was only ten months old and won the Massachusetts state piano competition in the junior high division. She has continued with formal lessons and is still competing and performing on a regular basis. David has taken lessons since he was six and has won many awards for his playing ability since then. Both listen to music in their spare time, but don’t have any particular favorites.

Lack of time prevents the pair from having too many other off ice activities, but David busies himself as an executive officer in his fraternity, Delta Tau Delta. Loren enjoys painting, pottery, writing poetry and spending time with friends. David hopes to go to China one day to see the Great Wall. Loren likes to go to the beach. Her favorite vacation spot is her family’s house in the Barbados, where her mother has a research program.

Both of the skaters are full time students and are doing well in their studies. David is a sophomore in the honors program at Tufts University and is majoring in political science and Russian studies. Loren is a sophomore at the Buckingham, Brown and Nichols School in Cambridge, MA and is an honors student. Last May, she received the headmaster’s prize for academic excellence at the Park School. She hopes to attend one of the Ivy League colleges and medical school to study for an academic career in fetal cardiology. She wants to work with underserved populations in developing countries.