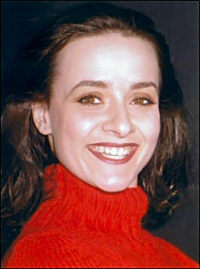 Ice dancing coach Irina Romanova teaches with her husband Igor Yaroshenko at the Skating Club of Wilmington in Delaware.

Tired of seeing some of the overblown and sometimes hideous costumes on ice dancers? So is ice dancing coach Irina Romanova, who teaches with her husband Igor Yaroshenko at the Skating Club of Wilmington in Delaware. But unlike others who only talk about change, Romanova is doing something about it. She’s written a pamphlet entitled Designing with Color to help skaters choose costumes that are right for them. Romanova’s treatise covers subjects such as body shapes and costumes, fabrics, make-up, hair, accessories, and of course matching colors to skater’s skin tones as well as to their programs.

“I wrote the book while Igor and I were doing summer shows in Idaho,” Romanova recalled. “We did two shows a day and in between shows, I worked on my book. I’ve always been artistic and my parents really wanted me to be an art teacher. I took two years of art in high school, then I went to art school for another five years. I got a great deal of inspiration from the arts and I loved to draw. One time, I drew a picture for Tatiana Tarasova of the rink where she used to coach. She still has it on her wall.”

“But somewhere deep in my soul I knew I’d be teaching someday,” Romanova continued. “From the time I was 17 or 18, I knew that’s what I wanted to do. I spent four years training to be a teacher at the Pedagogical Institute and it was actually fun. After Igor and I retired from ISU competitions, we moved to America and tried to do competitions and coach at the same time, but it was impossible. We couldn’t compete our selves and get our kids ready for competition. Coaching is 24/7. We hardly ever leave the rink. It’s a hard life, but I wouldn’t wish for anything else.”

Romanova and Yaroshenko have four competing dance teams. Alexandra and Roman Zaretski, a young Israeli couple who placed eighth at the 2003 Junior Worlds, moved to Wilmington after being referred by an Israeli coach. Novices Liz Palmer and Ryland Stucke, tenth in novice in 2003, called from Oregon and asked to work with Romanova, then moved to Delaware over the summer. Juniors Michelle Scott and Alex Clark, ninth in novice last year, joined the group when Romanova found Clark on the Internet to partner Scott, who was already working with her. A pre-juvenile team rounds out their group, Roobi Gaskins and Andrew Nagore, just six and seven years old. “Each team has its own style,” Romanova said, “but they like to compete with one another.”

“We’re like a big family on and off the ice,” Yaroshenko said. “That’s the way our coach used to do it. We just bought a big house with five bedrooms and many of our students stay with us. Parents feel better if the kids have someplace safe to stay near the rink.” “We try to help them with the way they eat, sleep and use their free time,” Romanova added. “And there’s always teenager problems. When I was an amateur skater, I though coaching was so easy. Now I’m like a mom for nine people, including Nikita (their son). He likes to come to the rink with us and sometimes skate. I was actually on ice when my water broke, but I finished the lesson before going to the hospital. Three weeks later, I was back on the ice.”

Yaroshenko teaches a lot of adult and solo dancers, including Julia Schiele, who won several events in Lake Placid in August and some freestylers. “We get a lot of support in this club from our adult skaters,” he noted. “Igor doesn’t get a break,” Romanova. “He’s always partnering the adult ladies on Tuesdays.” She choreographs programs for dozens of skaters. “The programs come easily when you have lots of experience,” she said. “I see the images in my brain when I hear the music. It’s like a higher power. Usually the program comes. But sometimes it doesn’t and my brain shuts down. So I go to the movies or eat some chocolate or read a book and have a break, then I see things anew. I do the choreography for over 30 freestyle programs every year,” she said. “Plus all the programs for all of our dancers. For three years in a row, I organized a club show too. I did the choreography, scripts, costumes, lights, everything. But it was too much.”

Natalia Linichuk and Gennady Karponosov, their coaches at that time, brought the couple from the Ukraine to the US. “After we finished our amateur career we wanted to try teaching,” Romanova said. Many famous coaches were trying to get jobs. We had worked with Calla Urbanski on the Mannheim Steamroller Tour and she introduced us to the managers of the rink. We started the next day and love it here. It has the best ice on the East Coast.”

“We’re trying to combine the best of the U.S. and Soviet systems,” Romanova stated. “It takes some time to develop your own coaching style. The generation is changing now. There are lots of young coaches. It’s hard to be in ice dance because the couples break up so often. How can we expect boys to want to do something when the media doesn’t support it. They can play football or baseball or hockey. We need to go in a different direction and show that dancing shows how to be a woman and how to be a man.”

“It took time to get used to American kids and their relationships with their parents. It’s hard to convince the kids that sometimes you have to do things that are not fun so you can have big fun later. We try to teach them that hard work will always bring good results, sooner or later. I’m so glad my parents made me work hard. They gave their last ruble to help me and try to make me happy. When I became a coach I became ten times more knowledgeable about what my coaches made me do. Now I want everyone to be the best they can be, to work hard to be better. You can call me a perfectionist. I like to excel or not do something at all. I think that’s a good quality for a coach to have.”

The coaches don’t get much time for a holiday. “The U.S. season starts so early that it’s almost impossible to take a break in the summer,” Romanova said. “And the associations always schedule events at the same time. What are the skaters supposed to do when we have couples at three competitions on the same day and there are only two coaches? The older kids can do some things themselves, but it’s really hard on the younger ones. We can have another coach come and work with the dancers, but it’s not the same.”

Romanova and Yaroshenko split their coaching duties in half. He focuses more on technique and the compulsory dances, while she does the original and free dances. He cuts the music and she designs the costumes. Both coaches spend nearly half of their time doing paperwork, paying bills talking with parents and other off ice activities. “We have to read all the rules,” she said. “Every year there are more rules. Soon there will be nothing left to choreograph outside of the rules. Even now, we have to be very creative to do anything new and still be inside the rules. But it’s a lot of fun to teach the kids. Fifteen and sixteen year old girls are like sponges. They pick up anything you teach them.”