This may be a breakout year for Alexandra Pauline (Sasha) Cohen, the diminutive ballerina on ice who has captivated the public’s eye in the last year. Cohen, who had her 19th birthday party at this year’s Skate America, won her first major international competition last season when she took the ISU Grand Prix Final title in St. Petersburg, Russia. She won her first Grand Prix medal the same season by winning at Skate Canada, then at Trophée Lalique.

This season, she did even better, dominating Skate America, Skate Canada, and Trophée Lalique. However, she came in second at the Grand Prix Final behind Japan’s Fumie Suguri after some costly mistakes. “It’s been tough,” Cohen said of her competitive season so far. “I haven’t really had a chance to train since before my Grand Prix series began. It starts to show when you are traveling and competing and don’t have time to stay at home and train.”

Under the new Code of Points scoring system, Cohen often scored more points in the free skate than other ladies scored during the entire competition. Cohen also took the gold at the 2002 Figure Skating Challenge and the 2003 Campbell’s International Figure Skating Classic. She barely missed a third place finish at the 2002 Olympics and the last two World Championships, placing fourth. She was sixth in her only trip to the World Junior Championships in 2000.

At the 2000 U.S. Nationals (her first Nationals as a senior), Cohen won a silver medal, but missed the next season due to a series of injuries. She came back to win a second silver in 2002 and a bronze in 2003. She also won a silver in junior ladies in 1999, but has yet to take the top spot on the podium at any U.S. Nationals. Although she has all the skills, Cohen admitted that nerves had gotten to her in the past.

“My goal for this season is to go out and enjoy every performance and not be nervous,” she said. “I’m usually nervous at most competitions, but I want to go out and skate as clean as I do in practice. Tatiana (Tarasova) is always telling me to go out and enjoy it and this year I haven’t been as nervous. I’ve been working hard on a day-to-day basis. I do at least four full run-throughs of my long program every week and the more you go through it, the more comfortable you feel.” Cohen trains for about five hours a day at the International Skating Center of Connecticut with Tarasova. After training with John Nicks in California for many years, Cohen moved to Simsbury, Connecticut to train with Tarasova in the summer of 2002.

Cohen likes to do some of her own choreography, which incorporates a variety of unique moves including a Charlotte spiral, a ‘Sasha spiral’ with an incredibly high leg lift, and a very fast ‘Sasha spin’, again performed with her free leg held straight up over her head. Under the Code of Points, most of her moves are rated at the highest level of difficulty. So far this season, Cohen has used a triple Lutz/double toeloop in both the short and long program, as well as a triple flip/double toeloop in the long. “I’ll work on the triple loop/triple loop after Nationals and before Worlds. I want to see how the scoring goes with the old systems before I make any changes. We made the programs as we usually do but we’ve made some additions and changes for the new system,” Cohen said. “I like the new system a lot. I like how I can judge my own performance and see what I have to work on.”

She is using the same music as last season for her short program. “I used Malaguena when I was in intermediates and I wanted to use it again. I love Spanish music, like Carmen and tangos,” she said. “It’s the kind of music I feel most naturally. It makes me want to get up and dance. I’m not very musical myself in terms of playing it, but I love to interpret it. I can play the piano and the violin a little.” For her new long program, Cohen is using Tchaikovski’s Swan Lake. “Tatiana (Tarasova) brought me the music,” she said. “The cuts were so beautiful that I wanted to use as much as possible.” Tarasova choreographed both of Cohen’s competition programs, as well as her exhibition program to Romeo and Juliet.

Cohen was actually a gymnast before she became a skater. “I was in gymnastics from five to seven,” she remembered. “I liked doing the trampoline and floor exercise, but I definitely did not like the bars. One day when I was seven, one of my friends from gymnastics invited me to go skating and I really liked it, so I switched.” Cohen landed a triple salchow when she was 12 and quickly mastered the other triple jumps, except the triple Axel. At 16, she began working on the quadruple salchow, landing her first one in competition at Skate America in 2001. Cohen said her favorite jump changes all the time, but now it’s the toe loop. But she’s never tried a quad toe. She is working on several triple-triple combinations, including triple lutz/triple toe, triple toe/triple toe, and triple loop/triple loop.

Cohen has graduated from high school, but she hasn’t picked a post-skating career. “I’ve got a little while to think about it,” she said. “There are so many things I like to do that I haven’t concentrated on just one thing. I’ve got so many options that I can’t decide. I really love fashion though. I can’t sew but I love to design costumes. I designed the yellow dress for my short program this year.” Mare Talbott designed her Swan Lake costume.

“When I need to relax, I try to go to Florida for a few days,” she said. “I end up doing a lot of traveling and I really like New York City and Paris. They have great shopping and great food. I love fashion and I really like shopping. And I like to cook, mainly baking cookies and desserts and things. I also like to watch movies, comedies and dramas but not horror.” Unlike many skaters, she rarely uses a computer or goes on the Internet. Cohen doesn’t collect anything now, except clothes. She used to collect Beanie Babies, but now she donates the toys she receives to local hospitals and other charities. “I work with Girls, Inc.,” she noted. “It’s a charity that helps girls, especially orphans and other underprivileged girls, to be more independent and assertive. I visit them and try to tell them that they can achieve their goals.” 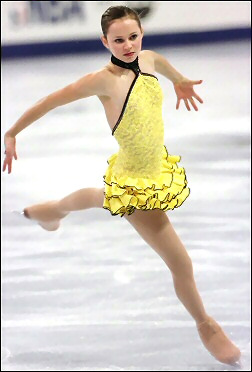 Editors’ Note: Sasha Cohen switched coaches (from Tatiana Tarasova to Robin Wagner) less than a week after this article was released.