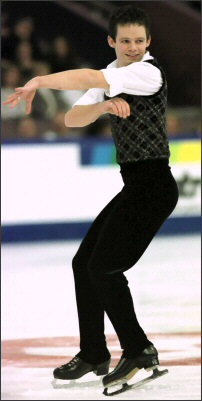 Canada's Christopher Mabee was surprised when he won a bronze medal at the Junior Grand Prix Final of Figure Skating.

Canada’s Christopher Mabee was surprised when he won a bronze medal at the Junior Grand Prix Final this season. “My goal was just to do well at the Junior Grand Prixs and make the final,” he said. “I was happy just to get there and eighth would have been fine with me. I didn’t expect the podium at all. The short was absolutely insane. Everyone but Griazev skated clean. The long was just as good. The top four all had seven triples. But it was just like in Slovenia. I did two triple Axels and I haven’t missed a triple Axel all season.” Mabee won the JGP Skate Bled in Slovenia and took third at Skate Slovakia.

Then it was on to Canadians where the likable 18-year-old hoped to make the top eight in senior men. He exceeded his expectations there too, moving up to sixth from his ninth-place finish in 2003 and securing a spot at Junior Worlds. If he skates well there, Mabee will have achieved all of his goals for the season. In previous years, Mabee won the silver in novice and the bronze in juniors at Canadians before moving to seniors. Eventually he hopes to become Canadian champion and a World and Olympic medallist. “I’d like to make it to the Olympics in 2006,” he said, “but realistically 2010 will be better. Some of the other men have to move aside first. Our depth is so good that Nationals can go to almost anyone.”

Mabee started skating when he was seven. “My sister was skating for a year or two and I had to come with her to the rink,” he stated. “I asked my mom why can’t I go out on the ice, so she signed me up. My dad actually built a rink for us in the backyard to play hockey. I was a good stick handler and we always had people offering to buy me equipment, but I had no interest in hockey.” Mabee landed his first triple, a lutz, when he was 14. “I had trained with Paul Wirtz in Montreal in 1998,” he remembered, “but then I got injured and I wanted to be nearer to my home because Montreal was so far away. So I started at Mariposa so I could commute home on weekends. In three or four weeks, all my triples were clean.”

Doug Leigh and Lee Barkell have coached Mabee in Barrie for the last five years. He works for two or three hours a day on ice and about an hour or an hour and a half off ice. “I do what’s comfortable for me,” he said. “They know how I work. That’s something special that’s developed over time there. I try to do both programs every day. Right now I’m working really hard on quads. I’ve done four different quads at home and fallen on some clean ones. I’m doing the quad toe as just a competition practice thing but I hope to have a quad in my program next season. I’m also doing triple Axel-triple toe or triple-lutz triple toe in competition. If the Axel is good, then I’ll go for it. I usually decide in warm-up which one I’ll do. The triple Axel’s probably my favorite jump now. It’s definitely not the salchow.”

Heather Hayward choreographs Mabee’s programs. This season he is using Fantasia for the short and George Gershwin’s Slaughter on Tenth Avenue and Rhapsody in Blue for the long. “This is the second year for short,” he said. ” Paige Aistrop told me that she had a great piece of music for me. For the long, I sat in the Mariposa music room for hours and listened to music. When I walked out, I had it all down on paper and where I wanted it cut. I usually change one program every year, but it depends on how comfortable I am with the program and whether I think I can give any more to the music. I definitely like to use upbeat music. I hate the ones where time goes by so slowly. I’d like to do a tango. I thought about doing one this year but all the young kids were doing tangos, so it won’t be for a while yet.”

“I listen to the widest range of music of anyone I’ve talked to,” he continued, “everything from classical to country music. But I don’t do too much off ice. I go to movies but I usually like to do things that are laid back, that get my mind off of skating. I’ve been skiing a bit, two or three times a year and I have a lot of fun doing that. I also keep my stuffed animals. I like to look back and remember where I got them. And we have a little dog at home, a Shih Tzu named Vader. A mean name for a little dog.” Mabee also uses his computer a lot to keep in contact with friends he’s met through skating. “I scan photos from the competitions too,” he said. “I take a lot of photos off ice. When I went to China with my sister, we filled a whole scrapbook.” Mabee enjoys travel. “I liked Slovenia and Malmo best,” he said. “I met so many nice people and learned so much about my skating there.” He’d like to visit Australia and Russia.

A fundraising group named Youth and Dreams holds a dance and silent auction each spring. Most of the funds raised from this event are forwarded to Skate Canada in trust for Mabee, while a portion of the proceeds is donated to a charity group such as Ronald McDonald House or Camp Trillium. “It is important to give back to the community,” Mabee said.