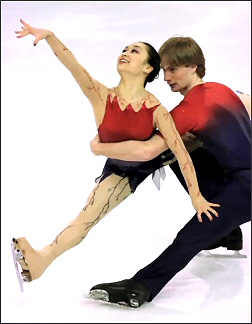 Utako Wakamatsu and Jean-Sebastien Fecteau often look more like circus acrobats than figure skaters as the super-flexible Wakamatsu twists herself into a variety of pretzel-like shapes.

Canada’s Utako Wakamatsu and Jean-Sebastien Fecteau often look more like circus acrobats than figure skaters as the super-flexible Wakamatsu twists herself into a variety of pretzel-like shapes, especially in some of the lifts. So it’s no surprise that the couple works with an acrobatic trainer from Cirque du Soleil. “We’ve seen some of the moves that they do in Cirque du Soleil and tried to incorporate them into our programs,” Fecteau said. “Some of the moves Richard (Gauthier) has suggested and some of them we have made up just by trial and error.”

Both skaters missed the 2002-2003 season. Fecteau was sidelined after his former partner, Valerie Saurette, retired from skating when the pair failed to reach the Olympic Games. The couple had won three bronze medals at Canadians and finished as high as fourth at the Four Continents Championships and 13th at the World Championships in 1999. Wakamatsu finished only sixth in the Japanese Nationals in senior ladies and didn’t receive any international assignments so she was open for a change of scenery and a change of discipline.

“Utako was at Skate America in 2001 when Richard saw her skate,” Fecteau said. “He told her coach that she would be good in pairs. When Valerie quit, Richard contacted her and asked her to come for a tryout in February last year. We started training together in April. The physical part was hard at first because Utako is so much smaller than Valerie. She’s tiny but powerful and expressive and such a hard worker.”

Both skaters started because their sisters were skaters, Wakamatsu at eight and Fecteau at three. “I didn’t want to be a skater because it was too cold,” Wakamatsu stated. “I wanted to be a marathon runner and used to run three kilometer races in school. But my mom told me to try studying skating stories and maybe I would like it more. I learned to like figure skating not only for the jumps but also for the choreography and presenting a theme. And the nice dresses. It was a much more difficult challenge. I landed my first triple salchow when I was 12. That’s my favorite jump.”

Fecteau skated freestyle until he was 22, qualifying for Canadians in junior men. But he gave up his spot when the pairs and men’s events were scheduled too close together. He has been skating pairs since he was ten. “Skating all by myself all the time was boring,” he said. “It’s nice to have someone to encourage you. In pairs, there are all kinds of moves to master as opposed to mainly just jumps and spins. I like the variety of elements.” “I wanted to do pairs when I was a kid,” Wakamatsu noted, “but there were no pairs coaches or partners in Japan. I really like the lifts. That’s why I like to do pairs so much.”

The couple trains at the St. Leonard Club with Richard Gauthier and Manon Perron. They train for three hours a day, five days a week on ice and three hours a week off ice. “Sometimes we do ballet, sometimes something else,” Wakamatsu said. They use both Julie Brault and Julie Marcotte for their choreographers. “Julie Brault had the long program music from last year,” Fecteau said. “Julie Marcotte wanted to do something completely different for the short.” For the long, they used Rachmaninov’s Piano Concerto No. 2 and for the short, Kirwani by Jolly Mukherjee. “It’s funny because at first I didn’t like the music,” Wakamatsu said. “But after skating with it for a year, it grew on me. I like classical music and tangos. Sometime I’d like to try skating to some funny music.”

Fecteau is still active in coaching. “It’s something I plan to do for a few years,” he said, “but not long term.” He attended college but had to stop after a year of physiotherapy classes because there wasn’t enough time for skating and school. Wakamatsu plans to go to the university and then stay involved in skating as either a coach, a choreographer or a translator.

To relax, she enjoys watching movies, doing yoga and cooking. She also collects photos from other countries. “I like things that take my mind off skating,” she said. She likes traveling and enjoys going to the beach for vacation, but hasn’t done any traveling except for competitions. She also uses the computer a lot to email friends and keep up with their website. He plays golf in the summer, goes out with friends, and watches movies. “My favorite trip was to Japan, but I’d like to see Egypt,” he said.