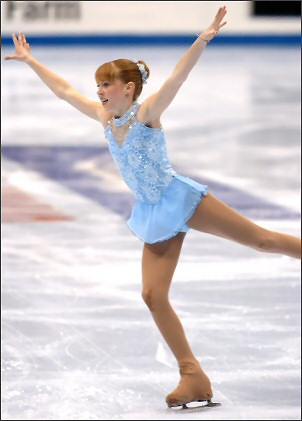 Danielle Kahle has risen quickly on the U. S. national figure skating scene.

Danielle Kahle, who turned 15 in April, has risen quickly on the U. S. national scene. After winning the novice ladies title in 2002, she took the bronze in juniors in 2003, then jumped to seniors in 2004, finishing tenth. “It was my first year in seniors, but I didn’t skate as well at Nationals as I’d hoped,” she admitted. But she competed strongly in junior international competition, winning the Croatia Cup in Zagreb and finishing second at the Mexico Cup in the Junior Grand Prix Series to qualify for the Junior Grand Prix Final, where she placed sixth. One of her goals for the 2003-2004 was to compete at Junior Worlds where she hoped to make the top three, but she finished 11th.

“Skating’s a really great sport,” she stated. “I’ve always liked to compete but when I won novice, I realized you could travel to other places. I really love meeting people around the world. I really enjoyed Slovenia. That was my first trip out of the country. Mexico City was crazy. There were lots of exotic things to do. Someday I’d like to go to Australia, Germany and Japan.” Khale is currently scheduled to compete at Skate Long Beach 2004, a junior Grand Prix event which will be held in Sep 2004.

Kahle first went to the ice rink when she was three on a family outing. After she got her first pair of figure skates for her fifth birthday, she began taking lessons. She was also swimming and playing baseball, but when she broke her arm playing baseball the next year, she decided to concentrate on skating. She landed her first triple salchow, which is still her favorite jump, when she was 12. Last season, she used a triple salchow-triple loop combination in competition. “I can do triple loop-triple loop,” she said, “but it’s illegal to have three loops in the program.” She’s also working on a triple Axel in harness.

The petite redhead trains with Frank Carroll, Ken Congemi and Cindy Gould in El Segundo, California. She works for about three and a half hours a day, six days a week on ice, and does about 45 minutes a day of off ice training. That includes Pilates, stretching and running. “I do lots of cycling in the summer and roller blade for fun with my brother,” she added. “I also like to play tennis with my sister. I’m not a big ballet fan, but I’d like to do some hip hop or dance classes.”

Carroll and Henrik Walentin choreograph Kahle’s programs. “Usually Mr. Carroll will bring some music he likes and I’ll bring some music I like and we’ll settle on something we both like,” Kahle said. “For last season’s free program, I chose the fast part and he chose the slow part.” She used Much Ado About Nothing, Sense and Sensibility, and a Charlie Chaplin medley for the long. She used All That Jazz and Hot Honey Rag by John Kander from the musical Chicago for her short program. “I like fast things,” Kahle said. “The music from Chicago gets me really worked up.”

“I listen to all kinds of music,” she continued. “I’m the kind of person who likes every song and every movie I watch. I like to go to the movies or to the beach with my skating buddies after practice. I also love to play the piano. My mom and my grandma taught me how to play when I was little. My mom used to travel the world playing clarinet in a band.” Kahle also likes to shop and watch her three brothers basketball games. She enjoys cooking and sewing. “I’ve tried to make a practice dress, but I don’t have a sewing machine yet,” she stated. “I’ll sew on something for hours, then get sick of it and throw it in the corner. My mom and I design my dresses. We draw them on paper then have them made and my mom puts on the crystals.” Kahle collects anything to do with ladybugs, mugs from cities she visits, and shirts for her sister. She also has a dog, a golden retriever named Max.

Kahle just finished the ninth grade at Moorpark High School. “I really like math, psychology and English literature,” she said. She plans to go to college, but noted, “I’m going to be skating my whole life. I’d love to make the 2006 Olympics, but I’m going to try to do both 2006 and 2010. Afterwards, I want to be a professional skater. I hope to do Stars on Ice because I really love that show.”