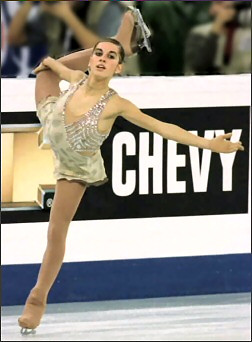 At the 2003-2004 Italian Nationals, Valentina Marchei, a lively 17-year-old from Milan competing in her first Italian senior championships, upset last year’s sensation, Carolina Kostner. Marchei then went on to finish fifteenth in her first major international at the 2004 European Championships. “Europeans was wonderful,” she said. “I like skating for the public so I wasn’t scared.” She competed in both junior and senior internationals this season, ending the year by placing 14th at the World Junior Figure Skating Championships and 23rd at Worlds. “Juniors was more difficult than seniors,” she said. “In seniors, I can breathe between elements. In juniors, I have to run. All I take out of my program is one spin.”

Marchei doesn’t come from a skating family, but her father was a famous marathoner. He competed in both the 1980 and 1984 Olympics, finished second in the 1980 Boston Marathon and was the first Italian to finish in the top ten in the New York City Marathon, when he placed fourth in 1978. His daughter didn’t even start out to be a figure skater. “I started gymnastics when I was seven,” she said. “I took gymnastics until I was nine, then my coach, Giulia Staccioli left to go to the United States to work with the Momix of Pendleton. He was a friend of my parents from when he competed in the 1984 Olympics. My parents wanted me to continue in other sports so as I was able to do roller-skating, I tried skating on ice. And I decided on figure skating.”

Marchei normally trains with Cristina Mauri in Milan, but two summers ago, she also trained in Connecticut with Galina Zmieskaya. “That was my first time in the United States,” she said. “I got my first triple lutz with Galina. She’s a good coach and very funny. I also went in the summer to Courchevel for training with a supervisor coach, Pierre Trente. I went there for five weeks for the last five years.”

“I go to a special school for athletes,” she continued. “In the morning I study at home, then I go to the rink between 12 and 5 and from 6 to 11, I have school.” Marchei trains for 2-3 hours on ice and another two hours off ice five days a week. “I do classic dance and jumps and gym and drama classes for interpretation,” she added. Marchei has one more year in school before she graduates, then she’ll go to university. “I want to be a physical education coach in a sports center,” she said.

Raffaella Cazzaniga and Corrado Giordani choreograph her programs. Last season, she used a flamenco for the short and Les Feuilles Mortes by Yves Montand for the long. “Last year, I chose my music,” she said. “A friend of Giordani, Massimo Murru, gave me the music. He is the first dancer in the opera in Milan and I always go to see him at La Scala. For my gala program, I chose Joyful from the movie Sister Act because I like rock and pop music. It was difficult for me to skate the free program this year because it’s slow music and I like to skate fast. Until now, I couldn’t do it.”

For this upcoming season, Marchei will be using Prokofiev’s Cinderella for the short and Rene Dupere‘s Xotica for the long.

Off ice, she listens to pop music, goes out with friends, goes disco dancing, and collects cups from all over the world. For a lucky charm, she has a small pink bear from the Europeans Championships, naming it Brian, since she skates with Joubert, the new European champion, in the summer.

“I don’t know how long I will compete,” Marchei stated. “I’ll quit when it becomes boring. Hopefully never.” Marchei will compete for another year in the Junior division but has been invited by the ISU to compete two senior Grand Prix events in Japan and France.