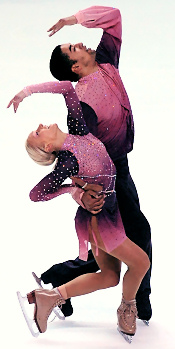 Overnight leaders Aljona Savchenko (23) and Robin Szolkowy (28) of Germany skated their way to gold after their performance to L'Oiseau by René Dupéré.

With less than three points separating the top three teams, all skaters were under pressure to put out their best performances.

Overnight leaders Aljona Savchenko and Robin Szolkowy were able to maintain their position, separating themselves from the pack with over a 14 point total difference.

The German champions also won in 2005 at this event.

“Canada is good ice for us,” joked Szolkowy.

Their seamless program was flawed, however, when Szolkowy popped his jump on the side-by-side triple Salchows while Savchenko put her hand down on hers.

“Our program wasn’t clean today,” admitted Szolkowy, “but it was better than [at Nebelhorn Trophy].”

The European champions earned 119.19 points for their routine to L’Oiseau by René Dupéré, and with a total score of 188.63, easily won the gold.

“We are skating our program better and better each time out,” said Szolkowy, adding that they had been working a lot on their transitions.

Canada’s Jessica Dube and Bryce Davison, who stood in second after the short, once again gave an intense performance in their long program to The Blower’s Daughter by Damien Rice.

“Our goal was to beat our mark of 111 from last week (Skate America),” revealed Davison. “We didn’t make it, but we’re [still] pretty happy.”

The 2007 Skate America champions opened with a good double twist, a beautiful side-by-side double Axel-double Axel sequence, and a difficult lift. Despite a fall by Dube on the side-by-side triple Salchow, the team otherwise delivered a very good triple flip and good spins to earn 111.08 points.

“It went pretty well today,” said Davison. “We obviously had a couple of errors, but it went pretty smooth and we had a lot of fun out there today.”

The Canadian champions were able to hold onto second overall with a total score of 174.20 points. Their finish today, coupled with the win at Skate America, qualifies them for the Grand Prix Final in Dec.

“Our main goal was to get a medal on a grand prix, so we’re very excited about going to the final,” said Dube.

The team will also be competing at NHK (a non-scoring event), a week prior to the Grand Prix Final.

“Skating at competitions gives us a bit of break,” shared Davison. “When we’re not competing, we train on the ice three to three-and-a-half hours and two hours off the ice. So when we’re here (at a competition), we get to relax because when we’re on the ice, we have to make each time more meaningful.”

Davison later revealed to the press that they plan to add the throw triple Lutz to their program at NHK Trophy.

The team attempted to open with a throw quadruple Salchow, and although it was fully rotated, Kawaguchi stepped out of the landing.

“It’s the first time we’ve tried the quad salchow in ISU competition,” said Kawaguchi. “I’m very happy that I didn’t fall, but there were some other little mistakes and I’m not happy about that.”

The 2007 Coupe de Nice champions recovered to produce a side-by-side triple toeloop-double toeloop sequence and a throw triple loop, but had problems on their side-by-side double Axels, with Smirnov stepping out of his and Kawaguchi falling on hers.

“Overall it was ok,” said Kawaguchi, “but we want to skate better at Cup of Russia. We have about two weeks and lots of things to work on to make both programs better.”

Canada’s Anabelle Langlois and Cody Hay finished fourth in the long (102.69 points) and overall (156.67 points) with an inspiring routine to music from the Dr. Zhivago soundtrack.

In contrast to their short program, this routine showed a marked increase in their speed, unison, and connection between the two skaters.

The Canadian bronze medalists produced a spectacular throw triple Salchow, a triple toeloop-double toeloop combination, a very good double twist, and difficult lifts. Their only major mistake was when Langlois two-footed the landing of a throw triple Lutz.

Savchenko and Szolkowy earned 15 points for their win and will compete alongside Kawaguchi and Smirnov (11 points) in three weeks at Cup of Russia.