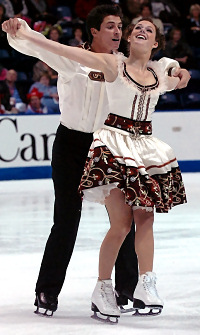 Skate Canada is the second of six events of the International Skating Union (ISU) Grand Prix (GP) series and is being held at the Colisee Pepsi, Nov. 2-4, in Quebec City (QC) Canada.

Approximately 56 skaters from 14 different countries are competing for points and global prize monies totaling $180,000 in U.S. dollars. The points will go toward qualification for the Grand Prix Final of Figure Skating in which the top six competitors from each discipline will be invited to compete for a total purse of $272,000 U.S. dollars.

The skaters were seeded and invited for the six GP events according to the results of the 2007 World Figure Skating Championships. Competitors who finished first through sixth place in each discipline are considered seeded and are assigned to two GP events by drawing, while those who placed seventh through 12th, are invited.

Should one of the top six from 2007 Worlds retire or opt out of the GP, then the next highest ranked skater becomes seeded.

Next priority is given to skaters who achieved a seasonal best score which was equal to or better than those who placed seventh through 12th at the ISU World Championships 2007. If vacancies still remain, then competitors who placed 13th and below at the 2007 World Figure Skating Championships are selected in order of placement.

Pair teams can compete in a third event if there is an open slot, however, it is considered “non-scoring” in terms of points. Prize money still applies according to placements.

Skate Canada kicked off on Nov. 2 with the Compulsory Dance.

Tessa Virtue and Scott Moir of Canada sit in first place after the CD with 36.25 points. The team displayed matching steps that were perfectly timed, however, they had a bit of a stumble going into their final pose (not “scored”).

Nevertheless, they were happy with it.

“The Polka went well,” said Moir. “As always, after compulsories, we’re excited about getting into the next event.”

Moir also admitted that the Polka wasn’t their favorite.

“Every compulsory is really different,” he explained. “It took us a while to get into it.”

The team hopes to build on it and find there way to liking the dance.

“We kind of like the Argentine Tango and Austrian Waltz more, to tell you the truth,” Moir admitted.

Italy’s Anna Cappellini and Luca Lanotte showed excellent speed and remained very close for the most part of their dance, earning 32.23 points for a second place finish.

Melissa Gregory and Denis Petukhov of the U.S. also showed good speed and control, albeit a bit cautious, and are only .20 of a point behind the Italians with a score of 32.03.

France’s Pernelle Carron and Matheiu Jost are currently in fourth, followed by Julia Zlobina and Alexei Sitnikov of Russia.