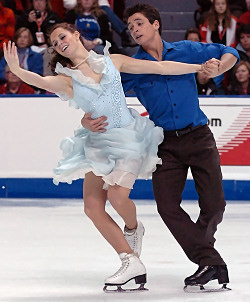 Canada's Tessa Virtue and Scott Moir perform their Free Dance to music from the Umbrellas of Cherbourg soundtrack.

A damper was cast over the Free Dance (FD) when USA’s Melissa Gregory and Dennis Petukhov took a horrible fall during the warm-up.

The U.S. silver medalists, who were in fourth after the Original Dance (OD), were practicing a rotational lift when Petukhov lost his balance and grip, causing both skaters to fall hard.

Except Gregory didn’t get up.

Initially it appeared that both skater’s hit their heads on the ice, though reports say that Gregory fell on her chest.

Petukhov stood up and came to Gregory’s side and worriedly looked on while medical staff mobilized his wife and placed her on a stretcher. She was immediately taken to the hospital.

All teams were visibly shook up over the incident. It would be difficult for them to perform with the images of Gregory laying on the ice in their minds.

At press time, however, it was announced that Gregory’s vitals were stable and that she would be released from the hospital after a few hours under observation.

Canada’s Tessa Virtue and Scott Moir, who were last to skate, won the gold medal by a landslide of 25.50 points, while Italians Anna Cappellini and Luca Lanotte captured the silver.

Virtue and Moir delivered an intense and emotional routine to music from the Umbrellas of Cherbourg soundtrack, receiving level fours on every element with positive GoEs.

“Our program is based right on the movie Les Parapluies De Cherbourg,” explained Moir. “We are the characters in the movie and we’re trying to tell the story. It’s very young love and he has to leave for the military.”

The overnight leaders opened with a very fast twizzle sequence, followed by a curve-rotational combination lift and combination dance spin.

“We felt the performance went really well for us,” said Moir. “We felt comfortable out there on the ice and we tried to take it one element at a time. That was our game plan.”

The team earned a new personal best of 99.62 points, and are are well on their way to qualifying for the Grand Prix Final if they do as well again.

“We’re looking to build for Japan, our next competition,” said Moir.

Cappellini and Lanotte, who stood in second after the OD, placed third in the FD with a new personal best of 87.13 points in their routine to Verdi’s La Traviata.

The routine told the story of La Traviata with Cappellini starting out dead, coming to life, and then dying again at the end.

The Italian silver medalists opened with dramatic movements into a dance spin, followed by a good level four circular step sequence and three difficult lifts. However, the team had a bit of trouble getting out of the fourth lift and had to come to a stop.

“We had a problem with the serpentine lift in our practice this morning,” admitted Cappellini. “We tried to fix it. We tried to change it and it didn’t work. Sometimes it’s better to do what you do all the time and not try to tweak it at the last minute.”

The team also had problems on their twizzle sequence, but otherwise produced a level three midline step sequence and a level four straightline lift.

Despite the mistakes, the 2007 Winter Universiade champions were able to hold onto second place overall with a total score of 171.57 points.

“Obviously we’re not really pleased with our performance today,” said Cappellini, “but we love the program and we expect it to get better and better during the season.”

When asked if Gregory and Petukhov’s fall affected them, Cappellini replied: “Yes, I get very nervous on the lifts. Not so much him (referring to Luca), so it made me a little scared and scared for Melissa.”

Carron and Jost drew the audience in right from the start with their routine to Chopin’s Nocturne, which earned them a new personal best of 87.13 points. However, with a total score of 167.83, the 2007 Winter Universiade bronze medalists missed silver by just under four points.

“Our goal coming to Skate Canada was to win a medal,” said Jost, “and we did it. We are especially happy to have been second in the free dance.”

The team is also hoping for a spot at worlds.

“We want to be the second place French couple at Europeans (France gets 3 spots) so that we can get the second spot for France at Worlds,” revealed Jost.

The French bronze medalists captured every nuance of the music in their routine, earning level fours on all their elements except for a dance spin and a midline step sequence. Their twizzles were fast and very well done, as was their circular step sequence which matched the music perfectly, and their five lifts seemed effortless.

Canada’s Allie Hann-McCurdy and Michael Coreno also scored a new personal best of 78.90 in their perky dance to Gershwin’s Rhapsody in Blue, placing fourth in the FD and overall with 152.16 points.

Canada’s Kaitlyn Weaver and Andrew Poje moved up from eighth to sixth place overall after placing fifth in the OD.

Virtue and Moir earned 15 points at this event and will compete next at NHK Trophy.

Cappellini and Lanotte (13 points) and Carron and Jost (11 points) will share ice again in two weeks at Trophee Eric Bompard.