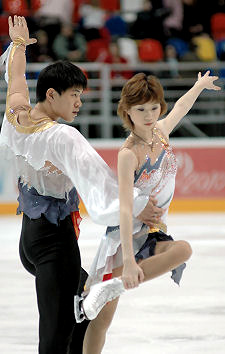 China's Dan Zhang and Hao Zhang placed first in the short program after their performance to "Piano Fantasy".

China’s Dan Zhang and Hao Zhang won the Pairs Short program, despite the fact that Hao is currently suffering from a painful toothache.

With their strongest elements completed, the students of Bin Yao relaxed a bit, losing some unison on their side-by-side spins, but the judges apparently decided the spin deserved a lot of credit and awarded them +0.30 for GOE.

The choreography of their short program is perhaps the most complex they have ever done as it relies on more than their usual speed and power, but the overall impression of their skating is still marred by their less than perfect lines and unison. Nonetheless, the Trophée Eric Bompard champions earned a score of 69.96 (40.92/29.04) points.

“We performed quite well,” said Hao Zhang, “although our spins and spirals were better in France last week (at Trophée Eric Bompard).”

Savchenko and Szolkowy began their program by going almost point-by-point with the Chinese team. They received +1.40 GOE for their opening throw triple flip and +1.26 GOE for their triple twist (which received a level two in contrast to Zhang and Zhang’s level one), but then Savchenko lost her balance and fell on the landing of her jump on the side-by-side triple toeloops.

This blunder settled the fate of their placement, and that realization dumped their spirit a bit. However, the 2007 World bronze medalists forged on to execute properly stylized positions in their spins and a unique level four lift.

The German champions received slightly better program component scores than the Chinese team in their routine to music from the Asoka soundtrack, but they were not able to overcome the mistake on the jump: 66.78 (37.90/29.88) points.

“This was the worst short program,” said an upset Savchenko. “But we can’t change it now. We just have to do better tomorrow.”

Mukhortova and Trankov earned a new personal best of 63.10 (35.70/27.40) points despite making a more noticeable mistake than the one they made at Trophée Eric Bompard.

It happened on their final element – a throw triple salchow – an element used as choreographic accent. Mukhortova’s turn out of the landing marred the impression of not only the element, but the program in general. The 2007 Trophée Eric Bompard bronze medalists also lost unison in the second half of their side-by-side spins, and their straightline footwork sequence received only a level one.

Nonetheless, the Russian champions produced good side-by-side triple toeloops and and a level four lift (+1.40). The team continues to improve presentation-wise, and except for the mistake on their final element, their performance to Raul di Blasio’s Otonal was smoother and more powerful than ever.

“We could have skated a lot better,” said Trankov. “I am not a hundred percent yet recovered (from his stiff neck) and it’s affecting my concentration, but it’s not too bad and it didn’t really bother me tonight.”

Teammates Yuko Kawaguchi and Alexander Smirnov are currently in a close fourth with a new personal best of 62.94 (37.50/25.44) points.

They opened their program to Rondo Capriccioso with side-by-side triple toeloops, but Smirnov’s landing was a bit tight, thus receiving -0.60 for the GOE. Their other elements were strong, however, and the 2007 Skate Canada bronze medalists were awarded positive GOEs and high levels except for their triple twist (level one).

The newly-formed team can still improve their lines and extension, but their technical level is already very strong.

Ksenia Krasilnikova and Konstantin Bezmaternikh of Russia made a rather nice senior debut with a nearly clean short to music by Cirque du Soleil. Their routine featured side-by-side double Axels, a throw triple flip, and a level two triple twist. The two-time and current World Junior bronze medalists earned a new personal best of 53.96 (31.40/22.56) points for a fifth place finish.