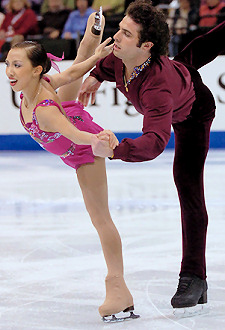 The wunderkind team of Keauna McLaughlin (15) and Rockne Brubaker (21) earned their second U.S. title in as many years with a performance that brought the audience to their feet before the music was over.

Pairs skating at the U.S. Championships has been average at best in the past several years, but there are now signs of life being shown if today’s Championship pairs free skate competition is any indication. The pair teams each performed with great promise, and the medals were not decided until the last beat of the last competitor’s music.

The wunderkind team of Keauna McLaughlin (Los Angeles FSC) and Rockne Brubaker (Broadmoor SC) earned their second U.S. title in as many years with a performance that brought the audience to their feet before the music was over. Last season, McLaughlin (15) and Brubaker (21) won their first national title on the junior level, and made a rare leap to the top of the podium at the championship level in their first try.

“It still feels kind of weird to be a national champion,” McLaughlin said as she blushed.

Her older partner added, “It’s very exciting. I have been reading a book that talks about being in a white haze while you compete, and that you don’t realize what you did until it is over. This is a feeling that I will never forget.”

From the start of their routine to Romeo and Juliet, it was obvious that the champions were here to win the title. Opening with a huge level three triple twist that earned +2 and +3 from the judges, the Grand Prix finalists demonstrated why they have been so successful so early in their career.

The 2007 NHK Trophy silver medalist gained momentum with each completed move, skating with a speed that has been absent from U.S. pairs for such a long time. As they completed each element, they gained momentum, but they weren’t perfect.

McLaughlin fell her jump on the side-by-side triple Salchows, but recovered with such poise that the error was all but forgotten.

“I felt good out there, and I put my heart out to the audience,” McLaughlin shared. “I let them see what I was feeling. We both told the story of Romeo and Juliet, and to win is just a bonus.”

The gold medalists earned a whopping 190.74 points in the competition, and displayed a mature style that was rewarded with program component scores well into the sevens. Because McLaughlin is not age eligible, the team will have to wait until next season to qualify to compete at international championships. So for now, their season is over.

“It’s kind of a blessing in disguise,” added McLaughlin. “Of course we would love to go (to Worlds), but this just gives us another year to grow and progress as a team.”

After training solidly for just two weeks, Rena Inoue and John Baldwin (All Year FSC) came to this competition prepared to challenge for their third title. What Inoue didn’t realize is that she would leave the ice with the promise of a different title- Mrs. John Baldwin, Jr.

As the couple took their final bows, Baldwin went down on one knee and popped the question to his partner of eight years.

“I wanted to do it (propose) at Worlds last year, but I didn’t think it was the right time,” said Baldwin. “(Our performance) was such a huge accomplishment, that this was definitely the right time.”

“I didn’t know what was going on out there when he asked,” Inoue said timidly. “Of course I said ‘yes’. I can not tell you how many good times and bad times that we have been through together, but we have always been there for each other. I think that we are very lucky to have been together for so long.”

Inoue (31) and Baldwin (34) performed credibly, showing all of their most difficult tricks with varying levels of success, but the team could not overcome the strong performances of the young champions and had to settle for silver.

The newly engaged team landed side-by-side triple toes with ease, something that Baldwin has struggled with in recent years. In addition, they made a credible attempt at their signature move, a throw triple Axel that Inoue couldn’t hold the landing for full credit. However, the team is reinvigorated and looks forward to training for the World Championships in March and the Four Continents Championships next month in South Korea.

“It was a great confidence boost to land the toe at the beginning of the program,” Baldwin said. “That is what our coach has helped me with. Now we will go home and train hard for Four Continents so that we can do even better there.”

Brooke Castile and Benjamin Okolski (Arctic FSC) skated a beautiful performance to Scheherazade, which helped them earn the bronze as well as trip to the Worlds. The defending champions are making strides in returning to the form that helped them to win their title last season, and they seem to be on the right track based on what they were able to accomplish here.

“Coming and skating here was tougher than I though it was going to be,” Okolski told the press. “Things can only go up from here, so I’m excited to train for Worlds and put out a more seasoned program.”

Like the champions, Castile (21) and Okolski (23) opened with a split triple twist that earned positive Grades of Execution (GOE) and a total of 6.20 points. The biggest hurdle that the team overcame was their side-by-side double Axels – an element that has recently given them so many problems. After landing the Axels, they only made one mistake when Castile made a minor bobble on the throw triple loop.

The team also earned a trip to the Four Continents Championships next month by earning 175.07 points in the competition, just shy of what they earned last season on their way to their title.

Moving up from fifth place after the short program to win the pewter medals were Tiffany Vise and Derek Trent (Broadmoor SC). Skating to music from the musical Les Miserables, the team opened with an airy split double twist with a clean catch at the hips. The next element was their signature element, a throw quadruple Salchow, which Vise landed for the first time in competition earlier this season at Trophee Eric Bompard in France. Though Vise was able to fully rotate the move, she couldn’t hold onto the landing.

“It was one of our better performances minus the two falls,” said Trent. “We went for the quad. It was great in the warm-up. The rest of the program we were really happy with. We earned level fours and pluses on the elements.”

Vise also fell on a throw triple loop, but the team has an obvious understanding of what it takes to earn high levels and positive GOEs. The pewter medalists earned level 4 on two of their overhead lifts, their pair combination spin, and their forward inside death spiral.

“It’s a shame that we missed that second throw,” admitted Trent.

“We did all of the other elements and executed them well, and that all adds up,” said Vise optimistically. “We couldn’t let the mistakes affect the program, and we didn’t, so that is something to be proud about.”

Skating in the penultimate group, Vise (21) and Trent (27) had to wait until after the leaders skated to see if their competition score of 161.20 points would stand up. In the end, the team earned a ticket to compete in their first Four Continents Championships, and was also named as first alternates to the World Championships.

Finishing in a disappointing fifth place, are last year’s pewter medalists Amanda Evora (Southwest Florida FSC) and Mark Ladwig (Red River Valley FSC), who dropped one spot after the short program. The duo opened with a bizarre fall on their attempt at a split triple twist which took the wind out of their sails almost immediately.

“I just caught an edge when I stepped forward, and I started to stumble” explained Ladwig. “Amanda tried pulling me up, but it didn’t work.”

Evora struggled with both triple throw jump attempts as well, pinching forward on both the Lutz and Loop.

“I think that we had a lot of mistakes that we did not want to do,” said Evora. “We definitely did not give up, and sometimes it just happens.”

The new team of Caitlin Yankowskas (Colonial FSC) and John Coughlin (Kansas City FSC) showed that they are a team with great potential, finishing sixth in only their second competition together.

Yankowskas added, “We just wanted to have a strong showing here, and prove that we can be contenders for medals next year.”

The 2008 Midwestern Sectional champions showed promise on their singles elements, and are attempting the big tricks with varying success. Though Yankowskas (17) and Coughlin (21) struggled with their levels on many of their elements, they plan to work on increasing their difficulty as their partnership develops over the off season.

“I think that we are taking steps in the right direction consistently,” Coughlin stated. “Every time we come out on the ice, we want to perform well, and this was a big step for us.”

The team landed a nice throw triple loop and showed a credible effort at a split triple twist to score a competition total of 153.80 points. In doing so, the team was named as second alternates to the Four Continents Championships team and the third alternates to the World team.

Skating for redemption, Naomi Nari Nam (All Year FSC) and Themi Leftheris (Los Angeles FSC) skated a much improved performance over their short program to finish in seventh place. After a disastrous short program, last year’s bronze medalists recovered to show that they are on their way to recovery after a difficult autumn.

Nam (22) and Leftheris (25) opened strong with a split triple twist and beautiful side-by-side triple toes, but then played it safe throughout the rest of their program. They were eighth after the short program (145.89 points), and were named as third alternates to the Four Continents Championships team.

Chloe Katz and Joseph Lynch (The SC of New York) slipped one place to finish in eighth place overall, while Bianca Butler and Joseph Jacobson (All Year FSC) recovered to move up to ninth after a nice free skate that propelled them to being named to the World Junior Championships team.