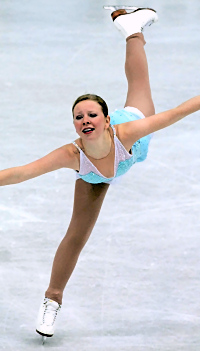 The U.S. ladies dominated the podium in this event, with Rachael Flatt capturing the gold, and teammates Caroline Zhang and Mirai Nagasu placing second and third, respectively.

Flatt, whose presence seemed to fill the arena, skated with joy in her routine to Romantic Rhapsody by Mathieu. The 2007-08 JPG Final silver medalist produced a solid routine which featured a total of seven triple jumps, however, she was penalized on a triple Lutz for use of the wrong take-off edge.

The U.S. silver medalist displayed very good level 3 straightline footwork, and earned a level 3 on all of her spins as well as an excellent spiral sequence. Flatt placed first in the long with a new personal best 112.03 (61.74/50.29) points, and with a total score of 172.19 points, placed first overall to win the gold.

“I think we all skated really well,” said the 15-year-old. “It was a great competition and I’m really proud to be here. Today I really wanted to achieve my goals and that’s what I did. I really wanted to do all my jumps and really skate my heart out. Going into every jump, I knew that I trained very well and that I could do it. I really went out and attacked today, and I think that helped me skate as well as I could.”

Zhang skated a serene program to Ave Maria by Franz Schubert which was highlighted by exquisite spins and spirals. The defending champion opened with a triple flip-triple toeloop, but then was penalized for use of the wrong take-off edge on her triple Lutz-double toeloop. She was also dinged again for a second triple Lutz later in the program. Despite an underrotated triple loop (in combination with a double toeloop-double loop), the American otherwise landed two solid double Axels.

“I think we all skated really well,” said the 14-year-old, referring to her teammates. “I could have skated a little better. I’m excited for all of us to medal.”

“I’ve had a couple of things coming in,” Zhang continued. “Before I came, I was injured. I had a hematoma (a localized swelling filled with blood resulting from a break in a blood vessel) and I sprained my back, but they got better. But when I came here at one of my practices, I fell really hard and I got another hematoma. It’s been bothering me and I’m just glad I managed to get past it.”

Overnight leader Nagasu stayed in character from beginning to end in her delightful routine to excerpts from Coppelia by Delibes. The U.S. champion delivered a solid double Axel which was rewarded with +1.14 GOEs. She went on to land three clean triple jumps, but underrotated a triple flip, and was also penalized for use of the wrong take-off edge on both triple Lutzes (one of which she stumbled out of).

“I’m looking forward to having others with these two young ladies,” she continued, which drew laughter from the press as Nagasu is 14-years-old.

The youngster felt that this competition was a good way to end her season, despite the pressure of going into the Long Program as the leader. “I learned something. Going into the short program I had nothing to loose and everything came through for me, but in the long program, I think I let my nerves take control of me instead of me taking control of them. [This] disappoints me a little bit, but overall I’m happy with my skate.”

The top three U.S. ladies realize they may have a “flutzing” problem (use of the wrong take-off edge on a Lutz jump), as they were all penalized for it at some point in their long program.

“I haven’t been struggling with the edge take-off all season,” said Nagasu, “but I was dinged on it at this competition. So even though I’m not going to focus, focus, focus on it during practice for next year, I’m going to keep it in the back of my mind.”

“For me, I can do it on the correct edge in practice,” said Zhang. “I want to get a lot better for next season along with a couple of other things.”

“My Lutz is still a little inconsistent,” admitted Flatt. “My coach and I actually have been working on that all season. This spring definitely we’re going to grind that and not going to let anything distract me from getting the edge better.”

Jenni Vähämaa of Finland attacked her performance to Rachmaniov’s Rhapsody on a Theme of Paganini which showed good choreography and edges. The 15-year-old fell on a triple flip and had problems with a triple toeloop-triple toeloop combination, but otherwise produced a solid program.

The 2007 Finnish Junior champion also displayed an excellent level 4 spiral sequence, two very good level 4 spins and level 3 circular footwork. She earned 92.24 (47.08/46.16) points for a fourth place finish in the long, and moved up from sixth to fourth place overall with 142.54 points.

Japan’s Yuki Nishino gave a balletic performance to Tchaikovski’s Sleeping Beauty which featured a triple Lutz-double toeloop, as well as very good level 3 circular footwork. However, the 2007-08 JPG Final bronze medalist was penalized for use of the wrong take-off edge on a triple flip, and made errors on three other jump passes. The 14-year-old otherwise impressed with an excellent level 4 layback spin and spiral sequence, earning 85.29 (40.51/44.78) points for a sixth place finish in the long. With a total score of 139.44, she slipped from fourth to sixth place overall.

Katarina Gerboldt of Russia, who stood in 18th after the short, placed seventh in the long with 83.28 (45.51/37.77) points, and moved up to ninth overall with 126.37 points. The 18-year-old showed good speed in her routine to Sheherezade which featured a triple flip-double toeloop-double loop and triple toeloop-double toeloop combination.

Germany’s Sarah Hecken placed eighth in the long with 82.33 (44.73/37.60) points, and moved up from 11th to eighth place overall with 128.45 points. The 14-year-old landed a solid triple toeloop-triple toeloop which earned a +1.00 GOEs, but singled an Axel and a Salchow. The reverse jumper also produced a double Axel-double toeloop-double toeloop combination, as well as level 3 straightline footwork.

Joshi Helgesson of Sweden placed ninth in the long with a new personal best of 81.36 (44.88/37.48) points. The 14-year-old expressed the character of her Arabian music very well, showing decent speed and flow, however, she underrotated and fell on a triple flip and made minor errors on several other jumps. With a total score of 130.46 points, the student from Tibro moved up from eighth to seven place overall.

Canada’s Myriane Samson earned a new personal best of 81.18 (44.38/36.80) points for a 10th place finish in the long and overall (125.91 points). The 19-year-old from Quebec exhibited good power and speed in her routine, however, she popped a loop, underrotated and put her hand down on a triple Salchow, and underrotated and used the wrong take-off edge on a triple Lutz.

Despite the errors, the Canadian improved on her 18th placement from last year, and her 10th place finish overall gives Canada two slots for the ladies next year.

Elena Glebova of Estonia placed 11th in the long, and slipped from fifth to 11th place overall. The 17-year-old fell on a triple loop and double Axel, and struggled with most of her other jump passes.